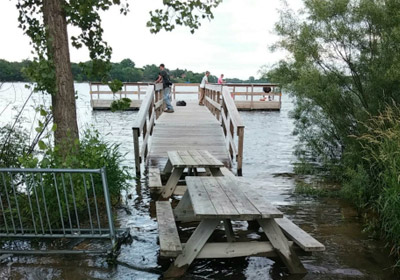 While state and local governments expects to receive federal aid, it’s unclear whether homeowners will receive any relief.
July 13, 2014

Cost estimates of flood damage to Minnesota’s public facilities and infrastructure grew from $32 million to $48 million over just the past two days–and authorities expect that number to continue rising, MPR reports.

Governor Mark Dayton Tuesday had predicted estimates to increase as damage assessments continued to come in, and while reports are still early, it appears as though the total damage from the state’s recent flooding will far exceed the $7.3 million threshold needed to qualify for a federal disaster declaration.

According to InForum, only half of the 48 counties that have reported damage to public facilities have submitted damage estimates to state officials. The paper also reports some damage in northern Minnesota has not been calculated because the water is still too high.

Finance & Commerce says Carver and Scott Counties each have about $9 million in damage so far – the highest totals in the state at this point.

In Minneapolis, Senator Al Franken will visit the much-photographed mudslide behind the University of Minnesota Medical Center, Fairview Thursday, KSTP reports. Franken is then expected to meet with officials and give and update on broader flood recovery efforts, the station says.

Dayton said he hopes to submit the request for a federal disaster declaration by the end of next week.

The disaster aid would only help pay for repairs to public infrastructure–public roads, bridges and other structures–not for damage to homes and businesses.

The state has a $3 million relief fund to help match federal disaster aid, and Dayton has said he may call a special session of the Legislature if more money is needed.

According to MPR, officials are saying damage could have been much worse.

Communities are reportedly better designed to withstand floods compared to decades ago, and the station details a number of cities around the state that likely dodged a bigger damage bill thanks to proactive efforts.