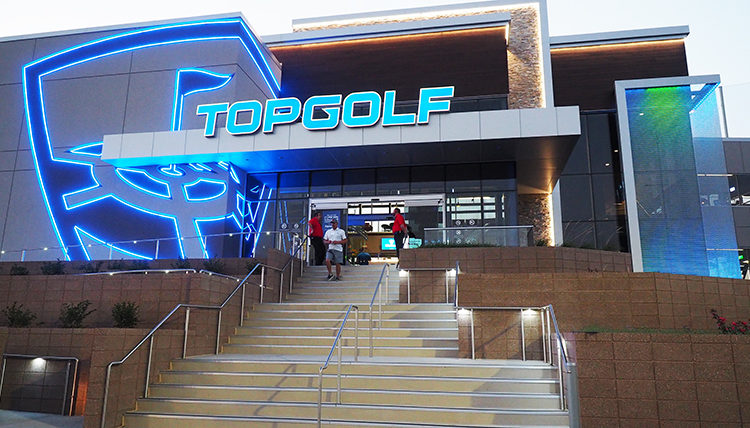 The exterior of the 65,000-square-foot Topgolf facility in Brooklyn Center. ( Photo by Sam Schaust)

The golf-centric facility will open this September, but an official open date won’t be revealed until next week.
By Sam Schaust
September 13, 2018

Despite being home to the largest population of golfers per capita in the U.S., Minnesota will become only the 22nd state to receive a Topgolf site when it officially launches this September. The full-service venue aimed at golfers and non-golfers alike first appeared at the start of the millennium in Watford, United Kingdom. The concept has exploded in popularity since its founding and now boasts 41 locations in the U.S. with another 14 currently under construction (not counting its existing or planned sites in the U.K., Australia, Canada, Mexico and the United Arab Emirates).

Each of the 102 bays — 34 on the three levels at the Brooklyn Center Topgolf — is climate controlled, similar to its existing sites that allow for year-round play. The bays are open air, though, so the outdoor elements will play a factor.

Topgolf in Brooklyn Center: By the Numbers

Over half of Topgolf's customers are first-time golfers

Price starts at $25 for one bay for one hour

“I’ve never seen anyone at a cold weather venue with a winter jacket on… A windbreaker is all you’ll need,” she tells TCB. “Our heating system is pretty extreme. We have other cold weather venues—Chicago, Salt Lake City, Denver—and they have two industrial heaters. We have three here.”

Strube says Minnesota is the coldest state where Topgolf has built a facility. With that in mind, the Topgolf construction team added wind panels between certain bays to help control the climate and take the edge off those biting winter breezes.

Topgolf made headlines last July when it announced plans to hire 500 employees for its Brooklyn Center site. Unique to Topgolf is its hiring methods which skip the formal interview in favor of group activities, games, intel gathering tasks and interactive panel interviews.

“We were looking for personality and energy,” Strube says. “Everything else can be taught or learned, but those are the key ingredients.”

In about two weeks’ time, she adds, Topgolf was able to find its 500 staffers and then some.

Topgolf’s official launch date in Brooklyn Center won’t be revealed until the morning of Monday, September 17. Signs at the preview event claimed that it would open in the month of September.

“I’m going to guess we’ll be a pretty popular once we open our doors, so the best way to get it would be to make a reservation,” Strube claims. “And I’m projecting we’re still going to be pretty full come winter.” 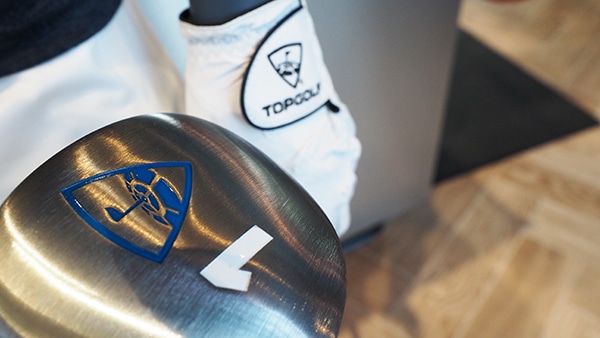 Golfers are free to bring their own clubs, although clubs are available at each bay. Left-handed or junior clubs can be requested as well. (Photo by Sam Schaust) 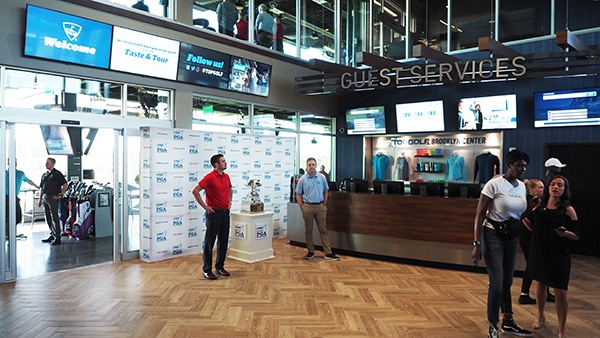 Stationed next to the guest services desk was the trophy for next year's KPMG Women's PGA Championship, which is set to take place at Hazeltine National Golf Club in Chaska. (Photo by Sam Schaust) 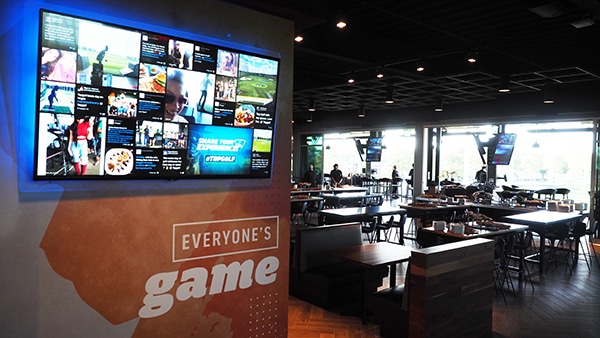 Social media experiences are shared on a screen next to Topgolf's dining area next to its front entrance. (Photo by Sam Schaust) 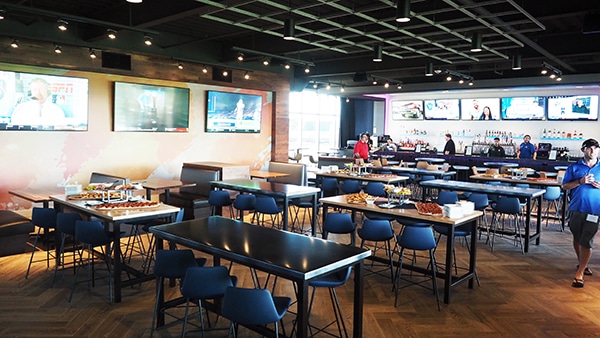 One of the larger dining areas in Topgolf Brooklyn Center. This one sits next to the entrance and guest services desk. (Photo by Sam Schaust) 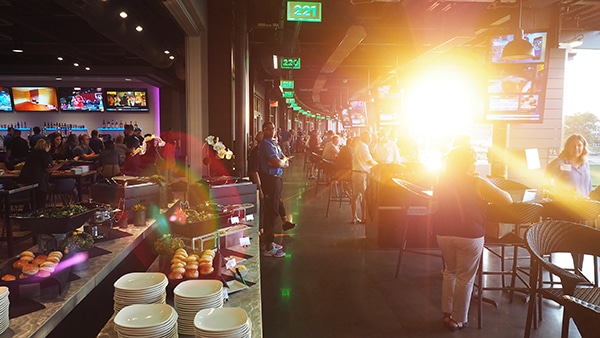 Wait staff are at the ready behind the 34 golf bays on each level. (Photo by Sam Schaust) 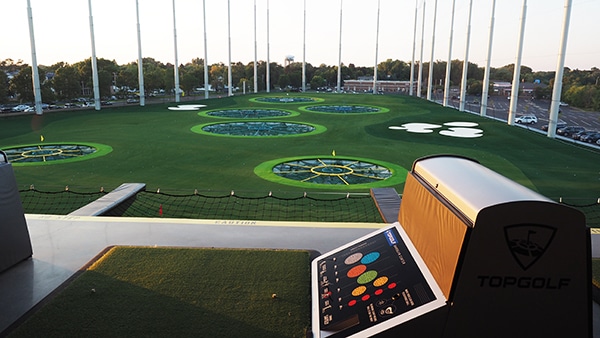 A third-floor view of the outfield, which stretches for 215 yards. But will golfers be able to hit over the net? “That's not a possibility,” says Topgolf Brooklyn Center marketing manager Amy Strube. (Photo by Sam Schaust) 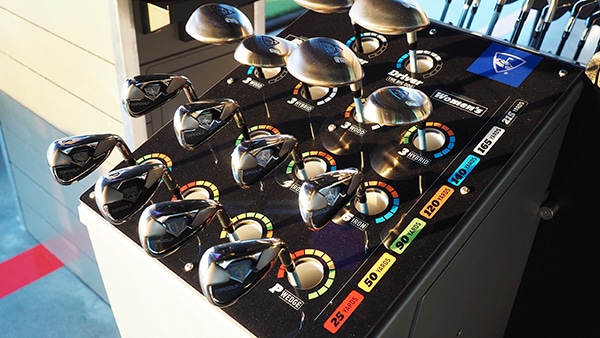 Each bay is outfitted with a full set of right-handed clubs. (Photo by Sam Schaust) 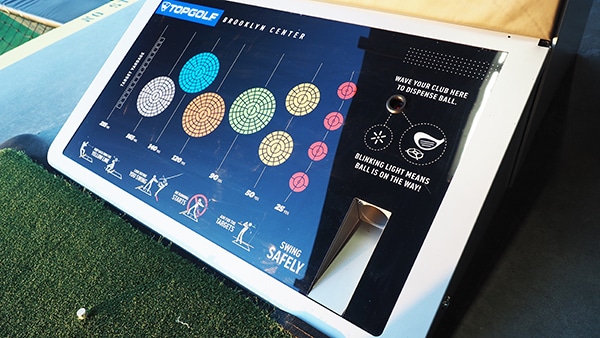 Golf balls and clubs are equipped with microchips. Holding a club up to the display here distributes a ball. The microchip within the ball sets off a sensor within the scoring zones to attribute points to the appropriate player. (Photo by Sam Schaust) 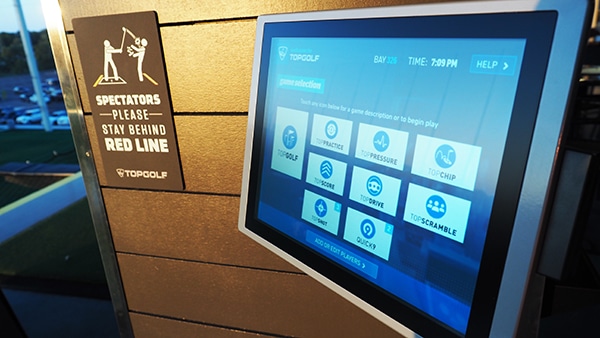 Seven game options (as well as a practice and “quicky” mode) are available to play, which can be selected on a screen next to each bay. (Photo by Sam Schaust) 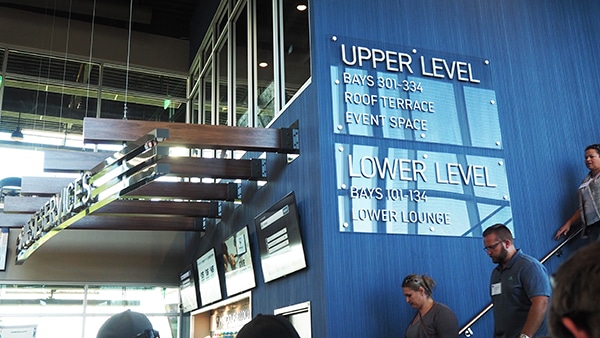 Each floor can be accessed by stair or elevator. (Photo by Sam Schaust) 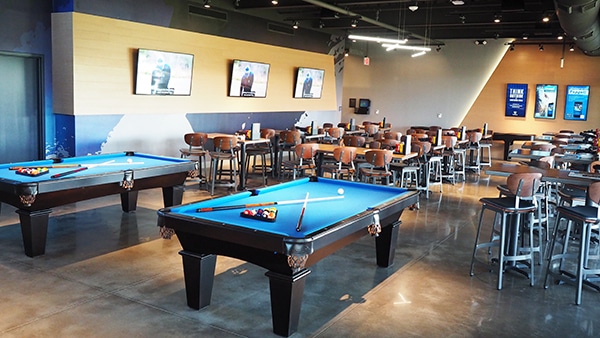 Alternatives to golf are aplenty at Topgolf, including billiards, shuffleboard, foosball and access to Xbox games. (Photo by Sam Schaust) 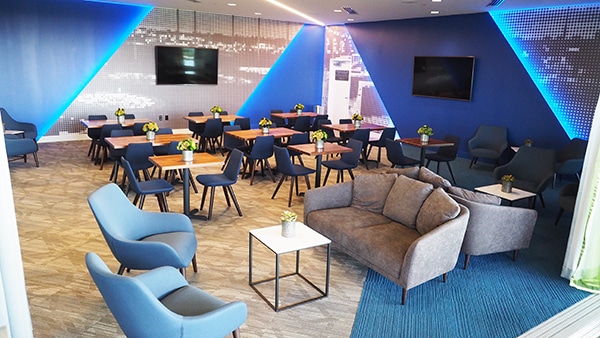 Several banquet, dining halls and break rooms are available for events or those that aren't golfing. (Photo by Sam Schaust) 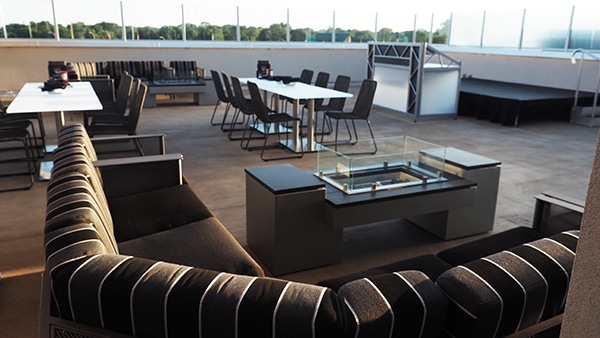 On the third floor is an open-air terrace with ample seating. (Photo by Sam Schaust) 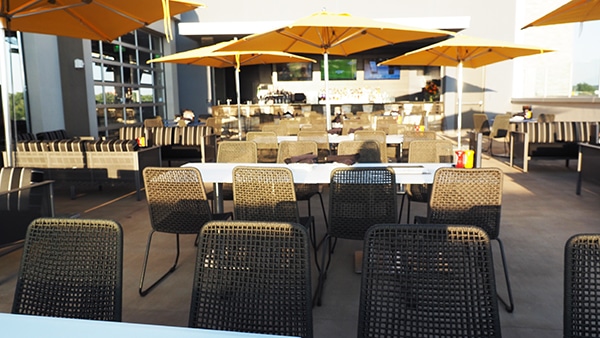 Another view of the outfield. (Photo by Sam Schaust) 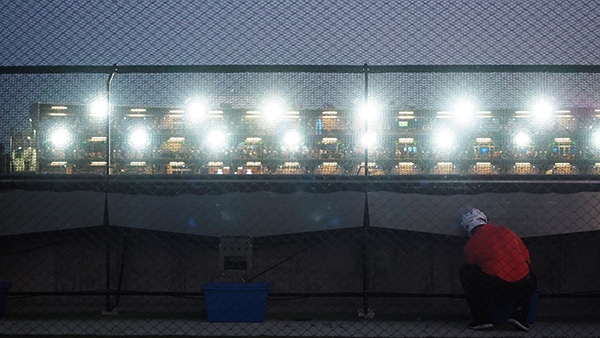 Opposite from the Topgolf facility are the exit points of pipes that run from the scoring zones and into buckets. (Photo by Sam Schaust)