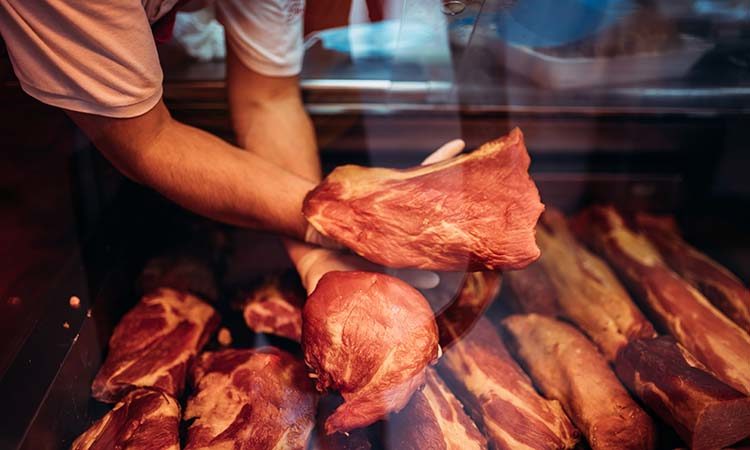 Minnesota butcher shops are closing as their workers age out of the business. Shutterstock

Local livestock farmers are finding it more difficult to get their animals processed, in part due to an aging workforce. Here's how the industry is working to address the shortage.
By Gene Rebeck
October 06, 2022

In addition to his work as a teacher and school principal in Madison in western Minnesota, Kipp Stender has raised cattle for the past 22 years. In October, he purchased The Country Butcher, a meat processor and butcher shop in nearby Dawson, a town about 150 miles west of the Twin Cities.

“I just love to connect buyers with producers—for people to purchase a live animal and process it the way they want it processed,” Stender says. “And then supplying that quality meat without having it shipped across the country before you buy it on a shelf in a store.”

The Country Butcher’s owners “had been trying to retire for three to five years,” he adds. If Stender hadn’t bought it, “they would have closed it.” Losing an operation like The Country Butcher would have been a big loss for its region’s livestock farmers as well as for shoppers. Other parts of the state have been hurt by such a loss. This summer, a report funded by the University of Minnesota and the Minnesota Department of Agriculture argues that small and midsize livestock growers have been experiencing a “bottleneck” getting their hogs, cattle, and other animals processed. The reason? Meat-processing plants have been closing, and those that are still open are having trouble keeping up with the demand. It’s a problem the pandemic has intensified.

Paul Sobocinski, a livestock farmer from Redwood County, helped lead the drafting of the report. He also has been experienced the bottleneck first-hand. Sobocinski provides homegrown meat directly to friends and family and has always used small-town processors.

“When Covid hit, a lot of us who were livestock farmers saw a real direct impact on access to our markets,” Sobocinski says. In addition, “a number of the larger producers lost their slots at big processing plants.” The problem has been made worse by the fact that processors are aging, and many haven’t been able to find buyers for their operations. As a result, those operations simply shut their doors.

Sobocinski, who also has been involved in rural and farm policy, decided to take action. He put together a proposal to the University of Minnesota’s Regional Sustainable Development Partnerships (RSDP), whose mission includes helping economic development in rural Minnesota. In his proposal, he requested funding to put together a study of the problem. “We felt that when you’re looking for solutions for farm issues, go talk to the farmers,” he says. “In this situation, we also needed to talk to the processors.” This became part of the proposal.

When RSDP accepts a proposal, it provides not only some funding but also the services of a U of M graduate student. To help with this report, Sobocinski and his co-authors worked with Maya Benedict, who is working towards a master’s degree in public health administration and policy. In addition to her studies, Benedict brought distinctive experience to her work: For six years, she was a butcher and operations manager for a St. Paul butcher shop.

Simply stated, the meat we all buy has to be processed in a plant that’s been inspected either by the U.S. Department of Agriculture or the state of Minnesota. The latter plants often are referred to as “equal-to” facilities—that is, their level of inspection is “equal to” the USDA. In conducting research for the report, “we found that there were very few locally sourced meat products being sold at retail counters,” Benedict says. “And that includes both USDA and equal-to inspected plants.”

The report identifies a few factors why that’s the case. Perhaps surprisingly, one of the biggest is cost. In general, “local meat is more expensive to source,” Benedict says. The “big four” meat processors—JBS, Tyson, Cargill, and National Beef—have the scale and distribution to provide lower-cost beef, chicken, and pork. They’re also able to supply precut meat that’s conveniently boxed for the retailer. “Boxed meat is cheaper,” she adds. “You get exactly what you need. If you need 15 loins because you know that’s what’s going to sell—you get 15 loins.” What’s more, the store doesn’t need to train its own butchers to break down whole animals.

So why should small processors be supported and helped? One reason Sobocinski cites: Large meat-packing plants also were significantly impacted by Covid, and events similar to the pandemic are likely to recur. “It makes sense to have more diversification,” he says. In addition, local processors provide “a more direct benefit to local farmers. It also establishes more local resiliency.” What’s more, Benedict notes that “people increasingly want to ‘eat local.’”

There still are shops like Stender’s that are sourcing largely local meat. And many counters, like Stender’s, sell what they process. But their numbers have been decreasing, and they’re likely to decrease further. “This is a very important time for local food systems in the meat-processing industry, because you are seeing people age out of the business,” Benedict says. “It’s difficult to hire and retain trained employees.”

The report she worked on offers a broad range of recommendations. “There are so many ways that we can approach both preserving and renovating the meat-processing industry so that it continues to support local food systems and rejuvenate local food areas,” Benedict says.

The authors also hope the report inspires more research into the problem, as well as practical solutions—for instance, ways that local meat processors can improve the ways they serve their buyers. “We don’t want those local shops that are a very important part of the community to lose their business because they don’t have a marketing process or a process that works effectively,” Sobocinski says.

One of the challenges the report addresses is how to get more people—particularly immigrants with experience working in Minnesota meat plants—interested and trained in meat processing so that they can operate their own facilities. The demand is there. This fall, Ridgewater College in Willmar introduced a meat-cutting certificate course that attracted 10 students. “We were approached by local and regional meat processors, butcher shops, meat lockers, corporate meat-processing facilities to see whether there was an opportunity for us because of our strong ag programs,” says Jeff Miller, the college’s dean of instruction.

Ridgewater plans to expand the program to include certification in meat processing (including curing, smoking, sausage making, and custom cutting) and also in entrepreneurship—“functions needed to be a successful business owner,” Miller says. The program also is designed so that students outside the Willmar area can attend lectures online and work with facilities in their area to learn butchering skills.

The program “is absolutely essential to meet a need in our region and in our state,” says David Endicott, dean of Central Lakes College’s Staples campuses. “We discovered there were only seven college-level meat-cutting programs in North America at the time. The last one in Minnesota was in Pipestone, which closed in 2006.”

There also has been more legislative attention on meat processing to help more processors like Kipp Stender meet demand. Stender, for instance, received a $23,000 Minnesota Department of Agriculture grant to expand and update his facility, including enlarging his cooler space and purchasing a new carcass-splitting saw.

It wasn’t an easy transition, but after a year Stender feels more confident about his business’s future. The previous owners processed about “three beef and four to five hogs a week,” Stender says. He and his four employees now process around “nine beef and 11 hogs” a week. (The Country Butcher also processes lamb and venison.) Stender is now exploring shipping beef and pork from his operation to the Twin Cities.

Stender says that he’s not against large livestock and processing operations. “They provide a quality food supply for people around the world at a reasonable cost,” he says. But he sees small family farms and local producers meeting demand—and also offering ways to lower food costs. With larger producers, he says, “the product travels more miles multiple times, more distributors or vendors in the middle and multiple taxes on the same product every time it changes hands.”

“Meat processing is vital—food security is vital,” Sobocinski says. “So it makes sense for this state and this country to invest in it.”