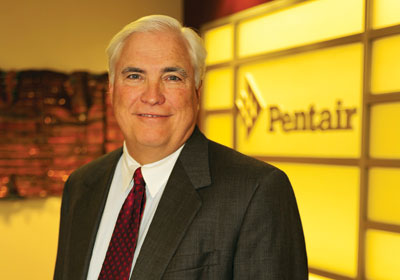 In October 2011, Rimage Corporation, an optical disc publishing company based in Edina, acquired California-based enterprise video communications firm Qumu. Like most good mergers or acquisitions, this one was a result of the initiating company’s business plan.

Rimage CEO Sherman Black says his company’s strategy was to augment its existing products with cloud-based delivery. He plans to make an internal investment in the technology, but says that will take time. A more expedient way was to acquire companies that were already good at it.

“We started by finding a good investment banker to help us with the mechanics of sorting through the targets,” Black says. “We interviewed about seven bankers. We gave them an idea of what our strategy was, and then we picked the one that we thought most understood the market segment that we were looking at. Then we had a very rigorous process, where they gave us kind of a landscape survey of all the different targets that are out there.”

Oakdale-based technology firm Imation has a similar approach to acquisitions. Its corporate development group takes the lead in looking at potential acquisitions, including acquisitions of technology, intellectual property, skills, and entire companies. Imation identifies the segment of its market that it wants to expand (currently, its secure and scalable storage business), and then corporate development figures out the best way to make it happen.

“We paint a vision of where we think this category is going,” explains President and CEO Mark Lucas. “Then we do an internal skills and capabilities assessment on what we have in house. If there are seven different technologies we need for this category, how many do we currently own, or have capabilities to develop, and which ones are foreign to us? As we do this internal assessment, we start to see gaps, and then we decide how we’re going to fill those gaps. Do we recruit people? Do we just develop them internally? Do we acquire companies?” Imation made five acquisitions in 2011 to fill the gaps it perceived, ranging from intellectual property to entire businesses.

The reasons for a merger or acquisition often dictate the nature of the transaction. A company that wants to acquire a competitor's talent or customer base will usually acquire the target's operations. But a company that wants only technology, or the opportunity to work with one key person, may decide to acquire just the target’s assets.

In October 2011, Eden Prairie–based MakeMusic, Inc., which sells software tools for music composers, arrangers, and teachers, acquired selected assets of Recordare, LLC. MakeMusic purchased Recordare’s MusicXML, a tool for publishing interactive sheet music on the Internet, as well as the Dolet plug-ins that go with it. It also hired the inventor of MusicXML. As part of the deal, Recordare was dissolved as a company.

“We didn’t purchase operations, we purchased just technology, so the due diligence process was quite a bit less,” says MakeMusic CEO Karen Van Lith. “If you’re purchasing an actual operation, you need to validate that you have real customers and real receivables, and that the operations are going to continue to work well.”

Instead, she was buying a known quantity. “This was technology we knew well, and all the bugs were already worked out of it,” Van Lith says.

Throughout its history, Pentair in Golden Valley has transformed itself through acquisitions and divestitures. It began as a weather balloon manufacturer and morphed several times, eventually becoming a broad-based technology company with emphases in categories such as water filtration and equipment protection products.

Randall Hogan, Pentair’s chairman and CEO, says he evaluates potential acquisitions—such as the company’s 2011 purchase of the Clean Process Technologies division of Netherlands-based Norit Holding, BV—based on five criteria. First, he says, he runs the numbers, looking at the target’s internal rate of return and the net present value based on the synergies they could get by combining forces. Then, he asks whether the acquisition fits the company’s current strategy. Those two are the obvious criteria that everyone uses, he says; but from there, it gets more complicated.
“The third question is, ‘Why us?’” Hogan says. “In acquisitions, particularly when there are auctions, there’s a whole industry set up to make sure you pay too much. So if you’re going to be the winner in an auction, there has to be a reason why you have the ability to pay the most and still create value for your own shareholders.” Fourth, Hogan says, is the question of whether there’s a credible plan to integrate the new business. And fifth, who is going to do it?

“It isn’t enough to just have a plan,” Hogan says. “Do we have the depth and breadth of talent? Frequently, that’s where it’ll fall apart. Even if you can make the numbers work, the plan won’t work because the synergies are too high-risk, or you don’t really have the people that can pull it off, or you don’t know them well enough.”

Then there’s the question of whether the target company’s assets hold up under scrutiny, and whether its resources fit with the acquiring company’s. Archie Black, CEO of electronic supply chain firm SPS Commerce in Minneapolis, describes the due-diligence process he and his colleagues went through during the acquisition of San Diego–based Direct EDI in May 2011.

“First there’s the legal part of due diligence,” he says. “Then there’s the product piece, making sure that the product is what you thought it was. That was a little bit easier in this case, because we understood their business extremely well since they were a direct competitor. Then you have the financial due diligence—making sure they’ve got audited financials and that you understand their trends, their customer acquisitions, their customer losses, and whether they’re making money. And then you’re also building pro formas [hypothetical financial figures] for when you’ve combined the two businesses. What do you think you can do with their customers? Can you upsell them? Can you put their people to use in other ways that will save you money?”

There are aspects of due diligence that some companies forget about, Black says. One is pricing models. If, for example, a target company’s prices are higher than the acquiring company’s, there will be a revenue loss when that company’s clients move to the lower price structure.

And then there’s IT. The two companies will need to evaluate the pros and cons of their respective platforms and product sets, and decide whether to migrate users to one system or hybridize the two systems to create a best-of-breed platform.

Lucas agrees that compatibility should be part of the assessment process. “We look at employee benefits and compensation programs—those are important,” he says. “We need to look at business processes. We need to look at the ERP program. For example, we’re run by Oracle. Other companies could be run by SAP or J. D. Edwards. Is that compatible from a reporting standpoint? Because as a public company, we have certain reporting requirements . . . . We have to make sure that the reporting processes are strong enough to allow us to comply with those laws.”

The due-diligence process almost always turns up something unexpected. But not all companies react to the findings in the same way. Bob Senkler, chairman and CEO of Securian Financial Group, Inc., in St. Paul, says it is his company’s policy to buy only well-run organizations. “We don’t buy problems,” he says. “If they have a lot of embedded sales, compliance risk, or they don’t have good customer relationships and things like that, we don’t want to put our reputation at risk. Our reputation is such a big piece of our value proposition.”

But Lucas points out that there are times when a fixer-upper is a good choice. “I’ll give you an example,” he says. “If I want to get a high-flying company that’s been very successful, I’m going to have to pay a lot more for that success. If the main thing I’m looking for is a customer list, I may be willing to look at a company that’s in distress if they have a very strong customer base. Perhaps other pieces of their business are not doing well; I might be willing to discount or even discard them to get at the customer base.”
Culture Clashes

Above all, if a merger or acquisition will bring together two groups of people, they will have to get along. There’s no use acquiring talent if the “new kids” are just going to languish in their new situation—or, even worse, quit.

“When we’re out looking [for acquisition targets], we’re looking for a couple things,” says SPS’s Archie Black. “One, that they have satisfied customers, so we can put them on our platform. And two, that they have a culture that is somewhat similar to ours: They are growing to some extent, they are creating, and therefore they would fit into our culture. A status quo company just wouldn’t fit in our culture.” In general, if an acquirer changes a target company’s charter significantly, it becomes very challenging to motivate and retain its employees.

Sometimes the target company’s leaders are not a great fit. “We’re a public company, and we’ve been around a while,” Rimage’s Black says. “There are companies out there that have what I’ll call ‘serial entrepreneurs’ as their founders. A serial entrepreneur probably doesn’t want to come work inside an old, established public company. Maybe they want to go off and start another company. These are all things you have to really try and understand.”

A different corporate culture is not always a black mark. Lucas points out that it can be used as part of a strategy of shifting the culture at the acquiring institution. “One of the things we’re trying to do is evolve our culture to be a little bit more fast-paced, a little bit more willing to accept risk and faster decision making,” he says. “As a technology company, we need to be more cutting-edge than we have been in the past as a spinoff from 3M. So as I look at these acquisitions, I want to embrace smaller companies like MXI [Security, a Montreal-based company that Imation acquired in June 2011 along with 40 of its employees] that are more entrepreneurial, that are faster. I don’t want our culture to kill them. I want to basically be able to learn from them and have their culture stimulate our transformation.”

Many times, differences in corporate culture can come as an unpleasant surprise after a merger or acquisition. Culture isn’t something you can find out by reading an annual report. Sometimes employees of the organization can’t even describe it. It’s something that shows itself only through prolonged contact. Once, Hogan says, Pentair acquired a Chinese firm, thinking that it was culturally aligned with the people running it. That turned out not to be the case at all, and Pentair had to spend a lot of unanticipated time and money replacing the company’s management with its own people.

But other times, a problematic cultural difference is readily apparent, and can scuttle a deal before it even has a chance to get off the ground. “I can think of one acquisition that never happened,” Hogan recalls. “We have a foundation, and we’re proud of what the Pentair Foundation does. We have an ethos and a culture and a set of values that say that’s an important thing for us to do. We were in talks about a fairly large acquisition, and in talking to the senior people there, they not only didn’t get it, they scoffed at it. I said, ‘If this is the culture of the place, it’s a long throw from where we are.’ That was one of the reasons we backed out.”