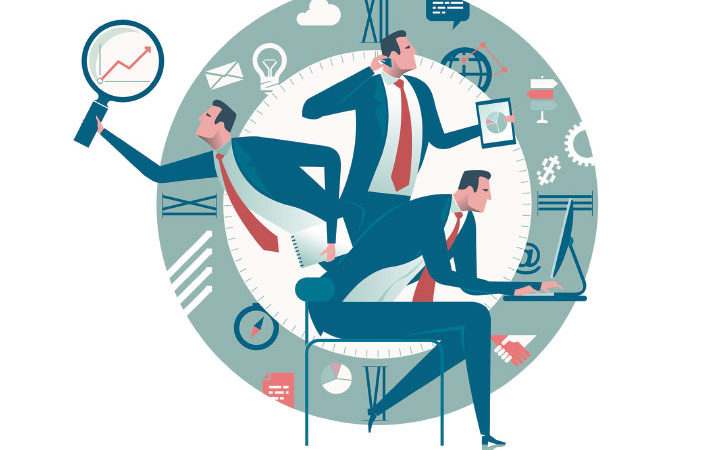 Bankers are moving forward on deals with business customers, while analysts look for signs of recession in economic data.
By Burl Gilyard
November 01, 2019

Everything’s great—really. Don’t worry about it. Focus on the positive.

So goes the recent refrain from financial service professionals. But these are jittery days for bankers, business owners and anyone trying to figure out where the economy is headed. Everyone is trying to read the tea leaves amid increasing talk of a possible recession, stock market volatility, an inverted yield curve, and world trade concerns.

Upstanding, sober bankers are loath to say things like, “This economy is headed downhill. There are only two things you can do: Pray and run.”

One banking veteran sees a disconnect between the unsettling headlines and speculation that people are seeing and hearing and the front-line experience people have with their own businesses.

“My sense is there’s kind of a ‘volatility fatigue.’ I think more of what people read and what they hear is not what their actual experience is,” says Dave Rymanowski, senior vice president in the Minnesota commercial banking group for Old National Bank. “Foundationally, most of our clients are on solid footing. We don’t see a lot of weaknesses in sectors.”

He adds that business lending during the second quarter was steady, neither up nor down. “From a volume standpoint, we’re flat,” Rymanowski says. “We think we have a solid pipeline right now but we’re also seeing some projects get pushed out for a variety of reasons.”

Old National Bank does not do much agricultural lending but is still seeing some customers who are being pinched by trade tariffs. “We do have clients that are sourcing products in Asia, and they’ve had some price increases obviously impacted by tariffs,” Rymanowski says. “Their input costs have gone up.”

In 2008, the prime interest rate dropped 400 basis points from 7.25 percent to 3.25 percent as the financial crash took hold and the Great Recession began. Rymanowski has been in the banking business for 36 years. He remembers days of much higher interest rates.

Which banks handle the most SBA loans in Minnesota? Here are annual rankings for SBA Minnesota District loans, listed by the total number of loans. The data covers federal fiscal year 2018, which ran from October 1, 2017, to September 30, 2018. 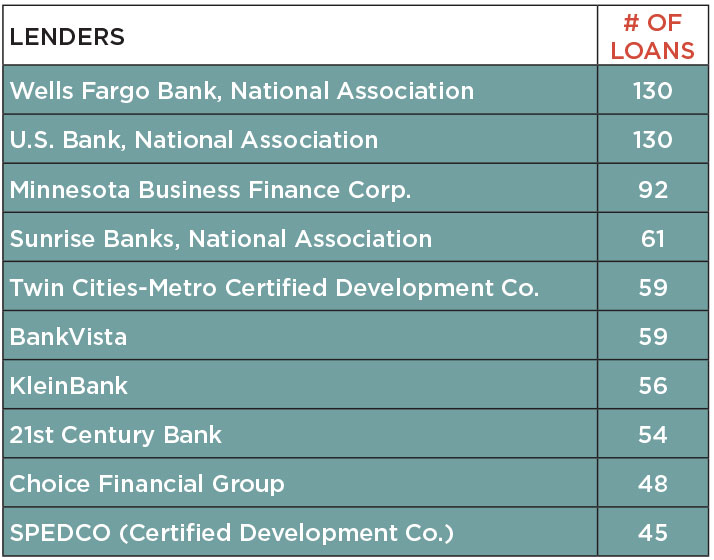 “Early in my career, mortgage rates were 16 and 17 percent,” recalls Rymanowski, looking back to 1983. “We have been in this low-rate environment for such a long time. I’m not sure what the ‘new normal’ is.”

People who aren’t old enough to have that long-range perspective may not be aware that rates remain historically low right now. The federal funds rates didn’t budge for seven years, from December 2008 to December 2015. Amid concerns about global uncertainty and slowing economic growth, the Federal Reserve cut the federal funds rate a quarter-point in July, September, and October. The moves marked the first time that rates had been cut in nearly 11 years.

“The drop in interest rates a quarter-point impacts the short-term market rates right away,” Rymanowski says. “The bank sees an immediate decrease in interest income.”

Other local bankers share this market viewpoint. Clients may be a little more worried, but business remains solid. Credit line usage remains low. The greatest concern for many business owners remains labor—finding enough qualified people to hire. Everyone knows that the economy is cyclical. After a decade-long expansion, the economy has to take a downturn sooner or later, but no one knows exactly when.

“In that market it continues to be strong, it’s still as large as it’s been,” says Jerry Baack, Bridgewater’s CEO, president, and chairman of the board, of the commercial real estate finance market.

Still, there are some ripples of concern.

“[We] certainly see some weakness in the downtown Minneapolis [apartment] market, but that’s not the type of stuff we lend on,” says Baack, of high-end, luxury multifamily projects. “Outside of that, I haven’t talked to anybody who’s really seeing any weakness.”

Baack argues that developers are savvier about financing projects today than they were before the Great Recession. “People are aware that the market’s certainly frothy, but they’re taking calculated risks,” Baack says.

The Economic Advisory Committee of the Washington, D.C.–based American Bankers Association released the findings of its biannual economic forecast in late June. The latest “median forecast” from the group was generally bullish, expecting that “economic growth will continue through 2020 at a rate near the committee’s 2 percent estimate of long-term potential growth.”

But looking beyond those projections, there are clearly concerns about the overall economic climate. The advisory committee is composed of 16 chief economists from major North American banks.

“While the outlook is positive, there are some dark clouds on the horizon,” says Robert Dye, the EAC’s chairman and chief economist for Comerica Inc., a large Dallas–based bank. “Concerns about an escalation of trade conflicts, a weakening global economy, and the potential for fiscal tightening could lead businesses to pull back on capital investment.”

And despite its projections of continued growth, the ABA survey put the chance of the economy falling into a recession by the end of 2020 at 35 percent.

End of a bull run?

“Everybody’s obviously worried about the tariffs and the global economy,” Baack says. “How long can the bull run? Clearly, the biggest challenge right now is the inverted yield curve and how low rates are.”

Normally, only people in the bond market worry about the inverted yield curve, which is defined as a market where short-term yields are higher than long-term yields. Normally, it should be the other way around. But it’s drawing increasing media coverage because the inverted yield has often been a signal of a pending recession.

“It’s busy, probably at a rate similar to the last few years. We’re seeing pretty good activity in business acquisitions,” Dolphin says. “All sectors in the metro area seem to be doing quite well on an equal basis.”

Some of the economic concerns are more industry-specific.

“I have seen a little more caution right now, partially due to tariffs,” says Matt Thompson, business banking market leader in the Twin Cities for Minneapolis–based U.S. Bank, of manufacturing businesses. “People are hesitant to expand more until the trade war with China resolves itself.”

“Everyone is concerned about retail; however, some of the smaller retail is doing just fine,” Thompson says.

Clients are increasingly asking Thompson to offer forecasts on the broader economy, but, he says, he can’t predict the future any better than anyone else.

“I think people are more cautious, but we haven’t really seen [a business loan pullback] manifest itself,” says Mark Lucke, Sunrise’s chief sales officer. “Our volume’s been up,” he says, and notes that the Twin Cities economy has been robust.

The commercial real estate business remains strong, but Lucke adds that “lenders are being a little more strategic in what they’re financing” due to concerns over whether borrowers are overleveraged.

Rymanowski, Thompson, Dolphin, and Lucke have a good read on the market. U.S. Bank, Sunrise Banks, 21st Century Bank, and the former KleinBank all ranked among Minnesota’s top 10 SBA lenders for federal fiscal year 2018, ranked by the number of loans. (See sidebar.)

At the end of the day, no one knows where the economy is headed.

“From a business owner standpoint there’s a lot of uncertainty,” Rymanowski says.

Business is cooling a bit, but it’s not a crisis.

“I would say there’s probably some moderation. Certainly not ‘the sky is falling,’ we’re not seeing that,” Rymanowski says. “We’re not hearing that from businesses we’re working with.”

The U.S. Small Business Administration was closed for five weeks during the federal government shutdown from December 2018 to January 2019. During that time, no new SBA loans could be approved for small business owners trying to secure capital through loans. But despite that downtime, SBA lending in Minnesota was actually up a solid 11 percent for the first three quarters of federal fiscal year 2019.

Minnesota has more SBA lenders than any other state in the U.S.

Nancy Libersky, SBA’s Minnesota District director, notes that several sectors posted strong gains. “For FY19, by industry, the largest increases compared to FY18 have been in accommodations and food services (up 12.5%); arts, entertainment, and recreation (up 25.2%); health care and social assistance (up 13.2%); manufacturing (up 25.7%); and transportation and warehousing (up 76.2%). These increases seem to outweigh the declines in agriculture, forestry, fishing, and hunting (down 59.1%); and professional, scientific, and technical services (down 23.7%).”

SBA 504 loans are used for purchasing, refinancing or constructing commercial real estate, and for long-term fixed assets. SBA 7(a) loans, the most popular category, are used to finance the acquisition or expansion of a small business. The SBA microloan program provides financing of $50,000 or less for women, low-income, veteran, and minority entrepreneurs. The microloans are handled through intermediary lenders, typically nonprofit certified development organizations. 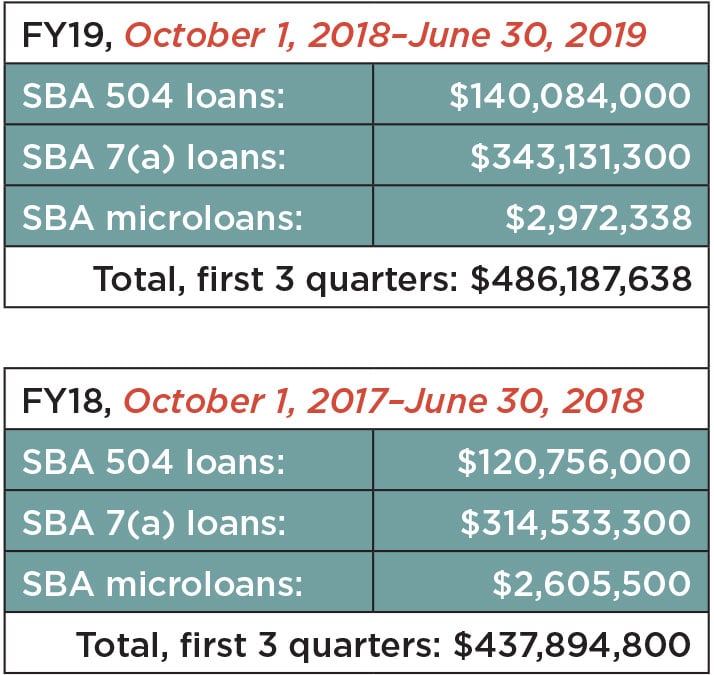