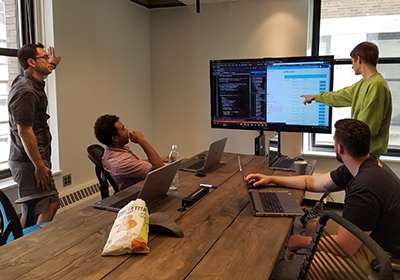 Note: This story is part of a bigger feature on Minnesota's labor shortage. To read about demographics affecting middle management positions throughout the state, click here.

The “silver tsunami” of baby boomer retirements will create waves across Minnesota’s economy, but there is a particularly strong concern over worker shortages in the technology sector.

The North Star state must add thousands of employees in STEM fields just to keep up with retirements and new developments. But if the Minnesota High Tech Association has any say in the matter, the state’s tech industry won’t be a victim. MHTA is focused on ensuring there will be a strong supply of talent with science, technology, engineering and math backgrounds.

For several years, MHTA’s consortium of more than 350 companies, educational institutions and government agencies has been building the SciTechsperience internship program. It connects college students or recent graduates with small- and medium-sized STEM companies throughout Minnesota to tackle big research and development projects.

Mobile Composer is one such company that has taken part in the program. The Minneapolis-based startup creates enterprise software. It has been operating with seven full-time employees. Through MHTA’s SciTechsperience internship program, it was able to increase the number of people developing its flagship product, Orchestrate.

“We’re always looking for ways to attract the best talent to our company,” says Catherine Gillis, cofounder and chief marketing officer of Mobile Composer. “We saw that participating in this program would be an excellent way to do that and have them work on a real-world project.”

But it’s not just the ability to tap into a pool of talented young students looking for work that attracts employers to the program. There’s a financial incentive as well: the Minnesota Department of Employment and Economic Development (DEED) pays for half of an intern’s salary, significantly lowering the financial burden on these small companies. The match is capped at $2,500 per intern.

“The vast majority of [SciTechsperience] companies have under 25 employees, so they wouldn’t necessarily be able to compete with a larger company in terms of being able to offer an internship,” says Margaret Anderson Kelliher, a former Minnesota House speaker and the CEO of MHTA. “These companies are often connecting with third- or final-year students who are ready to be hired when they’re done.”

By 2020, Anderson Kelliher says, Minnesota will have to fill an estimated 154,920 “high-wage, high tech jobs.” The SciTechsperience program is one strategy for helping young people enter STEM fields.

“The intern program is a great way to get to know some young, enthusiastic and local talent prior to making a hiring decision,” says Steve Yanda, a vice president with The Actives Factory, which has a production facility in Two Harbors and a sales office in Hopkins. The company is a wholesale supplier of natural actives and compounds extracted from birch bark.

“We have three interns, one engineer and two chemists,” he says. “All three of them are helping us to meet the requirements of a National Science Foundation grant.” Interns are paid $15 to $18 an hour at The Actives Factory. MHTA requires companies involved in SciTechsperience to pay interns at least $12.50 an hour.

The technology sector already is a powerful force in the Minnesota economy, employing around 142,000 people—6 percent of the private-sector workforce, according to federal labor statistics. Most of those employees—about 113,000—work in the Twin Cities. But that’s far short of the thousands of additional tech workers that Minnesota’s employers will need in the coming years, especially if companies want to pursue rapid growth strategies.

Employment in the tech sector is beneficial to Minnesota’s economy because it provides well-paying jobs. The average worker’s salary is $77,880 in STEM fields, according to Anderson Kelliher, significantly higher than the $43,460 average paid to Minnesota’s workers in non-STEM jobs.

MHTA has set a goal of making Minnesota one of the top-five tech states in the nation. Historically, Minnesota has been home to a concentration of well-educated and relatively affluent residents. But many Minnesota high school students frequently leave the state for college and some never return. Meanwhile, the state’s reputation for frigid weather can discourage well-educated residents on the coasts or the southern United States from moving to Minnesota.

“Demographers like to say demographics can be destiny,” Anderson Kelliher says. “We don’t want that.”

As baby boomers age and retire, MHTA and other state leaders want to battle demographic trends and avoid a serious worker shortage in STEM occupations. To aid MHTA in its workforce development goal, DEED allocated $2 million over two years to help promote and nurture STEM talent through the internship subsidies. MHTA’s SciTechsperience program placed 223 interns this year and estimates it will place another 250 next year. Both metrics are up significantly from the project’s start in 2012, when the state provided $129,000 for 67 interns.

MHTA takes a fairly hands-off approach when it comes to placing interns; it primarily determines which students and employers qualify for the program. An intern needs to be a Minnesota resident (or living in the state while attending a Minnesota school) and be at least a college junior in a qualified STEM major with at least a 2.5 GPA. Companies, meanwhile, are eligible if they offer an internship with at least 400 hours of work in a high-tech field—and there can’t be any fetching of coffee. Metro-based companies need fewer than 150 employees globally; those in Greater Minnesota can have as many as 250.

After MHTA completes the qualifications vetting, companies do their own interviewing and make the best student matches, Anderson Kelliher says. This approach comes with at least one downside: The program is unable to target underrepresented communities in the STEM fields, such as women and people of color. In 2015, 23 percent of interns were women, while 26 percent were non-white.

Still, the program attracts a variety of students, if Mobile Composer is any indication. Its four recent interns are: Carlos Lopez, who is retooling his career in tech after being a carpenter, Kameren Lymon, a budding entrepreneur interested in startups, David Munkvold, a neuroscience major, and Kyle Blackburn.

Blackburn is a six-year veteran who enlisted in the Marines after his first college experience was too focused on fun rather than school. He left the service with great determination, but struggled to find a job that used the skills he had honed while in the military. After jumping around within several different professions, he found he liked designing websites and web applications, and decided to go back to school.

It was there that a teacher helped guide him to the SciTechsperience program and Mobile Composer. He and his three colleagues work as a group, and they rotate the project manager duties on a weekly basis. They have been tasked with developing the dashboard of Orchestrate’s content management system—a major task for a 10-week internship.

However, Lopez is extending his tenure with the company. He graduated from Minneapolis Community and Technical College with an associate degree in software development and was hired for a Mobile Composer job starting Aug. 29.

“Knowing that the product that I worked on through the summer is going to be used by every client around the world that Mobile Composer supports is a great feeling,” says Blackburn. He is remaining with Mobile Composer in a part-time job while he continues his studies at Anoka Technical College.

Lymon agrees and says the program has taught him the intricacies of running a nimble startup while boosting his technical abilities. “The biggest skill increase I have seen is with my programming and learning how to pick up new [computer] languages,” he says.

Helping students increase their skills and enhance their resumes is just one tool that MHTA is employing to boost Minnesota’s high-tech stature. But the organization also is working on a number of fronts, including using real-time data and outreach, to help employers track job postings and identify where job and skill shortages exist. It’s collaborating as well with K-12 and higher education institutions.

“We need to continue to do a better job of making sure that students in the state graduate high school and are aware of the job opportunities ahead of them,” Anderson Kelliher says, adding that it is critical that colleges and universities are up-to-date with the STEM skills needs of employers.

She says another major piece in the workforce development puzzle is the power of public relations and marketing. She emphasizes the importance of the work of Greater MSP, which is building the Twin Cities’ brand as a vibrant place to do cutting-edge work.

The overarching goal is retaining the high-tech talent that’s already in Minnesota while attracting more talent from elsewhere.

“We need people for specific fields,” she says, and that will require an inflow of workers into Minnesota. To achieve its STEM talent targets, Minnesota will need the talent of both newcomers and homegrown residents. “It’s not one group versus another,” Anderson Kelliher says.

Andre Eggert is the online and e-newsletter editor of Twin Cities Business.