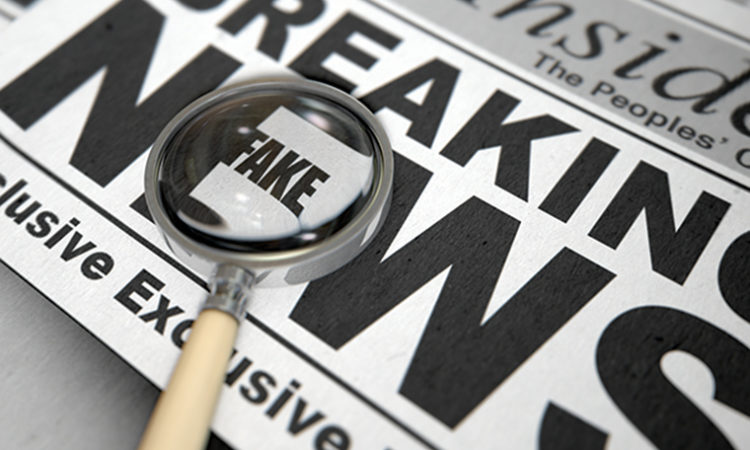 It starts by not supporting it, even if it is entertaining or ‘for good reason.’
By Dale Kurschner
February 28, 2018

The Rotary Club of Edina was kind enough to ask if I would come by and talk for a few minutes in February. Originally, I thought discussing business and economic trends, challenges and opportunities in Minnesota would be appropriate and I drafted a title, “The State We’re In.”

As I worked on “challenges,” I couldn’t help but realize the greatest one facing all of us—at work and at home—is how our democracy is being damaged by the onslaught of “fake news” coming from an unlimited number of sources and, sadly, our own president. It’s gotten so bad that in late January even the pope spoke out about it.

“We need to unmask what could be called the ‘snake tactics’ used by those who disguise themselves in order to strike at any time and place,” he said, calling for “education for truth” that would teach people how to discern, evaluate and understand information.

Pope Francis’ call for action here is important for every communications professional, and business leader, to heed. If we do not, fewer and fewer people will know whether they can trust what we’re saying.

People I’ve talked with have often said, “There’s so much noise and confusion, I just tune it out”—except for ideas, positions and concepts they already are familiar with and like. (This includes employees inundated with internal communications.) Or they say, “It’s all fake news, and if it isn’t, I can’t tell the difference.” Then they, too, fall into Skinner’s “learned helplessness.”

Fake news was flourishing before Donald Trump became president; we’re learning almost every day about how it may have helped him get elected. It’s now an epidemic, as he fuels its growth for further personal and professional gain.

Other presidents have been known to exaggerate truths and even lie at times. In December, The New York Times found that President Obama had lied at least 18 times over his eight years in office. President Trump, however, lied 103 times during his first 10 months. A recent example: his statement that “the highest number in history” watched his State of the Union address. Trump also consistently mounts disinformation campaigns, such as releasing a biased report about the FBI, which is missing key facts. His motive is to alter or stop a federal investigation looking into various activities during his campaign and into his presidency.

I bet a few of you right now are thinking I’m biased. Did I just bring up Trump the way I did because I’m a Democrat, or I just don’t like him? No. I’m independent and typically lean more Republican. But this brings me to my next point: the distrust of the media at a point in our history where we need a robust Fourth Estate more than ever.

The mistrust is in many ways deserved, I’m sad to say, based on my experience handling PR and crisis communications from within companies and from some of the projects we have done here at TCB.

When we reported four different factual examples of wealth leaving Minnesota, primarily due to its tax policies, our state’s largest newspaper ran a story stating “There’s no evidence that ultra-rich are fleeing Minnesota.” When we were the first to report Macy’s would soon announce the closure of its downtown Minneapolis store, that same newspaper reported “Macy’s in talks about downtown site; no decision on closing the iconic store.”

This newspaper usually provides excellent journalism, and I figured this was probably a case of misinformation—intentional spreading of false information by someone who believes it to be true. But then I realized neither of its reports included the information Twin Cities Business had first reported, and that it appeared our reports are what led to these new stories. Thus, this could be an example of disinformation—deliberately spreading false information by someone who knows it is false, including through omission of facts. I don’t know for sure. I do know balanced journalism usually mentions the information, and source, it tries to rebut.

Coming back to the pope’s point, here are a few things to look for when deciding whether content is real or fake:

On the flip side, if you’re concerned about how to establish a trustworthy reputation (and you should be—not because you aren’t trustworthy, but because of all the fake content out there), here’s how to be heard, seen, valued and trusted:

Many of you already know these guidelines. But you also may know someone who does not, and if that’s the case, please pass them along. I’d also appreciate knowing where you turn to for the news and information you trust, as well as any other thoughts you have on how we fight back against all of the fake news out there.