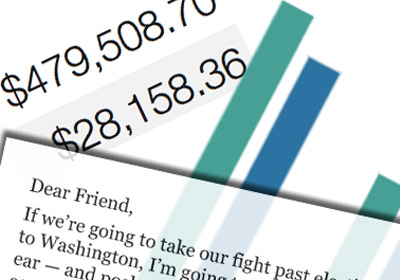 Few Surprises In Finance Reports By GOP Candidates For Governor

All but one of the GOP candidates made loans to their campaigns.
June 29, 2014

Some trends but few surprises in the new campaign finance reports filed by Minnesota’s candidates for governor. The reports cover campaign contributions, expenditures and cash balances for the first six months of the year.

Explore the latest fundraising numbers in the Minnesota races for Governor, Senator and U.S. Representative.


Orono businessman Scott Honour leads the field of four Republicans vying to be the GOP candidate with a cash balance of $226,733. His contributions are an equally impressive $573,329. But that sum includes $300,000 that Honour loaned his campaign this year on top of the $100,000 loan he made in 2013.

All but one of the GOP candidates made loans to their campaigns. Former state Representative Marty Seifert of Marshall reports a cash balance of $104,345.  His contributions totaled $143,717, which includes a $19,500 personal loan.

Only Hennepin County commissioner Jeff Johnson, the party’s endorsed candidate, did not have a personal loan on the books. He has the smallest amount of cash on hand—$32,529—and lowest in campaign contributions, $47,953.

But in a news release issued in advance of the filings, the Johnson campaign said that in the two weeks since the May 30 endorsing convention, the Johnson for Governor campaign raised more than $90,000 and “is on pace to meet its fundraising goals.”

Not surprisingly, no individual Republican candidate comes close to the campaign funds amassed by DFL Governor Mark Dayton. He reports a cash balance of $753,204 with contributions of  $355,112. The report also includes a loan of nearly $4 million that Dayton made to his campaign for governor in 2010.

The Dayton advantage may shrink after the August 12 GOP primary. Until then, the Republican field is sharing the contribution base. Contributions totaled among the four candidates exceed the Dayton contributions.