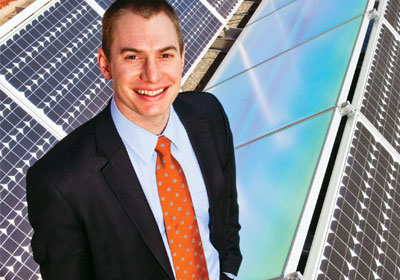 Fertilizer for the Green Economy

The Cleantech network plans to do for green business what the Twin Cities already do for med tech.
May 11, 2010

In all the talk of building a green business sector and getting environmentally conscious start-ups to put down roots in the Twin Cities, many local observers acknowledge that something is missing: an ecosystem.

They mean a supportive network of financing sources, lawyers, accountants, seasoned executives, and established green firms that can provide talent, ideas, dollars, and other resources to help start-ups grow. Early-stage medical technology firms, for example, can readily find that kind of network here.

Now a new organization, the recently formed North Central region of the nonprofit Cleantech, wants to bring the same advantages to Minnesota’s emerging green companies. The group’s primary tool will be the Cleantech Open, a business plan competition (see details below).

Cleantech began four years ago in Silicon Valley. Interested members of the Twin Cities business community met in January to organize their region, Cleantech’s fifth after others were formed in Seattle, Denver, and Boston. The Cleantech model is to “find, fund, and foster the most successful cleantech start-ups on the planet,” according to selectra.co.uk, the national Web site.

Justin Kaster, an investment banker by day for Cherry Tree Companies in Minnetonka, is spearheading the volunteer-led North Central region, which covers Minnesota and six nearby states.

“We want to connect [green] entrepreneurs with capital and other platforms for success,” Kaster says. He calls green businesses the “economic opportunity of our time.”

So how to build an ecosystem? “We get people involved in a couple of different ways,” Kaster says. For entrepreneurs, there’s the business plan competition, with regional winners going on to compete nationally. For service providers and others, there are volunteer opportunities to work with the start-up firms—as a Cleantech Open judge, a mentor to a competing company, or on committees that will recruit investors or develop partnerships with relevant organizations around the Upper Midwest. Cleantech North Central is inviting volunteers to send e-mails to nc_volunteers@cleantechopen.com.