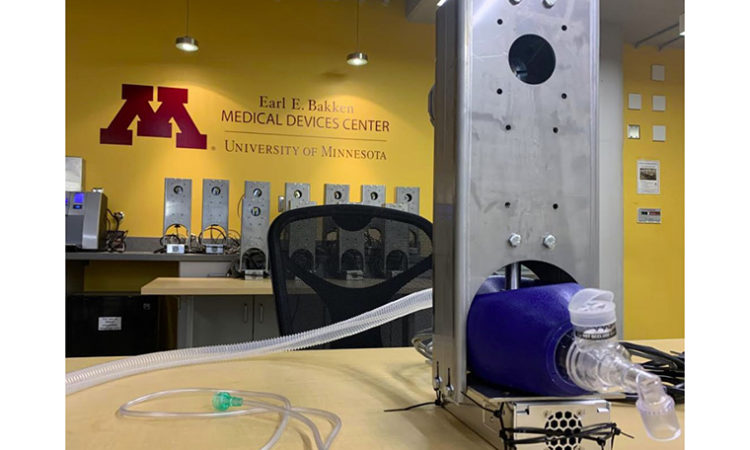 Photo courtesy of the University of Minnesota

FDA Green-lights Production of U of M’s Cheaper Ventilator

The new device could be 25 times less expensive to make than standard ventilators.
By Dan Niepow
April 16, 2020

The Food and Drug Administration on Wednesday approved production of a significantly lower-cost ventilator developed by University of Minnesota researchers.

Dubbed the “Coventor,” the new device is designed to serve as a backup option for physicians in the fight against Covid-19. The FDA’s approval allows the ventilator to be distributed to health care systems, U of M officials said in a news release.

The U of M’s ventilator, which is about the size of a cereal box, would cost roughly $1,000 to produce, or about 25 times less than the cost of a standard ventilator.

“This allows patients who wouldn’t otherwise have the opportunity to survive, to survive,” said Stephen Richardson, a U of M cardiac anesthesiology fellow who helped develop the Coventor. “The Coventor gives people a chance and that is what this is all about. Making the ventilator as fast as possible, pushing it to people everywhere.”

Last month, Richardson told the Star Tribune that he went “full-on MacGyver” to produce a prototype of the device for about $150. Richardson teamed up with inventor Aaron Tucker to create the device. The two used “an assortment of available machinery components” to develop the Coventor, according to the U.

Boston Scientific and Medtronic also provided input during the development of the new ventilator, U of M officials said. Now, researchers say they’ll make the design open source so other manufacturers can secure regulatory approval to begin production.