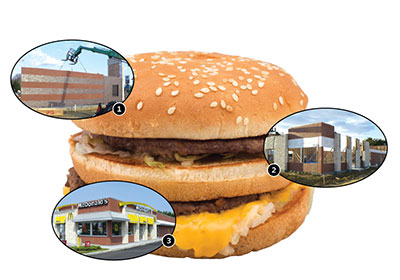 When you need to build a Taco Bell in half a week, call Fullerton Cos.
January 13, 2017

It’s no surprise to get a fast-food lunch in four minutes, but would you believe a local company builds a fast-food outlet in as many days? Fullerton Cos. CEO Dave Walock specializes in fast food fast. It’s the bread and butter (bun and burger?) of Fullerton’s popular “quick build” facilities business.

“Whether its McDonald’s, Red Robin, or Panera, I can tell them we’ll save two to three weeks,” Walock says of the timeframe it takes Fullerton to assemble a prefabricated building. “So we tell them what they can save time-wise, and they translate that to dollars.”

The idea is nothing new; Fullerton began assembling the shells of commercial buildings (minus interior finishes) in the 1980s. Prior to that, the Plymouth-based company had stuck to the residential market, piecing together the bones of homes mostly in rural areas. “We had gotten involved with a customer who had signed a multi-state agreement with Arby’s,” Walock says. “Long story short—and 500 Arby’s later—we found out this concept worked even better in those speed-to-market areas than it did for housing.”

Constructing an entire building in a matter of days does come at a premium, Walock notes, although customers tell him the quicker opening pays for itself. As demand for quick build continues to ramp up, Walock sees big sales gains ahead. “Our goal in the next three years is to double our revenue,” he says, “because, interestingly enough, there’s no other company in this market doing quite what we’re doing.” —Sam Schaust