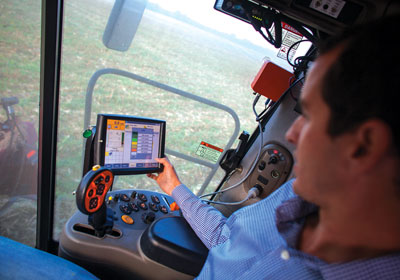 Farmobile has figured out a source of income for farmers that isn’t dependent on the weather.
June 06, 2016

Jason Tatge isn’t a farm kid. He grew up in Plymouth, but he’s spent much of this spring traveling around rural Minnesota to sign up farmers for his Farmobile Data Store program. At a time when crop prices are low, Tatge is offering at least $2 an acre to farmers willing to collect data on their planting choices, fertilizer applications and crop yields.

Tatge, CEO and co-founder of Kansas-based Farmobile, says fertilizer and seed companies and other for-profit businesses will pay for accurate and timely data about farm operations. Farmobile has developed technology to gather the data and store it. What’s novel about Farmobile’s approach is that the data remain “farmer-owned and controlled,” Tatge says. The Farmobile Data Store serves up options for the farmers to sell their information. When a transaction occurs, the farmer and Farmobile split the proceeds 50-50.

The Data Store is being developed this year in Minnesota, and Tatge hopes to list 250,000 acres of state farmland in the program. Participating farmers attach orange passive uplink connection (PUC) devices to their tractors and combines to collect data. It is translated into electronic field records.

Bob Swedberg, who farms about 2,000 acres outside of Owatonna, is among the farmers taking part in the Farmobile launch phase. “There are a lot of people who want to know what I planted and where I planted it,” Swedberg says. “It would be nice to be compensated for that.” Swedberg is a corn and soybean farmer who agreed to be an early adopter to the Farmobile program because he was familiar with a previous Tatge enterprise.

From 2002 to 2013, Tatge was CEO of Farms Technology LLC, which developed a dynamic pricing platform that allowed farmers and grain buyers to trade grain online. The company was sold to DuPont Pioneer.

Tatge, who graduated from Gustavus Adolphus with a degree in financial economics and started his career as a grain trader for Pillsbury, has raised $5.5 million in venture capital for Farmobile. He now has more than 1,000 PUC devices in the field. Building sound relationships with farmers is crucial. “These guys appreciate the fact that we are trying to create a revenue stream for them,” Tatge says. “Everybody wants to sell the farmer something, but the farmer has always owned the risk.” —Liz Fedor