A dozen Sun Country employees were allegedly not drug tested after being hired or transferred, per the requirements of the Federal Aviation Administration.
October 08, 2015 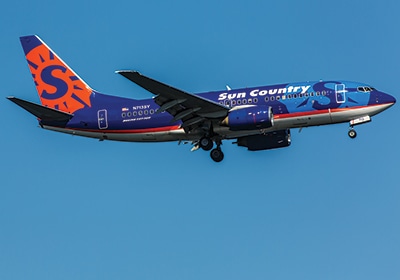 Sun Country Airlines may be facing a $114,975 civil penalty charge after the Federal Aviation Administration (FAA) alleged on Monday that the Mendota Heights-based carrier had violated federal drug and alcohol testing regulations on several occasions.

According to a release, the FAA said that Sun Country did not conduct pre-employment drug tests and, as a result result, couldn’t verify negative results before hiring or transferring three flight attendants and a mechanic into safety-sensitive positions.

The FAA requires employers to administer a new drug test if the previous one on file for a transferring employee is more than 180 days have passed. The FAA alleged that Sun Country broke this requirement after transferring at least one flight attendant into a safety-sensitive position where she performed in-flight duties on four occasions before being re-tested.

Additionally, Sun Country is also being charged with failing to include one pilot and seven aviation screeners in its random drug and alcohol testing pool. It is alleged that the pilot flew for seven months without being considered for random testing, while the screeners performed duties on one occasion without being part of the pool.

The FAA said it discovered the proposed discrepancies during “an inspection of the airline’s Antidrug and Alcohol Misuse Prevention Program.”

Sun Country has been sent an enforcement letter from the FAA and will have 30 days to respond.