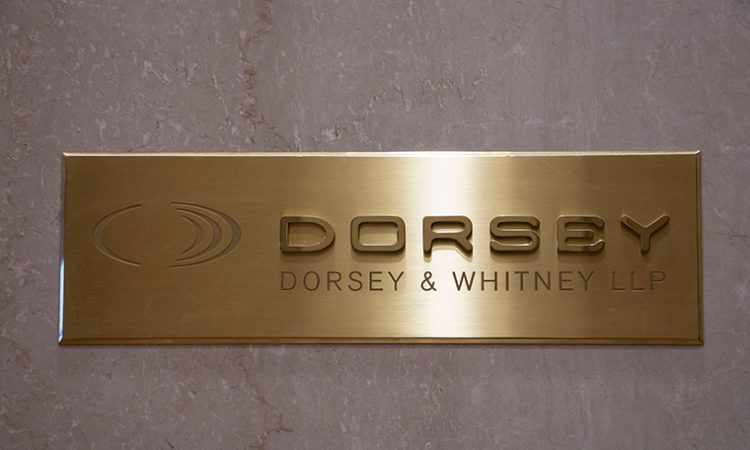 The acquisition is aimed at boosting the law firm’s capabilities in issues related to immigration and visas.
By Dan Niepow
August 09, 2019

Dorsey, which counts more than 500 lawyers at its offices around the world, is gaining 10 legal professionals from the transaction.

Dorsey officials say the acquisition will enable the firm to better handle cases related to immigrant workers in the U.S.

The genesis of the deal dates back to January, when Webber owner Bob Webber started thinking of ways to better serve clients on immigration issues. At the time, he reached out to Brian McMahon of headhunter firm Major, Lindsey & Africa – a buddy from law school – to explore options.

Webber says McMahon performed an analysis on the legal market and came back with suggestions on some local firms to join. Webber had actually entered serious talks with Dorsey and another firm, but Dorsey moved more quickly, Webber says.

For their part, Dorsey’s leaders also had been mulling ways to boost capacity on immigration-related cases.

Officials from both law firms say the acquisition will help them serve clients on issues related to visa issues in particular. More and more immigrants working in in-demand fields like health care and technology are encountering a slate of new visa issues, Webber says. That’s created a demand among international companies for lawyers specializing in immigration.

Over the last decade, Dorsey leaders say they’ve seen a considerable increase in the number of immigration-related questions.

In an Aug. 8 news release, Dorsey officials say the acquisition will enable the firm to “lobby for highly targeted immigration reform.”

As divided as the nation is on immigration issues, Webber notes there are some “micro-issues” that may achieve bipartisan support. For instance, lawmakers on both sides of the aisle may find agreement on rural health care issues. Some rural areas are experiencing a shortage of doctors, and skilled workers from overseas could help fill those roles, Webber says.

Then there’s the issue of immigrant-founded startups. The state of Massachusetts has rolled out a program that enables foreign college students to remain in the country to build out their new companies. (Webber says that could be of interest locally. It’s worth noting that Greater MSP has said that Minneapolis lags behind peer regions when it comes to startup activity.)

Webber believes there are plenty of similar “creative” ways to tackle immigration issues.

As part of the acquisition, Dorsey assumed Webber’s lease in Edina. In turn, Webber’s employees will move to Dorsey’s downtown Minneapolis office. Bob Webber has also been named a partner in Dorsey.

Through the years, Dorsey has been the starting ground for a number of major political figures, including U.S. Sen. Amy Klobuchar and former U.S. Vice President Walter Mondale. U.S. Supreme Court Justice Harry Blackmun – noted for authoring the court’s ruling in Roe v. Wade – had also worked at Dorsey.