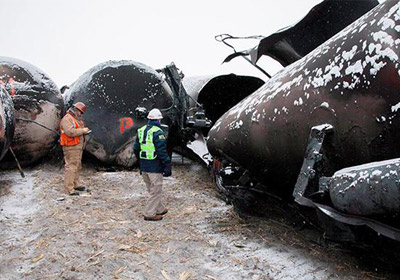 “I think my eyes were opened up a little bit,” Casselton Mayor Ed McConnell told Forum News Service two days after the accident just outside his community of 2,400 people about 20 miles west of Fargo.

As several oil tankers ruptured and caught fire shortly after 2 p.m., thunderous explosions sent huge fireballs into the sky, and worries about toxicity of billowing clouds of oily smoke caused evacuation of much of the town.

Officials reported no injuries, and residents were given an all-clear to start the new year back in their homes. But if the derailment and explosions had happened in town, “we would have easily lost 100 people,” the mayor said.

Citing the Casselton accident and others, the federal Pipeline and Hazardous Materials Safety Administration issued a safety alert Thursday, warning that Bakken crude may be more flammable than other, heavier crude oil.

Also on the mayor's mind—on the minds of many—was the tragic accident last summer in Quebec, when several parked and unattended tanker cars loaded with Bakken crude oil rolled into Lac-Megantic, a town of about 6,000 people, killing 47.

As the public debate increases, the nature of Bakken crude and the capacity of the nation's oil rail fleet to carry it  safely have taken center stage.

“Who’s to blame, and what can we do about it? Those are the two questions that must be answered right now,”  wrote Jim Fuglie, a frequent critic of the rapid development of an oil industry that has vaulted North Dakota into second place, behind only Texas, in the domestic production of oil.

The Bakken is producing so much oil, the Federal Reserve Bank of Minneapolis noted on its Web page last April, “that it’s turning competitors—railroads and pipelines—into partners in the vast enterprise of transporting that  energy.”

A new rail hub at Berthold, N.D., which links to BNSF’s nationwide rail network, is owned by Enbridge, a Canadian company and one of the biggest pipeline operations in North America.

“Enbridge built the rail facility last year to help ease a bottleneck on its large, nearby pipeline that carries oil  eastward through North Dakota into Minnesota,” the fed noted. “The roughly 70,000 barrels of oil loaded on each unit train bypass the pipeline, headed to oil terminals and refineries all over the country.”

Taking advantage of hydraulic fracturing and other new  technologies, the industry has given the state a huge  budget surplus, the lowest unemployment rate in the nation and the highest population growth rate.

“The (recent) railroad explosions were all the result of derailments of trains carrying crude oil,” Fuglie wrote this week. “One of the biggest problems is that many of the cars used to  transport the oil . . . are not designed to carry flammable Bakken crude oil. They are not safe. Critics point out that old tank cars can puncture easily, and that trains carrying  heavy oil loads can wear down railroad tracks.”

Investigators with the National Transportation Safety Board continue to examine the site and wreckage, trying  to determine what caused the eastbound Burlington Northern Santa Fe train loaded with crude oil to strike a car hauling soybeans that had derailed from a westbound BNSF freight train running on parallel tracks.

In an interview Thursday, Fuglie said the Casselton accident reflects “the continuing gold rush” that is the  Bakken boom, with state and industry leaders acting as cheerleaders.

“North Dakota elected officials and regulators have been so giddy about this newfound wealth they just pass on  everything the industry wants,” he said.

The oil must be moved, he said, and existing pipeline capacity is far below what's necessary. Maybe, he said, the answer “is to undertake a 'war effort' like we did at the beginning of World War II, this time to build safe oil tank cars. Money shouldn't be a problem. The oil companies are making billions, they'd just have to re- invest some of it in the short term to make a bundle in the  long term.”

“It's time, probably past time, for officials and industry to act,” the newspaper warned.

“Any actions risk slowing down some of the economic activity that the Bakken boom has brought to North Dakota. But failing to act has risks as well. . . .  North Dakota almost lost much of Casselton on Monday.”

Through Minnesota and beyond

Those long unit trains roll through towns in Minnesota, as well, and beyond, carrying Bakken crude to pipeline heads, refineries and coastal shipping points. It is unclear how many trains carrying crude oil may pass through Minnesota from Canada or North Dakota at any given time, but the traffic clearly has grown in recent years.

Noting that industry officials estimate the number of carloads of oil shipped by rail will top 400,000 this year, compared to just 11,000 in 2009, the West Central Tribune in Willmar, Minn., urged caution in a New Year's Eve editorial: “Each accident raises concerns among the communities all along the railroad lines carrying the crude oil. All should be reviewing and preparing appropriate emergency plans to address the growing concern.”

The Minnesota Department of Public Safety brought in trainers from Texas A & M University earlier this year to help firefighters and other responders deal with oil car fires, KARE-TV reported this week. The training included detail on how shale oil from Canada may burn differently from Bakken crude.

National Geographic reported recently that U.S. railroads “have seen the number of cars filled with petroleum  products jump 44 percent in the past year,” and much of that traffic begins in North Dakota's Bakken, “where more oil is being transported by rail than by pipeline.”

While shipping by rail costs more than transporting oil by pipeline “and raises new environmental concerns,” rail traffic “may become a fixture of the industry and not just a temporary fix, analysts say.”

The Herald's editorial board, blogger Fuglie and others cite reporting done in recent months by the Toronto Globe and Mail, which  conducted a major investigation of the oil transportation industry following the Quebec disaster. The newspaper's five-part series has been widely circulated in North Dakota and the region via the Internet since Monday.

Despite boom, no oversight change

Due to the rapid development of the Bakken, which extends into Montana and Canada, and a shortage of pipeline capacity, “a new kind of railway industry traversing the continent” has grown to move the oil,” the Toronto paper reported. But “despite this extraordinary boom in oil shipments, there was no change in regulatory oversight, or added safety measures, governing these veritable pipelines on wheels passing through hundreds of small towns across the country,” the Toronto paper reported.

Pipelines can rupture, leak and burn, too, of course. Cleanup continues at the site of an 865,000-gallon leak in a Tesoro pipeline near the western North Dakota town of Tioga earlier this year, and there have been pipeline leaks  in Minnesota and elsewhere.

But the public's primary concern now, following the Casselton and Quebec accidents and another earlier this year that polluted an Alabama wetland, is with rail shipments, and specifically the ability of the oil tanker fleet  to carry Bakken crude.

In September, responding to the Quebec disaster, Midwest Energy News said the Federal Railroad Administration had “warned the oil industry three weeks after the derailment that it had concerns about widespread misclassification of crude on the tracks as well as the potential for chemicals used in hydraulic fracturing to corrode rail cars used for shipping oil.”

By ramping up investigations of crude shipments, the agency “is setting the stage for an oil-versus-rail battle  over which sector bears primary responsibility for preventing future accidents.”

Midwest Energy News quoted a blog post by Cynthia Quarterman, head of the Pipeline and Hazardous Materials Safety Administration, in which she said her agency was “laser focused on the energy boom epicenter” of the Bakken. The push to upgrade inspections is being called “the Bakken Blitz.”

“Today, our railways move more hazardous materials than ever before,” Quarterman wrote on the Transportation  Department’s website. “DOT will continue to enforce safety regulations—and revise them if necessary—to protect our communities and the environment.”

Similar reassurances have come from state officials, including Gov. Jack Dalrymple, who visited Casselton—his  hometown—the day after the derailment and fire there.

Dalrymple said the spectacular accident—the towering fireball was shown on network TV newscasts Monday evening—may raise the anxiety level of North Dakotans who see the seemingly endless oil trains snaking through their communities. But Monday's accident, he stressed to reporters, was a “bad  coincidence.”

John Harju, director of the Energy and Environmental Research Center at the University of North Dakota in Grand Forks, told Midwest Energy News in September that while Bakken crude “is more volatile than heavy crude,” he would be no more concerned about a rail tanker full of Bakken oil than one containing gasoline.

“Looking at Bakken crude as somehow the cause or some extremely different factor in severity of this fire (in Quebec) and so on, I think, is silly,” Harju told the energy site. “It was a tragic accident that points more at rail  handling than at the contents of the cars. If it was gasoline, they wouldn’t be asking, ‘Was this a special type  of gasoline?’ ”

Harju was on vacation this week and unavailable to comment on the Casselton incident.