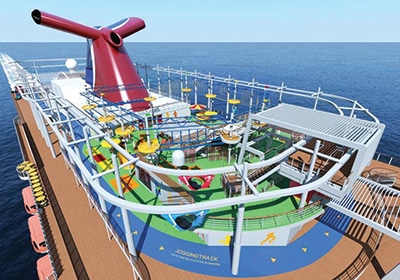 Exercise With A Roller Coaster Thrill

The inventor of Rollerblade introduces a new way to get moving.
June 08, 2015

“The idea was to merge fitness into an amusement ride,” Rollerblade creator Scott Olson says of his latest invention, the SkyRide. We want your workout to be exciting.”

Inspired by the operations of a roller coaster, the SkyRide runs on a looping track with an underhanging cab. From within the SkyRide, the user pedals the machine forward, enjoying both rigorous exercise as well as sweeping views from its elevated height.

Other models incorporate a rowing motion to power the cab, although it is the bicycle clone that Carnival Cruise Lines is installing in what they posit to be their “most innovative ship ever,” the Carnival Vista.

Olson estimates his smaller, suburban park-applicable models will cost roughly $100,000, although his contract with Carnival flies a little closer to $2 million. The determining factor is the track—the Carnival Vista’s will stretch 800 feet and be situated 150 feet above the sea. “They’ve got people buying tickets for [the debut] cruise just so they can ride this thing.”

Olson’s innovation has been five years in the making, a nerve-racking half-decade seeking “one big buyer,” he says, to bring an acceptable ROI. “It’s kind of like hockey,” says Olsen, who crafted goalie headgear in his early days. “You get that first one, you’ll get three or four more.”

Since the Carnival contract, Olson has also entered into a roughly $1 million agreement for an installation at downtown St. Paul’s CHS Field, the Saints new ballpark. International buyers are also hopping aboard. Interest from China and Mexico has emerged, and Olson has a licensing and distribution agreement with Meglio Unionland of South Korea.

“People thought the Rollerblade was an overnight success,” Olson says, with irony. “Let’s just hope the entrepreneurial gods will stay on our side.”