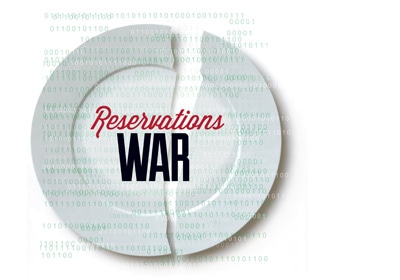 Local upstart Eveve is taking a bite out of OpenTable’s hide—because it saves restaurants money.
By Adam Platt
May 01, 2012

A year after Eveve Software decided to make the Twin Cities its first American beachhead, a full-fledged war has broken out over how restaurants take reservations.

Over the last decade, San Francisco-based OpenTable Inc. has grown to dominate the restaurant reservations business, its ubiquitous computer terminals perched at host stands in thousands of American restaurants.

We have grown accustomed to making reservations online, day or night, using OpenTable’s customizable Web interface to find restaurants at a certain time or in a certain neighborhood, on long or short notice. Business travelers rely on OpenTable’s ratings and geographic groupings to make finding a meal easier on the road.

But that convenience comes at a cost to restaurants. Mark Pastore, of San Francisco’s lauded Incanto restaurant, publicly accused OpenTable of a fee structure that sucked most of the profitability out of small restaurants. He called on the marketplace to create competition that would alter OpenTable’s defacto monopoly. (OpenTable has always had competitors, but restaurateurs say few have been able to offer a product that duplicates OpenTable’s suite of restaurant operations and marketing software.)

“We saw the Twin Cities as representative of a typical U.S. city,” says Ryan. “If we could prove it here, it might work anywhere.” Ryan also says he believes the Twin Cities were at or near the top of OpenTable cities in revenue per restaurant, meaning the savings Eveve could offer would be compelling.

The Cost of Reservations

Eveve (pronounced eh-VEEV) targeted OpenTable’s highest-volume restaurants in the Twin Cities, Hell’s Kitchen and Bar La Grassa, both in Minneapolis. They are restaurants with little in common, except that they were paying OpenTable several thousand dollars each month and are now paying Eveve a flat $200. (Eveve’s flat-fee structure is based on the size of a restaurant, and currently runs from $200 to $500 a month, says Ryan.)

La Grassa, which serves dinner only and fills eight weeks out on weekends, was booking more than half its diners with OpenTable. “We had a fair number of regulars booking through OpenTable,” says partner Nancy St. Pierre.

“OpenTable consistently had us and Bar La Grassa as the most booked restaurants in the Twin Cities,” says Hell’s Kitchen co-owner Cynthia Gerdes. “And we were keeping half our tables open for walk-ins.”

What Eveve and OpenTable offer restaurants is similar, say restaurateurs, but what they offer the consumer is radically different. Eveve exists to serve restaurants. It offers a reservations widget on a restaurant’s website. There is no way to see another restaurant’s availability. This opacity is a selling point, as Eveve never steers a diner to a competitor.

“[OpenTable’s] theory is that every diner is exogenous,” Eveve’s Ryan explains. “And they wouldn’t dine with you without [OpenTable]. In fact, OpenTable was probably cannibalizing Bar La Grassa’s customers, redistributing them to other restaurants,” when they saw no tables available.

But the motivation for most OpenTable defectors has been cost, pure and simple. OpenTable’s fee structure bills restaurants for its service (a function of how many computers a restaurant has operating the OpenTable system) and for diner reservations. It also bills a restaurant for every diner seated via a reservation. The fees are a function of how a diner books. Bookings that come through a restaurant’s website into the OpenTable system are charged at 25 cents per head. Bookings that come through the OpenTable.com site price at $1 a head. (OpenTable’s frequent-diner program offers points only to diners who book through Opentable.com, which is in essence funded by the $1 reservations.)

The lower a restaurant’s price point, the more OpenTable cuts into profitability. “If your guest check average is $12, and you take $1 off the top, there’s not much left in an industry that averages a 4 percent profit margin,” explains Stephanie Shimp, co-owner of the Blue Plate Restaurant Company (The Lowry and the Highland Grill, among others), which switched from OpenTable to Eveve at its Scusi restaurant in St. Paul.

OpenTable says the average diner who uses the service spends $42.50 on a meal. Its data indicate that most restaurants need add only 5 percent to revenue to cover all costs related to OpenTable. But most restaurants that have left OpenTable that TCB spoke with (Bar La Grassa, Hell’s Kitchen, Barrio Restaurant Group, Blue Plate Restaurant Company, W.A. Frost & Company) say they are skeptical that OpenTable brought them incremental business after seeing no decline in customer counts after leaving.

“That’s the question,” says Bob Crew, general manager of W.A. Frost. “Are you going to lose business if you’re off their network, or were they actually steering customers away?”

The calculus for restaurateurs is certainly murky: what percentage of $1 reservations that come through the OpenTable site would have gone to a competitor had the restaurant not been an OpenTable client? Eveve’s Ryan says restaurants best suited to OpenTable’s network are ones that derive a lot of reservations from last-minute bookers searching by time or location. Restaurants such as Bar La Grassa and Scusi, which book up in advance and don’t always have same-evening availability, were paying OpenTable for customers who were coming to eat there anyway, he thinks.

“[OpenTable] tells you they’re filling your 5 p.m. and 8:30 p.m. tables,” says Scusi’s Shimp, “but you have to look at your data. If the names on it are regulars,” then OpenTable’s assertion doesn’t stand up, she says.

Hell’s Kitchen, though, fits Ryan’s definition of a restaurant that should benefit from OpenTable. “I planned for a loss of 50 percent of my online reservation business. We could sustain that and still break even on the switch [to Eveve],” says Gerdes. “If anything, our business has only been up. I’m really incredulous over it.”

OpenTable has made concessions to maintain its customer base. The proprietors of Atlas Grill in downtown Minneapolis left OpenTable’s web interface in January, allowing bookings only through atlasgrill.com. Ultimately, they returned after seeing a significant drop in reservations, but a smaller drop in customer counts. “As Valentine’s Day approached, we felt we had to be back on Opentable.com,” says manager Ken Cole.

A handful of restaurants that migrated to Eveve have ultimately returned to OpenTable; of those, most spent just weeks with Eveve and encountered integration or training issues. W.A. Frost went back to OpenTable after several months, but not because it was losing business. “The software was glitchy; it was not designed for American restaurants,” says Crew. “It needed more customization for a high-volume restaurant like ours, and they were open to it, but we found they could not move quickly enough and just did not have enough people to support us.”

Crew says when Frost returned to OpenTable it did so at a rate structure more favorable than when it left, but still more expensive than Eveve.

Parasole was a big fish Eveve wanted. Ryan says the company told him it was spending as much as a quarter of a million dollars a year with OpenTable, spread out over its 12 restaurants. Kip Clayton, Parasole vice president of marketing, says he was intrigued by Eveve, but felt the risks of leaving OpenTable were too great. “If 10 percent of your customers go bye-bye, you’re screwed,” he quips. “OpenTable is a loyalty program to begin with. Business travelers are focused on booking through it, whether your restaurant is there or not.”

Clayton says 25 to 30 percent of Parasole diners make reservations, and the company is trying to steer more of them to the Parasole website to book at OpenTable’s 25-cent rate. As for the $1-per-head bookings, “they are truly opaque. You don’t really know how you get them or if you would have gotten them without the OpenTable website.” Parasole’s hotel-based Manny’s Steakhouse, with a per-diner dinner check average of $90, has no trouble disgorging $1 to OpenTable for each customer. Parasole’s Good Earth, averaging $12 per diner, probably doesn’t break even on OpenTable bookings, but they represent only 5 percent of the restaurant’s overall customers.

“No head of IT ever got fired for going to IBM,” Clayton says, of the decision to stay with OpenTable. He believes the competitive pressure OpenTable faces locally has changed its sensitivity to pricing concerns. “If you’re in a monopolistic situation, you will see monopolistic pricing and profits,” he says. “But nobody wants to seat diners at $1 a head, and OpenTable has worked very closely with us to save us money. They know if it isn’t Eveve that displaces them, it will be someone else.”

OpenTable aggressively tried to hold onto its other restaurants as well. Hell’s Kitchen, Bar La Grassa, and Blue Plate say OpenTable offered them a modified pricing structure and perks like free iPads, in exchange for staying with the service. The pricing was contingent on the restaurants keeping the details confidential.

“It kind of bothered us,” says Scusi’s Shimp. “I mean, why didn’t they offer it to us from the beginning?”

OpenTable defends its position and pricing as justified by new diners the service reels in from its website and frequent guest program. It believes no competitor has duplicated OpenTable’s database and operational functions, says OpenTable’s Senior Vice President of Marketing Ann Shepherd, a statement echoed by W.A. Frost’s Bob Crew. (It’s worth noting that OpenTable’s technology allows guests to cancel and modify reservations, while Eveve’s does not.)

“It’s not fair to talk about cost without discussing value,” Shepherd says. She believes Bar La Grassa’s experience is atypical, and says research shows most $1-a-head diners had not chosen a restaurant when they arrived at OpenTable’s website. She says Eveve has prompted no fundamental change in OpenTable’s strategy or pricing structure, and the company notes Eveve is far from its biggest competitor.

After using the Twin Cities as its springboard, Eveve has been receiving inquiries and opening markets in other states. Ryan says Eveve will likely keep its support and administrative functions in the Twin Cities for the long haul. While it has not dislodged OpenTable from its dominant position, it has taken some of its most profitable accounts and believes it is handling 39 percent of all the online reservations in the Twin Cities, representing 45,000 diners per month. It would seem to have the potential to be a thorn in OpenTable’s bottom-line across the rest of the country as well.