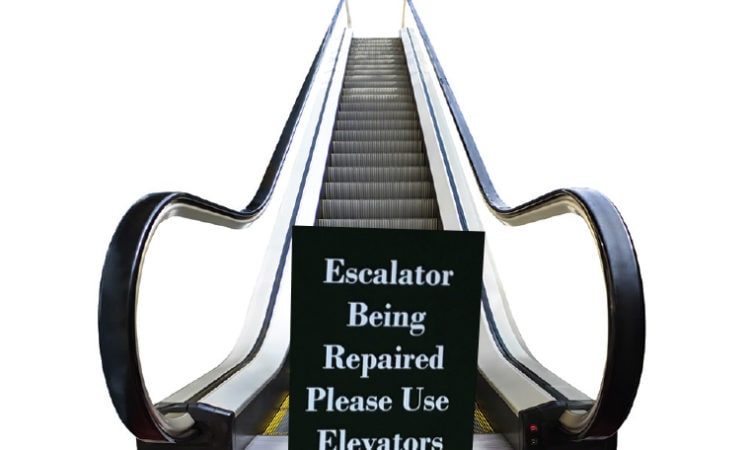 What's behind the preponderance of broken escalators in downtown Minneapolis?
By Burl Gilyard
June 07, 2019

Earlier this winter, it seemed like there were more escalators out of service in Minneapolis than there were working ones. That’s an exaggeration, but when elevators fail, they are out of service for hours. When escalators fail, the outages last weeks, forcing large numbers of people into interminable waits for limited elevator capacity or sending them on long detours.

Mayo Clinic Square, Gaviidae Center, and U.S. Bank Plaza all suffered notable outages; the downtime at Mayo and Gaviidae approached or exceeded a month. Property managers for those buildings either declined comment or could not be reached.

“The problem building owners have is the inconvenience of maintenance,” says Phil Cleminson, regional project manager for Lakeville–based Elevator Consulting Services. “You’re down for usually a couple of weeks minimum” when major components are required.

Finding parts is often a challenge. In some cases, manufacturers no longer make them. Finding components on the aftermarket is often time-consuming.

For older escalators, the downtime for major components can be excessive, Cleminson says. “They’re very expensive for maintenance and repairs.”

The overall cost of maintaining the powered stairs is the biggest issue. Cleminson adds that escalators have the highest liability insurance costs of any form of “vertical transportation”—elevators, lifts, grocery cart conveyors, etc.

“They require a lot more maintenance, even new,” says Bill Reinke, supervisor of elevator inspections for the Minnesota Department of Labor and Industry. “It’s a piece of equipment that’s constantly moving.”

Escalators may be a more common feature in downtown Minneapolis than other cities due to the need to connect the ground level to the skyways.

The answer for some landlords is to get rid of them.

The owners of 510 Marquette, 811 LaSalle, and the former TCF Tower all recently replaced escalators with stairs. In downtown St. Paul, the escalators no longer work at Metro Square, an office building owned by Ramsey County. The county is studying replacing them with central stairwells, but has yet not found funding.

“The building is a converted Emporium department store with four central escalators that have all become inoperable over the course of the past few years. We have found that there are no longer replacement parts available,” says John Siqveland, a spokesman for Ramsey County. “Access has been blocked off, with physical barriers on all floors.” —Burl Gilyard