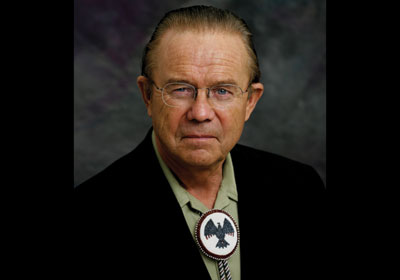 As a 10-year-old growing up among the Ojibwe on the Red Lake reservation in northern Minnesota, Andy Wells scoured junkyards and neighbors’ trash heaps looking for anything he could use to build a motor scooter, go-cart, or ham radio. By 13 he was building metal rockets that had a launch capacity of a mile. Today, at 70, Wells holds seven patents and runs a technology manufacturing company in Bemidji that employs 40, about one-fifth of them American Indians.

Wells Technology makes custom fasteners and parts used in a wide range of industries, including aerospace, defense, medical, electronics, automotive, and food. “It would be easier for me to run my business from Minneapolis,” says Wells. “But I love the Indian people.”

Wells’ mother raised chickens on the family’s dairy farm, saving up to send him to college, but he was hesitant. “No one from the family or neighborhood went to school. It was assumed we would stay and take over the farm duties and cut wood,” he says. Despite those doubts, he enrolled at what is now Bemidji State University and worked in the college’s machine shop. After two years, he ran out of money and dropped out to take a job at Polaris in Roseau. There his talent for tinkering soon got attention: He invented the first front-engine snowmobile with a fiberglass hood, which reduced both weight and drag.

Allan Hetteen, president of Polaris at the time, persuaded Wells to return to Bemidji State, where he eventually earned a master’s in industrial technology and physics. That led to a 20-year teaching career. But “I always loved manufacturing,” says Wells. “I was teaching others how to do it, but I was missing the opportunity to live it myself.”

In 1989, at age 45, married with four children at home, he took the leap. With $1,300 he bought a used lathe, and started cold-calling companies, looking to solve manufacturers’ problems by making custom parts for them. He convinced Control Data’s Bemidji division to give him a desk and a phone in return for an entire year’s worth of free consulting; eventually the computer giant and NASA became major clients.

Then as now, Indian business owners were rare. As recently as 2007, American Indian and Alaskan Natives made up 0.9 percent of business owners in the United States, and 0.6 percent in Minnesota, according to the most recent U.S. Census data. As a “small disadvantaged business,” a designation of the U.S. Small Business Administration, Wells bid on government contracts. He also got help from the Metropolitan Economic Development Association (MEDA), which provides support to minority-owned businesses.

Wells Technology grew to 14 employees, but by 2004 it had hit a plateau (Wells would not disclose specific revenue numbers). A breakthrough came when Winona-based Fastenal, also a maker of fasteners and a Wells customer, became a mentor through an SBA program. “Fastenal taught me how to do professional marketing and reach the entire nation,” says Wells. Since then, the company has grown to 40 employees and has doubled annual revenue.

Indian culture encourages people to live by the seasons, not by the clock, says Wells. “There is a certain element of losing your Native American spirit when you enter the industrial world,” he notes.He is proving it’s possible to succeed with a foot in both worlds. In recent years, he’s won a slew of honors, including MEDA’s Entrepreneur of the Year (2007), American Indian Business of the Year (2008), and Minnesota’s Small Business Person of the Year (2009).

As a kid, Wells would hike into the swamp near his home to trap mink, weasel or fox to sell for spending money. The first time he headed into the swamp alone, he worried about finding his way home, especially if snow covered his tracks. His father taught him to pay attention to signs in nature, which would lead him home. “I learned to depend on myself,” Wells says.

Now he is passing on such lessons. “Andy’s primary task is growing a company and guiding his company, but he is also a developer of people,” says Woody Clark, who worked with Wells in Fastenal’s mentoring program and later at Wells Technology. “Andy is as much a dad to some of his employees as he is their employer.”

Wells is slowly transferring ownership of his company to his children, three of whom are involved in the business, and while he plans to relinquish more responsibility over the next few years, he has no plans to leave Bemidji.