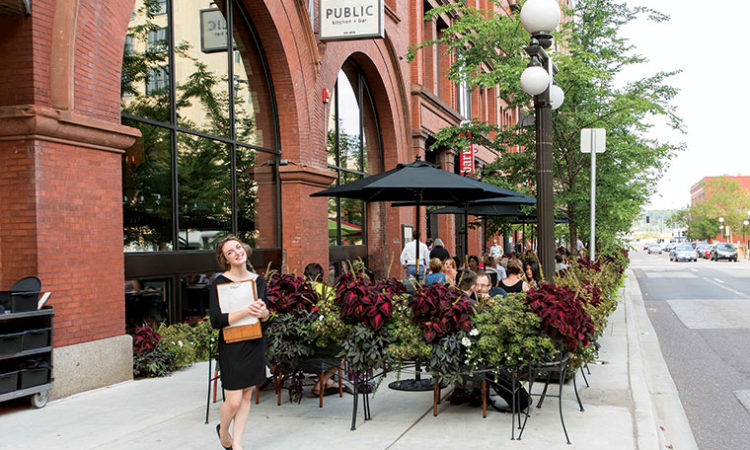 Reasons to leave the office early and enjoy happy hour outside.
By tcbmagstaff
May 01, 2017

On a gentle May evening, the patio at Public Kitchen & Bar (publickitchenstpaul.com) in Lowertown is a lovely place to while away a few hours. Situated in an 1880s building designed by noted St. Paul architect J. Walter Stevens, the restaurant overlooks pocket-sized Mears Park. Order a couple of pints of Tin Whiskers, brewed in downtown St. Paul, chips with beer cheese dip, and walleye sliders. Regale your clients with stories of Prohibition-era St. Paul, a haven for gangsters and other charming malcontents. According to local lore, a handshake agreement enabled John Dillinger, Babyface Nelson, Machine Gun Kelly and other nefarious characters to live in St. Paul, as long as they agreed not to rob banks, hold up trains and mail trucks, or kidnap people within the city.

When the iconic clock on Marquette Avenue strikes 5, head over to Mercury Dining Room and Rail (mercurympls.com) in the historic Soo Line Building, the city’s tallest commercial building from 1915 until 1929, when Wilbur Foshay’s tower stole the honors. Score a table outside and order a round of Mary Tyler cocktails and the 1970s-style onion dip with house-made potato chips. As you wait for your hors d’oeuvres, toast to the memory of Mary Richards, Minneapolis’s original media darling, and Gwendolyn Gillen, Wisconsin sculptor of the bronze Mary Tyler Moore statue, who also died last January, two days after Moore passed away.

If Cuba is on your clients’ bucket list, invite them to happy hour at Victor’s 1959 (victors1959cafe.com) in South Minneapolis. Stroll through the colorful cafÃ©, once a 1920s Shell gas station, and take a table on the patio. Relax under a colorful umbrella surrounded by vivid tropical flowers and climbing vines, and peruse the short but well-crafted drinks list. Say sÃ to a bottle of chilled Chilean rosÃ© and order the ceviche Cubano with avocado, pineapple and mango, albondigas Cubanas (savory meatballs baked in Cuban ketchup), and crab cakes with cucumber-mango relish, followed by coconut flan and strong Cuban coffee.

If your out-of-town clients are sports fans, take them to McKinney Roe (mckinneyroe.com) in the newly minted neighborhood around U.S. Bank Stadium. Grab a table on the restaurant’s gargantuan patio and enjoy VIP views of the equally colossal edifice, designed to hold 73,000 Super Bowl LII fans. Order pints of locally brewed Summit ale on tap, pork belly sliders and the East Town wings in a trio of flavors. As you admire the stadium, recall how its striking, Viking ship-like design helped created competitive advantage for Minneapolis, enabling the city to beat out New Orleans and Indianapolis for the big game.

Out at Lord Fletcher’s (lordfletchers.com) in Spring Park, the Lake Minnetonka patio season’s been in full swing since March, when ice-out was officially declared—among the earliest on record, but not quite as record-breaking as March 11, 1878. Swap your wingtips for Topsiders sans socks and take a table on the patio of all patios, a vast wharf on an inlet on West Arm Lake, one of Minnetonka’s many bays. Order a round of signature bootlegs with gin and fresh mint, Buffalo shrimp and calamari fries, and enjoy live music and Baywatch-worthy views of power boats and the beautiful people who trail in their wake.