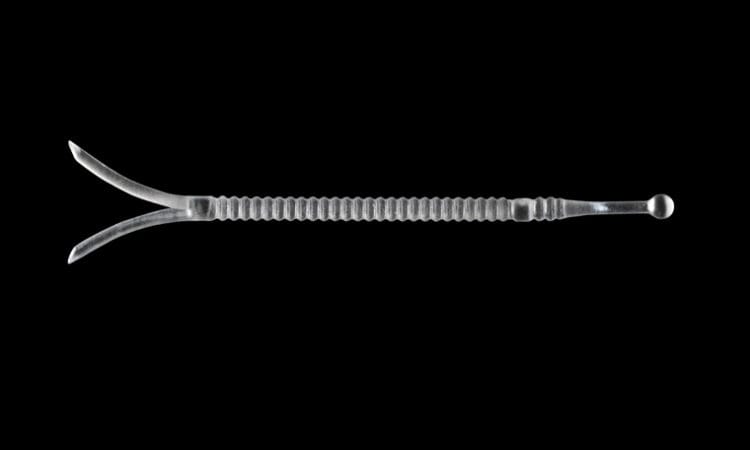 The Latera Absorbable Nasal Implant by Spirox. ( Photo by Spirox)

Per the agreement, Plymouth-based Entellus will give Spirox’s equity holders $25 million in cash and approximately 3.4 million shares of Entellus common stock (worth about $56 million). A cut of the sales from Spirox’s flagship device, the Latera Absorbable Nasal Implant, will also be shared with certain Spirox affiliates, Entellus said.

Although the Latera is relatively fresh to the market—having only received FDA approval July of last year—it has racked up $6 million in sales over the past 12 months. The device, which is shaped like a forked toothpick, rests along the nasal wall and supports the upper and lower lateral cartilage in the nose. Demand is expected to grow among facial plastic surgeons and other ear, nose and throat (ENT) medical professionals, according to Entellus CEO Robert White.

“Nasal airway obstruction impacts as many as 20 million people in the U.S. with nearly one million people undergoing some type of surgical procedure each year,” White said in a statement. “Of surgically treated nasal obstruction patients, over 70 percent may benefit from later wall interventions and can be effectively treated with the Latera implant.”

Demand for the Latera product is expected to grow at a compounded rate of over 40 percent through 2020, Entellus said.

By merging with Redwood City, California-based Spirox, Entellus adds to its portfolio of products used to treat sinusitis.

About a year ago, the local medtech company made a similar move, expanding its portfolio via acquisition. Near the end of June 2016, it paid $11 million for XeroGel, a post-operative product used to reduce bleeding and prevent adhesions following nasal surgery.

As part of its Spirox deal, Entellus will also add two chairs to its board: one for Spirox CEO Duke Rohlen and one for Jim Momtazee, who is a director at Spirox.

“We believe this combination [of Entellus and Spirox] will enhance the near and long-term growth potential of our business and bolster our strategy to deliver less invasive treatment options to ENTs,” White said.

Revenue from Entellus products and services totaled $75 million in its fiscal 2016. In the same announcement of its merger plan, Entellus upped its revenue expectation from the current year to a range of $91.5 million to $94.5 million, representing year-over-year sales growth of 22 to 26 percent. Its previous revenue expectation for its fiscal 2017 year had been $86 million to $89 million.

Following news of the deal and increased forecast, shares of Entellus stock (which closed at $16.51 on Thursday) fell by more than 6 percent as of midday Friday.