Employees Bond In The Paintball Trenches

The game can help build coworker bonds. It's work together, or dye alone.
July 01, 2014 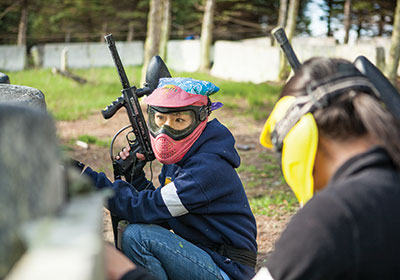 A team of software engineers, a CEO and a director of HR are spread out, defending two hill-top bunkers while a team of salesmen, a CFO and a few accountants strategically traverse the hill to overtake them—all while everyone dodges small balls of paint hurtling through the air at over 200 mph. Sound more exciting than a company picnic?

As the country digs itself out of the recession, businesses are finding more money for corporate outings and retreats. But some companies, instead of taking their employees out for a steak dinner or hosting a seminar on teamwork, are bringing them to paintball parks for team-building training—and a thoroughly entertaining way to show employees they’re appreciated.

Paintball is a more than half-billion-dollar industry in the United States, and Minnesota is home to seven paintball companies with over a dozen venues.

Although nationwide the sport of paintball is contracting, its role in the business world is trending upward.

According to Matt Ames, founder and CEO of MN Pro Paintball, home of the largest paintball park in Minnesota, nearly 15 percent of the company’s business is corporate outings, a portion that has steadily grown in the last two years.

MN Pro Paintball has 150 acres of land in Lakeville, which consist of 12 different paintball “battlefields.”

While the bulk of the company’s private events remain birthday and bachelor parties, Ames says companies large and small are using paintball trips to build camaraderie among employees.

The crew at Minnetronix took great pleasure paint-obliterating each other at a recent outing to
MN Pro Paintball.

“We get a bunch of small groups from huge companies like Target, Best Buy, 3M and Cargill, which will send maybe 10 to 15 employees at a time to play,” says Ames. “Then we’ll also host smaller companies, like mechanic shops or local construction companies, who will bring their whole staff of 30 to 40 people.”

Dave Hansen, director of mechanical engineering at Minnetronix, says he’s been hosting paintball games with a group of fellow employees at his house for the last five or six years but decided last year to get the whole company involved.

Last year, Minnetronix invited MN Pro Paintball to cater a paintball event in the company’s office space. The company was expanding its headquarters and had bought a facility from a business that had just cleared it out. Before Minnetronix renovated the 40,000-square-foot office, the employees turned it into a paintball war zone.

“We used the empty office rooms to act out SWAT team maneuvers and then we had this huge warehouse area where we set up barricades and had an open-field style of play,” Hansen says. “Almost everybody played; our CEO Rich Nazarian was shooting it out with our entry-level employees, and even our brand-new CFO joined in, along with all the engineers and operators. And we even set up this Plexiglass wall so that those who didn’t play could be spectators.”

Hansen says when they play as a company they don’t deliberately tie in team-building exercises, but people inherently develop as a team as they work out strategies and communicate with one another throughout the game.

“For weeks after we have these events, people reminisce about the battles, reenact scenes together and talk about plans for next year together,” Hansen says. “So while the main goal is letting the workers blow off some steam in a fun environment, it does end up being a powerful bonding experience without us orchestrating contrived team-building exercises.

“Plus, we took hundreds of photos that we used in our end-of-the-year album and promotional materials for HR,” he adds. “It’s by far the most talked-about corporate event we’ve ever done.”

Minnetronix spent a couple thousand dollars on the event, for equipment rental plus the cost of the paint and compressed air or CO2 gas for the guns. Hansen says it was an affordable outing for a group of more than 100 people.

That team building may not be deliberate on the company’s part, but when businesses bring groups to the park, Ames sets them up with games that fundamentally build collaborative skills.

“Don’t get me wrong; they are all about getting out of the office and having fun, but at the same time they all say ‘Yeah, of course we want to do team building—that’s the little secret we all tell ourselves to get out of the office with each other,’ ” Ames says. “But we really do believe in the team-building effort, and we’ve put things in place that can demonstrate that.”

At MN Pro Paintball, they focus on what they call objective-based games rather than elimination games.

For example, if a company wants to focus on communication, they can play a game where the goal is to capture three “assets” that are in the field—which can be objects such as a briefcase or a pretend bomb—and bring them back to their respective headquarters. The twist: Half of each team gets their guns taken away at the start of the game, so they contribute to their team by communicating and strategizing rather than shooting—for example, by creating a diversion, or asking for cover fire from the armed half of their team.

According to Ames, players learn to work better together and become closer, whether they realize it or not. “There’s nothing like going to war with someone, the bond you build; no one forgets the first time they play paintball,” he says.

Jim Emmerich, president and owner of Paintball Minnesota, says some of the business groups he sees organize their teams ahead of time based on positions at the company.

If a car dealership schedules a game, they may pit the mechanics against the salesmen to build solidarity within an individual department. He says Eden Prairie-based Redstone Grill brings different restaurant shifts to play as teams against other shifts.

Both paintball businesses say mainly male-dominated industries such as contractors, engineering firms and software companies bring their companies in to play.

“I think the pain of the paintballs can be off-putting for women. We rarely see a group of gals from say, a fabric company,” Emmerich says. “Although that’s something that may be evolving in the future as some new products come out that feature smaller paintballs that shoot at lower velocities.”

Although many companies play annually, Emmerich says a decent amount play only a single time, as a bucket-list event or a reward.

About 10 percent of Paintball Minnesota’s business are corporate groups, which usually book blocks of two to four hours, spending around $100 per person.

Emmerich says his indoor courses help bring in revenue during the colder months, when most of the other paintball courses in the state are nearly deserted.

While MN Pro Paintball is exclusively outdoors right now, Ames says the company is planning a new domed paintball field in Lakeville. Right now about 88 percent of his company’s revenue is made between April 1 and Nov. 31.

The new business, called Escape MSP 701, invites a group of two to eight people into different “themed rooms” that are essentially giant puzzles. Each room has a giant digital clock on the wall that counts backward from 60 minutes. Each group that enters the room has two missions before time runs out: find a hidden asset and escape the room.

“This escape room concept is unreal—I did this in Athens and it was the experience of a lifetime,” Ames says. “It’s really popular overseas but has just made its way to the States in the last five months or so.”

While the group is in the room, they can ask for clues and hints on how to get out; based on the number of people, how many clues they needed and how long it took them to escape, they receive a score and can compare themselves to previous teams.

“Honestly, most people won’t get out in time. We shoot for a 30 percent success rate, which means 70 percent will fail,” Ames says. “This is impossible to complete if you don’t work as a team, and would be a brilliant way to bring a group of employees together and boost enthusiasm.”