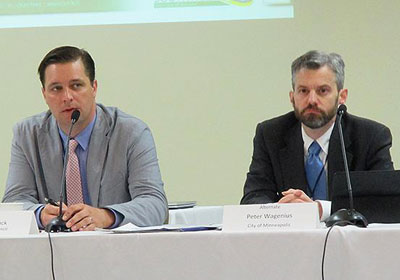 A couple of things are starting to become clear now that a committee of local elected officials has made its second run at cutting $341 million from the budget of the proposed Southwest Light Rail Transit project.

First, those charged with making decisions on the project are giving only cursory attention to suggestions that transit users between downtown Minneapolis and Eden Prairie be served by other transportation modes. Members of the Corridor Management Committee, which makes recommendations to the Metropolitan Council, and the members of the council itself aren’t ready to abandon the expansion of the Green Line toward the southwest suburbs.

Second, the cuts needed to save the project from being scrapped will fall most heavily on the southwestern end of the now 16-mile line. Members of the Corridor Management Committee generally accepted a suggestion to scrap two stations in Eden Prairie. Along with some cuts that apply across the line, eliminating the two Eden Prairie stations would get the decision-makers more than 80 percent toward their target of bringing the project budget back down to $1.66 billion.

Such a move would mean that what are called “stakeholder” cuts — those that apply specifically to the six cities on the line — could be greatly reduced. That makes the solution more politically possible, though certainly not easy. Still to come are decisions about which of the other $150 million in suggested cuts will be accepted and which discarded to find the last $60 million needed.

Under the plan that seemed to have support Wednesday, the line would end at Eden Prairie Town Center, though in a slightly different location than previously. The terminus station would sit at Flying Cloud Drive about 1,500 feet away from current planning.

Other ideas for saving money
Other cuts posed by staff are to eliminate stations at Royalston, Penn and 21st Street in Minneapolis, to reduce park-and-ride facilities around suburban stations and to make reductions in the elevators and stairs that connect Lake Street in Minneapolis with the station on the tracks beneath. All of those cuts, however, do something that project planners need to avoid — cutting too deeply into the number of riders projected to use the system. Under federal transit funding protocols, new light rail systems are graded on how many people they move, how many cars they take off the roads, and what effect they have on economic development. Reduce any of those too much and the project’s grade falls, endangering federal funding.

Met Council Chair Adam Duininck, who also chairs the Corridor Management Committee, said the chore of both groups is to reach two goals: cut the budget while keeping the ridership high enough to be viable. “How do we accomplish goals one and two in a way that we can still keep consensus around the table?” Duininck said.

The current alignment is projected to carry 36,000 riders a day by 2040. Project planners think any reduced plan would have to carry at least 29,000 to be sure of getting a federal match of 50 percent. If all of the suggested cuts were adopted — something that won’t be necessary if the two Eden Prairie stations are eliminated — projected ridership would fall to 22,000. That means additional cuts with the lowest impact on ridership will likely get the most attention.

The cuts at the end of the line and the cuts in Minneapolis received the most objections Wednesday. Eden Prairie Mayor Nancy Tyra-Lukens had already acquiesced to losing the last station at Mitchell Road. But she asked that second-to-the-end Southwest Station be given more consideration before it is taken out of the plan. Southwest serves a high number of so-called transit-dependent people — those without access to cars. It is also a transit hub with connections to regional bus routes and provides access to 3,000 jobs.

Saving Southwest Station, however, would mean nearly all of the cuts to other cities would have to be adopted.

Minneapolis weighs in
The suggested Minneapolis cuts took up most of the discussion with the top policy aide to Mayor Betsy Hodges again suggesting that the Met Council pulled a bait and switch on the city — adding stations and service to get the city to agree to having light rail and freight trains on the same corridor and then cutting those additions once consent was given. Policy Director Peter Wagenius even suggested that if those cuts were approved, the city would insist on revisiting the so-called co-location decision.

“If folks want to drag the project backwards into the freight-routing debate then that is your choice,” Wagenius said. “That is not what the city of Minneapolis is proposing. Just know that is the choice you are making. If you put 21st — or the mitigations that Minneapolis got for swallowing freight — on the table, you are putting the freight routing issue on the table.”

That brought a rebuke from Edina Mayor James Hovland. “I like working in a collaborative way. I don’t like to be threatened to be punched in the nose. ‘It’s not my fault if I punch you in the nose but I’m going to punch you in the nose.’ I don’t think that’s an effective way to communicate with people.” That said, Hovland said he agrees that the Royalston Station and the 21st Avenue Station are important and is leaning toward supporting retention of the Penn Street Station.

Hennepin County Board Chair Jan Callison said her read of the committee is that some of the cuts Wagenius and Hodges most object to would not be part of a final proposal. “I haven’t heard advocacy for deleting Royalston. … I would not want staff to spend a lot of time chasing a red herring if Royalston is not really on the table for deletion.”

The committee finally got another important piece of what Gov. Mark Dayton demanded back in April when the project budget increased from $1.66 billion to just under $2 billion. Called the Transit Options Review, the report was to examine other transit modes such as bus rapid transit or enhanced traditional bus service and determine whether they could serve the southwest suburbs cheaper and as well as light rail.

BRT: cheaper, but has significant drawbacks
The answer? No, at least according to a staff study. If bus rapid transit were built on the same right of way that is proposed for light rail, with the same number of stations and park and ride facilities, the route would have half the number of riders as light rail and less than half the congestion relief. It would also delay the project because the Met Council would have to restart the process of environmental review, municipal consent and federal approval.

Boosting bus frequency and amenities would have even fewer riders but the longest travel times.

Wagenius said he agreed that LRT is the preferred mode for the corridor but asked if Met Council staff had responded to a letter sent last month by state Sen. Scott Dibble and Rep. Frank Hornstein that proposed a hybrid that would be much cheaper. The pair of DFL lawmakers from Minneapolis suggested using light rail from Target Field Station to the end of the existing freight rail corridors at Shady Oak Station in Hopkins and then bus rapid transit on existing arterials to the current proposed terminus at Mitchell Road.

Duininck said staff would respond but that the letter came too late to be included in the alternatives analysis and that there wasn’t time to do cost estimates before the full Met Council will decide on a new budget on July 8.

Crucial meeting on July 8
The advisory committees will continue to meet, culminating in the crucial Met Council meeting on July 8. At the same time Met Council is accepting public and government comments on a draft supplemental environmental impact statement until July 21. Fuhrmann said he anticipates the final EIS to be submitted to the Federal Transit Administration in the first few months of 2016 with the FTA’s acceptance coming next spring.

He then expects to receive a full-funding agreement by the end of 2016 before the Obama administration ends. That depends, however, on the 2016 state Legislature providing the final chunk of project funding — $166 million. The other local shares are already in place — $166 million from Hennepin County and $498 million from the Counties Transit Improvement Board which collects a quarter-cent sales tax in the five metro area counties.