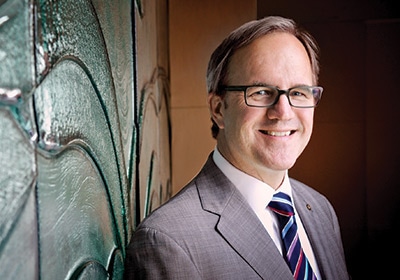 Doug Baker, the CEO of Ecolab

The unit made up roughly 2 percent of Ecolab’s overall business.
By Sam Schaust
October 12, 2017

St. Paul-based Ecolab has agreed to sell its equipment care business, a unit used by commercial kitchens and hotels for appliance repair.

Investment firm Audax Private Equity, based in Boston, is buying the business for an undisclosed amount. The sale is expected to close before the end of the year, pending regulatory approval.

Approximately 830 full-timers worked for the business, said Ecolab spokesman Michael Monahan. About half of the staff are on-the-field technicians who would repair equipment such as ovens, refrigerators, dishwashers and blenders for restaurants and other commercial organizations.

The unit, which ran its operations out of Ecolab’s headquarters, was established in 1998 through a series of acquisitions.

“We had nothing to begin with,” Monahan said. “We acquired a number of businesses and built it up organically.”

Ecolab wasn’t publicly shopping the business, according to Monahan. “It just kind of happened,” he said. “Our CEO [Doug Baker] likes to say, ‘We love our businesses until someone loves them better’… There’s always someone snooping around and sometimes deals work out, but most times [they do] not.”

Upon approval of the deal, Ecolab’s equipment care business will join Audax’s packed portfolio, which includes over 100 companies across a number of industries, from health care to software. The unit, however, won’t be the first Minnesota business to receive an investment from Audax.

“This sale [of the equipment care business] enables us to sharpen our strategic focus on our core businesses, while assuring equipment care customers will receive excellent ongoing service,” said Ecolab CEO Doug Baker Jr. in a statement. “In addition, our equipment care colleagues will benefit from Audax’s focus on the business and will have access to resources that will support future growth. We thank them for their many contributions and wish them every success in the future.”