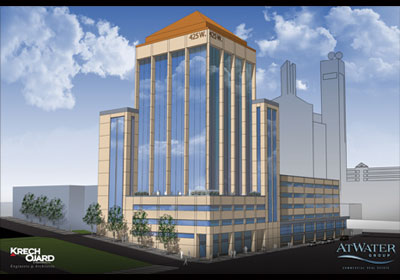 Here are some of the bigger Duluth development projects.
August 05, 2013

According to Christopher Eng, director of Duluth’s department of business and economic development, the city has about $200 million in new construction projects—recently completed, just starting, or starting in the next year. Here’s a list of some of the bigger projects.

Maurices headquarters. The Duluth-based women’s clothing retailer, whose stores are in smaller cities and suburban locations across the country, now employs 400, and plans to hire 100 to 200 more in the next few years. Bursting at the seams of its warren of downtown office spaces, it will be moving in to a new $60 million building on Superior Street. Construction is expected to be completed in 2015.

NorShor Theater. Twin Cities-based developer George Sherman has $20 million worth of projects in Duluth. Perhaps his highest-profile project is the planned renovation of the Superior Street movie theater into a new home for the Duluth Playhouse.

Duluth International Airport. This $78 million expansion, completed earlier this year, has earned a LEED silver certification for its eco-friendly design. Passenger counts are up, thanks in large part to the three daily flights to Chicago.

St. Luke’s Health Care. An $80 million investment in its downtown campus, which includes a $47 million expansion.

Pier B. A former cement plant site is being converted into a $30 million resort/retail development on the waterfront just southwest of Canal Park. Construction will begin in August, to be completed by summer 2015.

Ramsey 4. Twelve new units of workforce housing in West Duluth under development by the Minneapolis firm Thies and Talle Management.

Multimodal transit center. Though this downtown project will focus on the local bus system, the city also hopes it will be the terminal of the proposed Northern Lights Express passenger train between Duluth and the Twin Cities.

Bluestone Commons. This $20 million project near the University of Minnesota Duluth campus will include 250 housing units, along with 40,000 square feet of retail space. The first phase will be completed in August, with a second phase to be finished by August 2014.