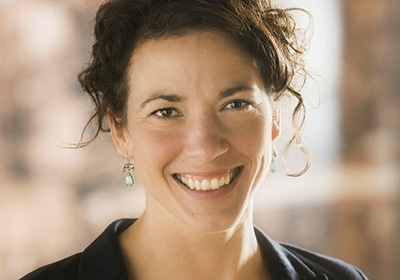 Emily Larson is blazing her own economic development trail as Duluth’s mayor, while building on the city’s strengths.
December 01, 2016

The view from Duluth Mayor Emily Larson’s large office window isn’t quite what past mayors enjoyed. “It used to be of the lake and the Aerial Lift Bridge,” she says. Dominating her sightline of Lake Superior is the new headquarters of Maurices, a women’s clothing chain that opened in April.

But she’s not complaining. “It’s a more beautiful view to me now,” says Larson. She characterizes the new structure as “the biggest single development we’ve had in downtown Duluth’s history.”

At 200,000 square feet and 11 stories, the Maurices building could be considered modest by downtown Minneapolis measures. Yet for Larson, it’s a sign that Duluth is evolving and moving forward. And that’s something she wants to capitalize on—the story of a distinctive city that has become more confident of its future.

Larson succeeded the highly popular Don Ness as mayor. During his two-term tenure, Ness oversaw Duluth’s rise from a city with dire municipal financial challenges to one that is optimistically stable. Larson is a former City Council president who was handily elected in 2015. While her administration is extending Ness’ legacy and the successes that preceded him, she’s definitely staking out her own bike trail.

A native of St. Paul, she visited Duluth frequently on vacation with her family. As an undergraduate she enrolled at the College of St. Scholastica in Duluth, and later earned a master’s degree at the University of Minnesota, Duluth (UMD). She’s been a Duluthian ever since. She has worked as a social worker and run her own nonprofit consultancy, and she was elected to the City Council in 2011. During her council tenure, she also served on the board of the Duluth Economic Development Authority.

She’s been moving rapidly on many fronts since her election as mayor. One of her pursuits is blending the arts and economic development. Though a city of 86,000, Duluth is home to a ballet company, a symphony orchestra, and lively music and theater scenes. “We have an incredible set of cultural assets here in Duluth,” Larson says. “For us, the creative economy yields $40 million of economic development.” To Larson, there’s more to the arts than the money spent by locals and visitors. They also provide ways for citizens to “tell their stories,” which she says can provide stronger ties to the city and its culture.

In Duluth, Larson also points to what she calls “the working arts,” which include small breweries, glass blowers, camping equipment makers and other craft-oriented businesses. She’s particularly eager to encourage and help fund start-up and established businesses clustering in the western part of the city.

Not all Duluth entrepreneurs have needed funding help. But Craig Simonson, who founded Pure Clean in 2012 while a junior at UMD, says the city’s strong sense of community has made it easier to get an idea off the ground. In addition to operating his building-cleaning business, which has expanded to the Twin Cities, Simonson runs the Duluth chapter of Club E, a program for area entrepreneurs. “There are so many amazing companies here,” he says, and the environment in which they’ve launched is very supportive.

To bolster up-and-coming entrepreneurial companies that do need financial help, Larson is revamping Duluth’s small-business loan programs. “I do have a focus on wanting to help these businesses grow from five employees to 10,” she says. “That’s actually where I see that Duluth will have a considerable opportunity. It’s going to be rare for us to have these large-scale employers that other, larger metro areas can get.”

At the same time, Larson also wants to continue building on the larger industrial and manufacturing businesses that are in Duluth. Case in point: The city kicked in $10 million to help Cirrus Aircraft build a jet-manufacturing facility. “We have 25 businesses in the aviation sector that you don’t hear about that help build up the opportunity for Cirrus to be successful,” Larson says. That sector alone has an economic impact of over $1 billion, she adds.

Of course, Duluth faces challenges. Its population and job growth have been flat since the recession, though the city’s unemployment rate has been low, floating around 4 percent. Duluth also continues to wrestle with its aging infrastructure. To address that issue, Larson is tripling the number of streets to be repaired, despite the city’s tight budget.

Gridlock at the Minnesota Legislature dashed Duluth’s hopes for nearly $500,000 in additional Local Government Aid (LGA) funding. A bonding bill would have helped the Zenith City update its downtown steam plant and make investments in the airport, zoo and other projects. But a bonding bill also was a casualty of the standoff between Democrats and Republicans.

Wayne Parson, Duluth’s CFO, says Duluth expects to receive $29.3 million in LGA for 2017. That figure would have been almost $29.8 million if the proposed increase of $482,363 had been enacted into law.

“This proposed increase was a permanent increase in the LGA formula and would have carried forward to 2018 and beyond,” Parson says. Because Duluth won’t be getting that additional funding, Parson says, “the city chose to delay the hiring of replacement workers for open positions rather than make permanent layoffs.” Positions in the mayor’s office, IT division, library, finance and police departments were affected by the delayed hiring decision, he says.

Still, there’s been $300 million in investment in downtown Duluth in the past few years, with the $80 million Maurices building the largest project. The building that once housed Duluth’s most notorious downtown retailer, the Last Place on Earth, is being transformed into a brewery and taproom. Elsewhere in the city, new apartment buildings will add 270 rental units within the next year, mostly in the “working professional” price range, Larson says.

Larson also emphasizes updating the city’s comprehensive plan, called Imagine Duluth, which will address land use, transportation, housing and open-space needs. She says she wants to be a “get it done” mayor. And she wants to help Duluthians write their city’s next chapter.