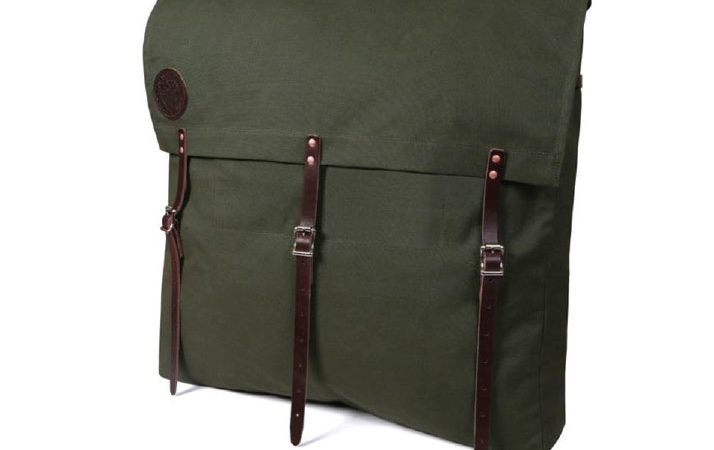 The new location will house the bag and backpack manufacturer's marketing staff.
By Gene Rebeck
July 10, 2018

On Monday, the Duluth Area Chamber of Commerce held a ribbon-cutting for Duluth Pack’s fourth location. That location wasn’t a new store, but a new location for the firm’s marketing staff.

The 136-year-old bag and backpack manufacturer, which now employs more than 100, has plans to grow even more. And that marketing group—which includes public relations, graphic design, photography and social media staff—is key to those plans as Duluth Pack builds upon its online presence.

Sometimes known as the great-grandpa of Duluth’s cut-and-sew industry, Duluth Pack was founded in 1882 as a manufacturer of camping backpacks. The company now ranks as the oldest canvas and leather bag and pack manufacturer in the U.S. Its products are all produced in a production facility built in 1911 in Duluth’s Lincoln Park neighborhood and the company continues to use many of its original production techniques, including hand-cut, hand-traced leather and hand-pounded rivets.

The marketing location is just a short walk from Duluth Pack’s production facility. Last year, the company updated its one-and-only brick-and-mortar store, located on Duluth’s Canal Park. Its other facility is its distribution center, also in Duluth. The “new” building, an Art Deco structure in cream-colored brick, was actually constructed nearly a century ago. Formerly the office of a neighborhood newspaper, it has been unused for several years.

But Duluth Pack’s new building is more about its future than its past. Its old-school, made-in the-USA goods recently made their way to the silver screen, earning the appreciation of celebrity fans and fashionista “influencers.” While the Canal Park store remains the center of the company’s sales, “we now have distributors all over the world,” Duluth Pack spokesperson Andrea Sega says. “You can find Duluth Pack in the U.K. and Japan. And we still have that story—everything is made in Duluth.”

The marketing folks who are helping to drive that global growth work amid vintage lamps and wood flooring, “which is something we wanted to keep [in the new space] because we value that really cool heritage,” Sega says.