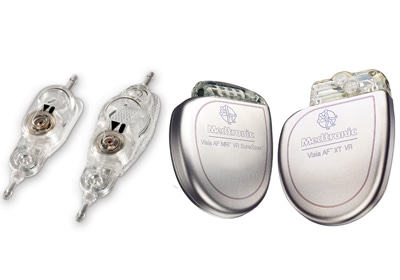 Drain Your Brain And Monitor Your Heart: The Newest Devices From Medtronic

Three of the medical device maker’s latest innovations were given the thumbs up from the FDA.
May 12, 2016

Medtronic announced Monday it had received clearance or approval from the U.S. Food and Drug Administration on three new devices.

Two of the medical devices by the Irish-based company are single-chamber implantable cardioverter defibrillators, or ICDs. The Visia AF MRI SureScan and Visia AF were approved to treat atrial fibrillation, a condition where the heart quivers irregularly or beats rapidly out of rhythm. Medtronic’s Visia AF devices allow doctors and their patients to better detect arrhythmia. Frequently, the condition goes unchecked as many patients do not experience symptoms.

“Approximately 75 percent of ICD patients have no history of atrial fibrillation at the time they receive a device,” said Edward J. Schloss, director of cardiac electrophysiology at The Christ Hospital in Cincinnati. “The Visia AF ICDs give physicians a new tool to monitor for [atrial fibrillation] in patients with VR ICDs, which may allow them to identify and treat [atrial fibrillation] earlier to potentially help avoid other serious conditions.”

The FDA also cleared Medtronic’s StrataMR valves and shunts for treatment of patients with hydrocephalus and cerebrospinal fluid (CSF) disorders.

“I see many implications for the use of the new StrataMR, especially with patients who need to have their valves re-checked after MR imaging,” said Marion L. Walker, a professor of neurosurgery at the University of Utah. “Also, this technology will benefit those patients who are concerned about their exposure to strong magnets. This technology may cut down on some of the insecurities those patients feel.”

The StrataMR system contains a magnet that allows neurosurgeons to adjust performance level settings when performing magnetic resonance imaging, also known as an MRI. When scanning for hydrocephalus—also called “water on the brain”— and CRF disorders, the device can read where in a person’s brain there are ventricles that are, in a sense, overflowing.

More than 1 million children and adults in the U.S. are affected by hydrocephalus and CSF disorders. If left untreated, the condition can result in enlarged heads, headaches, nausea and a significantly reduced quality of life.

Medtronic’s StrataMR device will become available to physicians in the coming months.