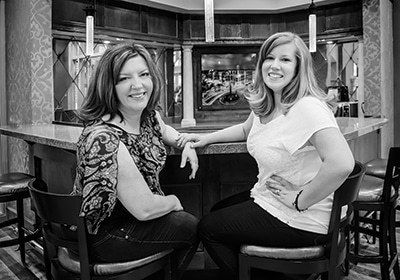 Doing What A Really Good Martha Stewart Does

Rhoda Mehl, co-owner of the growing personal-services business Nook & Cranny, trained as an actress and a mime. She studied mime seriously for years, including a summer with Marcel Marceau. She can depict just about anyone. But the role she is most practiced at is, as she puts it, a wife for hire.

“Pretty much everybody needs a really good wife circa 1950,” she says with a big laugh, sipping a coffee near her office in Hopkins. “Someone who takes care of your life. That’s us!”

Mehl learned about the joys of serving in the restaurant business, most notably as the head server at Bar Abilene, where she found a mentor in impresario FranÃ§ois Paradeise. “He told me you’re either a server or you’re not, it will either annoy you or it will bless you,” she says. “It blesses me.”

She stayed at Bar Abilene for six years before seeking a change. “I didn’t want to go into restaurant management. It’s 60 hours a week of absolutely draining chaos,” she says.

One thing that occurred to her was cleaning houses. “When money was slow waiting tables, I charged $75 for a house clean, which was great. That was one night of tips. And I could book them in convenient times for me.”

She did some grassroots marketing, pinning up business cards at the recently departed Anodyne Coffee Shop near her house at 47th and Portland in south Minneapolis. “I figured that anybody who went there would make for great clients,” she says. “My thought was if I could get 12 clients I could start lessening the number of shifts I was doing at the restaurant.”

“The thing was alive! It was like Little Shop of Horrors—feed me, feed me! It constantly needed attention,” she says.

With that attention came new opportunities. Light bulbs started to go on. Literally.

“One day I was with one of our clients and she asked if we could let the dogs out, and I have a light bulb out in the bathroom. I swear this is what happened: As soon as I changed that light bulb, the light bulb in my head turned on. I’m like, you’re kidding me. I was doing this whole house on a flat rate and now I’m doing all of these things that aren’t cleaning, but I’m not going to say no because I’m trained to say yes.”

The company started landscaping, washing cars, walking dogs, house sitting—all manner of tasks. The vision was to create a personal hotel for clients. “We wanted to take away all the worry in the lives of our clients,” she says.

Those were busy times. “Oh, we went until it hurt. It didn’t take long, four or five months of that, to learn what we could handle. We started to learn what structure is about, roles, job descriptions. When people say, ‘How do you start a business?’ [the answer is] you start it by just going, but then once you’re doing it you have to listen. And then while you’re learning, if you trust the process it will tell you what to do.”

Ashleigh Smerick later came on as director of operations, leaving for a while to have a baby and coming back last year. “People started to see us as a one-stop shop. They gained the trust with the cleaning, and they started to ask us to do more things.”

The challenge became to broaden the business, which is 75 percent housecleaning, to include lifestyle-assistance services with several skill sets: housecleaning, home chores, grocery shopping, preliminary prep for dinners at home. “We asked ourselves, ‘What does a really good Martha Stewart do?’ That was what we used as our measuring stick,” Mehl says.

They made it through two economic downturns by being willing to right-size. “We got hit in 2007 with a $5,000 decrease in revenue when the downturn happened. Then it just started to vibrate at a lower level. We did have to downsize for a while, cut all the administrative staff and HR help and all the extra things that you’re contracting out; we got lean and mean and really small. There’s no need to end your business. We just had to go small. In 2008 we had a staff of just eight people. In the summer we’d hire more, to 12, and then [go] back down,” Mehl says.

Mehl, ever the performer, still misses entertaining, but feels she gets enough of a creative buzz through Nook & Cranny.

“In the end this is the stage right here,” she says.