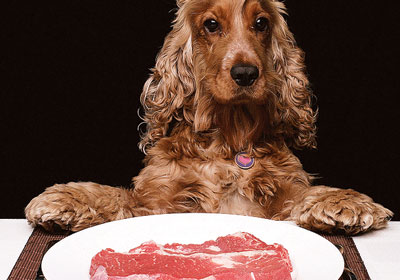 Melissa Amundsen is a vegetarian. Yet every Saturday, she stops by Woody’s Pet Food Deli in south Minneapolis to buy raw ground chicken for her cat, Walter.

“Walter was having health problems, so I researched food and switched to feeding raw,” Amundsen says. “Walter’s health problems cleared up and his coat shines. It just makes sense.”

Amundsen is one of a growing number of pet owners who believe that processed foods filled with human-food byproducts are unnatural for pets to eat. The raw-meat-based alternatives that some owners turn to go by the unfortunate acronym BARF, for biologically appropriate raw foods. As Woody’s proprietor Enrique Palma says, “Dogs and cats are carnivores, and raw food is what they should be eating. They are built for it.”

Palma, a native of the Philippines, named his business after a rescue dog that his family adopted in 2006. Woody was eating dry dog food, but was sickly, malnourished, and racking up vet bills, Palma says. “I decided to feed Woody the way my Mom would. I started with gently cooked eggs and chicken, and transitioned to raw.” He says Woody got better, and in July 2008 a business was born.

Palma keeps his freezers stocked with raw and lightly cooked meat—everything from chicken, beef, and pork to lamb, elk, and bison—some of it unsupplemented, some of it mixed with added nutrients. Prices range from $1.39 to $6.09 a pound.

It’s a price pet owners are willing to pay. In August, two years after he cofounded his business with his wife, Palma opened a second store, on Snelling Avenue in St. Paul.