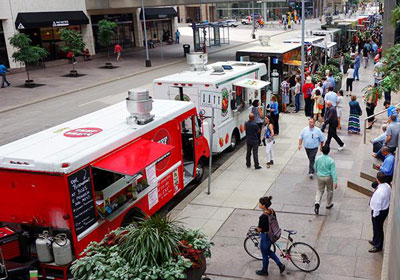 Does Minneapolis Have Too Many—Or Too Few—Rules Governing Food Trucks?

Some downtown building owners think Minneapolis should tighten regulations, while food truck operators think the city should give them more freedom.
September 02, 2016

Minneapolis has some pretty liberal rules for food trucks.

It sort of depends on whether you own one or not. Some downtown building owners think the city should tighten regulations and limit the current concentration of the popular food vendors on one or two downtown streets. Spread the joy, they say. Help regular restaurants compete.

“We’ve always said food trucks provide a benefit to workers in downtown Minneapolis,” said Kevin Lewis, the executive director of the Building Owners and Managers Association (BOMA). “The issue is the heavy concentration in the central area — on certain streets, in certain areas — while other areas are underserved.”

Food truck operators, though, wish Minneapolis would open up more of the city to the trucks — and for longer hours. Since weather keeps many food trucks from running year-round, they need to do as well as possible when the sun’s shining.

“We’d like the freedom to vend in any location because it comes down to consumer choice,” said Megan Gaffney, who co-owns The Midnord Empanada Truck and is executive vice president of the food truck association.

Minneapolis officials think the city has come down somewhere in between, a happy medium. And it's true that neither side is complaining too much. It’s just that if they ruled the world, well …

Food Truck Advocacy
John Levy has an interesting combination of skills when it comes to food trucks and government regulation. He is a lawyer with Nilan Johnson Lewis. He also is a partner with chef and media personality Andrew Zimmern in a business that included a food truck — AZ Canteen — as well as concession stands in sports arenas (they no longer operate the truck). He founded the food truck association in 2013 with a goal of increasing opportunities for food trucks, venues that already operate at a disadvantage in Minnesota because of winter weather.

“When I speak to the Downtown Council I ask, ‘What do you want to be when you grow up?’ ” Levy said. “Do you want to be a real city or a rinky dink city?” Real cities, he said, want to have the vibrancy that food trucks bring to city streets more often, not less.

For the most part, if a vendor can find a legal street parking space (or two, given the size of the trucks) and “feed the meter,” they can vend their fare from there. But city regulations tend to restrict food trucks to the noon hour, at special events or at craft breweries and distilleries, Levy said.


The city makes trucks close at midnight (or 10 p.m. if within 300 feet of a residential building), which prevents them from serving late-night patrons of downtown bars and clubs. “To me it just seems a no-brainer is to allow the food trucks around bar closing time,” Levy said.

Police officials object to the idea because they want the area around downtown clubs to clear out as quickly as possible. But Levy argues that the combination of food and time could limit the ill-effects of too much drinking as people head home.

Some of the other rules that keep trucks out of nightlife areas: they can’t park in a space if there is a bike lane between the parking space and the curb (think the former 1st Avenue configuration downtown). And they can’t set up within 100 feet of a sidewalk cafe or within 100 feet of a restaurant with a door to the sidewalk.

The rules don’t stop there. Food trucks can’t operate within 200 feet of a fair or festival or Minneapolis Park & Recreation Board property without permission, even on right of way owned by the city. The same is true of public property within 500 feet of a sports stadium or arena. All have their own vendors who aren’t keen on extra competition.

Strength in numbers
Given all the limits on when and where they can operate, Gaffney said truck owners definitely would object to limits on the number of trucks on a given downtown street. They all do better when they vend together, she said.

“It’s absolutely about making going to the food trucks a destination,” she said. “We’ve seen every season we’ve been doing this — whether it’s at an event or on the street — when the food trucks are clustered together all of them do better. It creates an opportunity for people to taste more food. They can get their group together to go for lunch.”

Marquette Avenue had been the prime street for food trucks until a group of truck owners decided to take a chance on adding 2nd Avenue to the mix. This summer, thanks to street repairs on Marquette, 2nd Avenue is the sole spot. That puts a premium on getting one of those spaces, creating pressure on operators. Lewis of BOMA said he notices trucks circling the block around 8:45 a.m. because parking on 2nd Avenue doesn’t open up until 9.

“It’s like when the music stops, everyone jumps for a chair,” Lewis said.

Gaffney said it is a hassle to circle and be in position to get a spot. Getting one, however, can make a big difference in a day’s sales. She calls it “winning the lottery.” While operators want to establish other areas downtown where they can gather, it takes a group of them to agree to venture off and wait until that location becomes known to customers and catches on.

Steve Ramlow is better known as “Simply Steve” to fans of his food truck. He said he has stopped circling for those choice downtown spaces, calling it “too stressful” to circle the block for a half hour each morning. He said the reason other areas aren’t opened up is the fault of truck owners who worry that they won’t do as well. But he said he and a handful of other food truck operators have been parking near the new Commons Park between Park and Portland avenues.

Growth industry?
On a recent weekday, 11 trucks filled 2nd Avenue South from S. 5th Street to S. 6th Street, making sidewalks crowded but not impassable. The triangular rise of seating framing the Canadian Pacific building plaza was filled with diners with their lunch selections on their laps.

At the same time, skyway restaurants were busy and the dueling lines at Naf Naf Grill and Chipotle both snaked into the U.S. Bank Plaza building lobby.

According to city staff, there are now 105 licensed food trucks in Minneapolis paying $818 per license, up from 96 just seven months ago. And those trucks are associated with 29 brick and mortar restaurants in town, up from 18 in January.

The city sees those numbers as a positive, reflecting increased vitality on city streets and in the food industry. Beginning with the adoption of the first ordinance in 2010, food trucks have had a friend in city hall, first with Mayor R.T. Rybak and continuing with Mayor Betsy Hodges.

“We get no traction at all,” voicing concerns, said Hans Okerstrom, the general manager of the Baker Center downtown. “Food trucks are so popular, no politician wants to put any limits on them.”

Such support surfaced in January, for example, when City Council Member Lisa Goodman delivered a preemptive shhhsh to Lewis and Okerstrom. At issue was some minor changes to an ordinance reiterating a new state law stating trucks are not to park within 20 feet of an intersection and 30 feet of a traffic sign or signal. The law removed permission for food trucks to operate on sidewalks. (“Frankly,” city licensing official Linda Roberts told the committee, “operating on sidewalks wasn’t the best idea.”) Finally, the ordinance also eliminated a rule that trucks must operate for at least 150 days a year and increased the number of trucks — from one to three — that can operate in private lots outside of downtown. (It’s still just one in downtown lots.)

They didn’t. The changes passed the council on a unanimous voice vote.