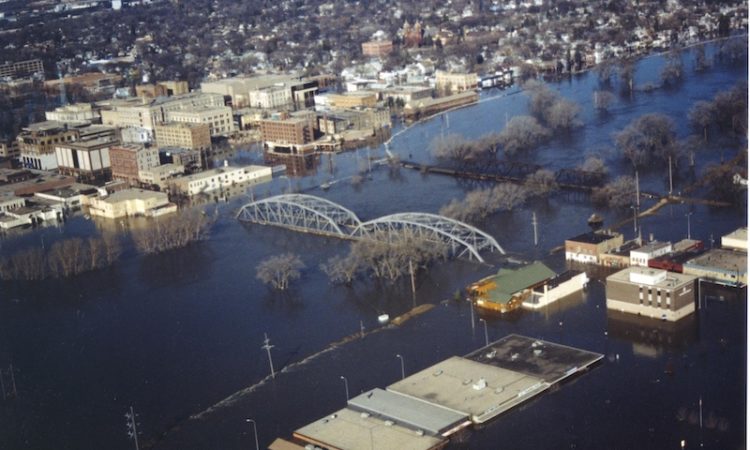 While the coronavirus is formidable, a former congressman offers lessons on how businesses and community members overcame a past disaster of major proportion.
By Liz Fedor
April 08, 2020

When Gov. Tim Walz and Queen Elizabeth delivered their Sunday addresses about the coronavirus threat, their somber messages and calls for united action evoked the spirit of fireside chats employed by Franklin Delano Roosevelt.

Walz, speaking while self-quarantined at the Minnesota governor’s residence, and the queen, who served as a military mechanic during World War II, didn’t sugarcoat the scope of the health and economic challenges caused by the Covid-19 pandemic.

They were both speaking from their homes to people who are staying at home to limit the spread of the virus. During the Great Depression, when people had little money to spend, they gathered around their radios to hear FDR paint vivid pictures of the enormity of the economic challenges and then explain what he was doing to move the country toward recovery.

None of us wants to experience a Great Depression 2.0. We suffered enough during the Great Recession that resulted from the financial crisis of 2008. But we can’t ignore the fact that, for many people and businesses, we are in for a rough ride in 2020.

“We are resilient people with a deep reserve of courage, optimism and grit,” Walz said Sunday. “But this will be a winter like we’ve never seen before.” He characterized the coronavirus as “a storm of epic proportions.”

The British monarch, who did not simply read about Nazi invasions in history books, also acknowledged the difficult sacrifices that people are making. Yet Walz and Queen Elizabeth conveyed a sense of hope for the future. “Spring will arrive,” Walz said. “And when it does, we will dig out. We will do whatever it takes to support Minnesotans and businesses to get back on their feet.”

We know people’s lives and Minnesota businesses cannot remain in a state of suspended animation, but it’s unclear when a more normal economy will emerge.

Lessons from a disastrous flood

Since the shutdown of large parts of the economy in mid-March, I’ve frequently thought about a natural disaster that I experienced in 1997. When the Red River of the North topped the dikes, the city of Grand Forks was swamped on the North Dakota side of the river and East Grand Forks was devastated on the Minnesota side.

While many Minnesotans are currently frustrated because they are homebound, in 1997 residents of Grand Forks and East Grand Forks were desperate to return to the flooded cities to assess the damage to their homes and businesses.

At that time, I was a Grand Forks Herald reporter and covered the flood disaster and the fire that destroyed or damaged 11 downtown Grand Forks buildings, including one owned by the newspaper.

Back in 1997, North Dakota’s lone congressman was Earl Pomeroy. He was there during periods of great fear, hopelessness, anger, frustration, and an ultimate recovery. I hadn’t been in touch with Pomeroy since early 1999, when I left the Herald for a job at the Star Tribune.

During the coronavirus disaster, I thought it was a good time to reconnect with Pomeroy. I asked him to share lessons from the Grand Forks flood, which may help people and businesses cope and recover in 2020.

Even though I had not interviewed Pomeroy in 21 years, he followed the neighborly North Dakota protocol and responded to my email on the same day. Pomeroy, who served in the U.S. House for 18 years, now is a senior counsel in the Washington, D.C. office of the Alston & Bird law firm.

While holding public office, Pomeroy was a realist. He focused on solutions that could garner support, and he wasn’t an ideologue within the Democratic Party.

Here are the lessons that Pomeroy shared with me:

When one thinks things can’t get worse, they can and very possibly will. In April 1997, people were physically and emotionally exhausted from the flood fight. On a Saturday, as residents were evacuating Grand Forks because water had overtaken their neighborhoods, the situation worsened. Pomeroy was part of the exodus and headed for shelter at the Grand Forks Air Force Base. “I saw an ugly plume of black smoke in the rear-view mirror and heard over the radio the inundated downtown was also on fire,” Pomeroy said. With several feet of floodwater moving through the streets, firefighters were limited in their ability to fight the fires that had spread from rooftop to rooftop.

In the coronavirus crisis, it cannot be overstated that it is challenging to deliver help in a nationwide disaster. Even when federal and state governments respond with relief measures, financial futures can appear precarious because so many people and businesses are trying to get loans and other assistance simultaneously. Some of them are failing to get the program access or approvals they badly need.

People have greater strength and resiliency than they can imagine. Walz has implored citizens and businesses to pull together as One Minnesota, which means collectively tackling challenges that haven’t yet surfaced. In 1997, Pomeroy said, “Noticeably absent in the depth of the crisis was self-pity. People put one foot in front of the other and carried on, not knowing what was coming next nor how they would manage.” He observed the Grand Forks residents, on a daily basis, focused on what they could do to repair their homes, businesses and lives.

Resilience is tested as things take time to return to normal. When one is tossed into a chaotic situation, people try to create new routines. In the coronavirus disaster, parents are trying to work from home and oversee their children’s education at home. After a while, Pomeroy said, “not having the old normal back is depressing.” In Grand Forks, he acknowledged that people became “pretty crabby” because recovery efforts did not keep pace with their expectations.

“Block after city block of thousands of modest income households had taken terrible financial losses,” he said. “Waiting for FEMA help and then adjusting to lower net worth realities were broadly shared miseries which were difficult experiences no one would want to do again.”

Keep moving forward. Pomeroy made reference to a close friend dying after the man valiantly battled cancer. The man’s widow clearly was grieving. But, he said, she persevered by “addressing tasks before her as best as she could and gradually an equilibrium was restored in her unwelcome new normal.”

In the current coronavirus environment, the message seems to be to take steps daily to move forward. It can mean applying for an SBA loan, watching a webinar about repositioning a business, or doing whatever makes sense to avoid being paralyzed by fear and frustration.

Preserve one’s sense of humor. When he was at the emergency shelter at the Grand Forks Air Force Base, Pomeroy said, “I remember complimenting a couple of elderly ladies on how good they looked despite all they had been through.” The women fled their homes, were sleeping on air base cots, yet they were dressed neatly and had styled their hair. One of the women quipped to Pomeroy that they wanted to look as good as possible because of the handsome soldiers.

“When one can laugh, one can cope, come what may,” Pomeroy said. “When one can step out of the calamity of the moment, each of us will be encountering circumstances so unfamiliar there will inevitably be humor to be found in them.”

Pomeroy, Walz, and Queen Elizabeth recognize the scope of the problems that the coronavirus presents. But each of them is emphasizing that we won’t be stuck in a crisis forever, and we can seize some control over our lives by making decisions that will serve us in the short-term and long-term.

Actions that individuals and employers take in the coming weeks and months will have a profound effect on the condition of our economy in 2020 and 2021.

Nobody has the perfect playbook for navigating what lies ahead. But Pomeroy’s advice bears the wisdom of experience. We need to keep moving forward in intelligent ways, and we must avoid allowing setbacks to sap the resilience we need to get through the crisis.

Liz Fedor is TCB’s Trending editor, and a former reporter, columnist and editor for the Grand Forks Herald.