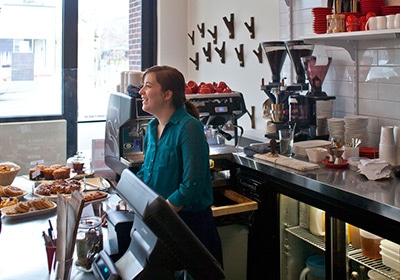 Dining Review: The Lynn On Bryant

Serving everything from doughnuts to snails, it's another chef-driven Minneapolis neighborhood charmer.
December 02, 2013

The Lynn is the pretty girl you just want to fall in love with. It’s a restaurant that exudes cheer, its bright white interior blending bursts of color and intriguing found art (mostly glass telephone pole insulators) to create a singular allure. There’s nothing derivative about the Lynn. Its menu is not large, but it is broad, attempting an all-things-to-all people vibe that its East Harriet neighbors surely can get their arms around.

The most apt recent comparison I can make is the Kenwood a few miles north, which doesn’t attempt the Lynn’s breadth, choosing to focus on a more limited array of dishes and food styles, to great acclaim. The Lynn offers more (including an enormous menu of takeaway-type gourmet fare), but not with the consistency of the Kenwood, and its hours have been shrinking, diminishing its value as a neighborhood resource.

The Lynn serves dinner five nights a week, its French-influenced menu an alluring beacon for southwest Minneapolis. Highlights include a gutsy and assertive fricassee of escargot over garlic and parsley purÃ©es, salt cod fritters, an excellent, perfectly cooked burger, and superb French fries.

More ambitious fare is either not well-conceived or executed with flaws. Rabbit two ways included savory leg meat and a dull saddle, served in a broth that diminished the dish rather than enlivening it. Chicken leg jambonette came delightfully crisp, but quite tough, stuffed with a Basquaise sausage and served with a stellar cous cous; probably too much going on here. More often, blandness marred smart dishes, including chickpea fries with salsa verde, a dull succotash that tasted as if it had been poached, and an austere mushroom fricassee that lacked any caramelization.

Brunch is the Lynn’s bread and butter, though my experience there was no more consistent. Don’t miss the apple cider doughnuts or house pÃ¢tÃ© with cornichons. But I found all of the kitchen’s breakfast meats unappealing (the touted maple bacon steak was unpleasantly fatty), eggs arrived lukewarm, and the signature potato cake alongside lacked crispness or salt.

Service is friendly, if not always fully engaged, and the wine list is fresh and attractively priced. The bill is moderate, but prices are high enough to demand a greater degree of consistency and refinement.

The Lynn feels like a neighborhood bistro should, but my meals there indicate a restaurant in need of focusing. It could succeed by simplifying its offerings or upping its culinary game. Either direction would make it a thoroughly appealing package.

Limited hours, too many unsuccessful dishes.