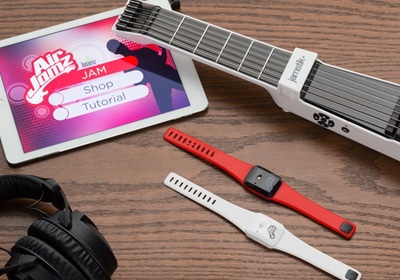 The music application and device creator, Zivix, is utilizing crowdfunding to push its products online and onto physical retail shelves.
April 28, 2016

In late March 2015, digital music innovator Zivix launched what stands today as the third most-funded Minnesota-based Kickstarter in history. Its product—the Jamstik+, a wireless guitar no larger than a ukulele that teaches its user how to play while on the go—attracted nearly 3,000 backers who contributed more than $813,000.

One year later, Golden Valley-based Zivix is attempting to recreate the success of the Jamstik+ with a new Kickstarter campaign for AirJamz, which landed on the popular crowdfunding platform last week. Supporters immediately flocked to Zivix’s latest venture, a smartwatch-esque wearable that pairs with Apple and Android devices to create the “most realistic” air guitar experience to date. In less than a week, the project has drawn in more than $23,000—well over two-thirds of its $30,000 goal.

Zivix CEO Ed Cannon told TCB the company has historically benefited from both private investors and crowdfunding efforts, but chose to return to Kickstarter with AirJamz for several reasons.

“You need investors to fund recruiting of the base team and initial product research and development and to provide necessary capital for manufacturing and inventory,” Cannon said. “[But] crowdfunding provides the critical feedback and a discounted purchase to the user,” which ramps up sales and guarantees a significant number of shipments at product launch.

Cannon said Amazon has already asked the company for an exclusivity agreement for its AirJamz system, which won’t wrap its Kickstarter campaign until May 18. And looking beyond its period of exclusivity with Amazon, Cannon said he hopes to push AirJamz onto the shelves of brick-and-mortar retailers.

“We would love to more fully engage with one or both of the most recognized leaders of retail located in the Twin Cities for our products,” Cannon said of Target and Best Buy. “We believe it would be mutually beneficial.”

Zivix capably jumped the online to physical retail hurdle in the past with its Jamstik+ and PUC+, a device that wireless connects digital instruments to Apple and Android devices. (Both devices are now sold in a number of music stores around the nation, as well as hundreds of Apple and Brookstone stores.)

Zivix says it could return to Kickstarter as more its products hit the manufacturing phase of production, but for now those plans remain hush-hush.

“We have a couple [more product ideas] we have been working on for some time that we are still keeping under wraps,” Cannon said. While admitting Zivix’s mission may be “lofty,” he hopes its Jamstik+, AirJamz, PUC+ and future products will “become an important solution for music educators across the world” as the company’s product line and reputation grows.