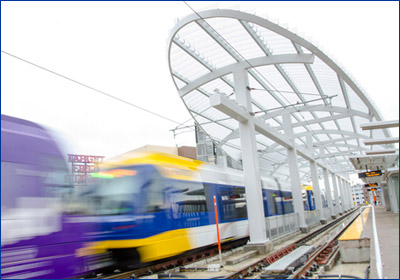 Digging Into The Claims About Green Line LRT Development

It's true the light-rail line is attracting green, but Metropolitan Council numbers are off-track.
By Burl Gilyard
July 01, 2014

Development dollars follow transit. But adding up investments related to the new $957 million Central Corridor light rail transit line is not an exact science. In mid-May the Metropolitan Council touted $2.52 billion of past, future and in-progress development within a half-mile on either side of the Green Line. That report—and the news coverage about it—stretched matters, to say the least.

As TCB first reported in May, nearly half of that tally—$1.17 billion—pertains to projects in downtown Minneapolis, west of the Green Line connection to the existing Hiawatha light rail line. This includes $501 million for the Downtown East redevelopment and a related hotel/apartment project being developed by Minneapolis-based Ryan Cos. US Inc.

All of the projects listed by the Met Council in St. Paul total about $900 million. While the Met Council sought to spotlight private investment, the list includes the $243 million publicly funded overhaul of Union Depot. The tally also counts two downtown St. Paul apartment projects that St. Paul taxpayers helped finance after private developers could not move the deals forward.

The sale of a commercial building is usually a routine piece of business. But in a few cases the Met Council has counted the price of a straightforward building sale (such as the $51 million sale of Kellogg Square) as new development investment, which is not the same thing. The Met Council also tallied expansion projects for downtown St. Paul cultural organizations that arguably would have been done without light rail.

One project on the Met Council list is the expansion of the Rihm Kenilworth truck dealership along University Avenue in St. Paul. Owner Kari Rihm says that she gave up on plans to redevelop the site after determining that it would not be financially feasible. And, she adds: “The LRT doesn’t really have an effect on our business at all. It hasn’t interfered with our business, but it hasn’t enhanced it either.”

Metropolitan Council spokesman John Welbes says that its tally of deals was compiled over time, specific project details are subject to change and the Met Council is not claiming that projects are necessarily a direct result of the light rail; rather, the council was trying to give a sense of overall project activity along the line.

The Green Line number-crunching prompted numerous news reports saying the light rail helped attract at least $2.5 billion in development, but no project-by-project analysis of how the Met Council arrived at its ultimate tally.

One project on the list, the Crane Ordway apartments in downtown St. Paul, opened back in 2006—eight years before the arrival of the line. Other projects on the list have also been open for some time, including Sydney Hall and Mill District City Apartments in Minneapolis (both opened in 2010), and Frogtown Square and the Renaissance Box in St. Paul (both opened in 2011).

Even so, the Met Council tally could have been larger. The list did not include cost estimates for 43 of the 121 listed projects, and new development along the Green Line is expected to unfold over many years.

Although the Met Council calculations include some projects with public funding, the goal was to gauge private investment along the line. Given that, the Met Council count doesn’t include Target Field, TCF Bank Stadium, planned renovations to Target Center and the under-construction Lowertown ballpark and Vikings stadium projects. Combined, they would have added about $2 billion to the total.

George Sherman, owner of Minneapolis-based Sherman Associates, has several projects tallied on the list, including Rayette Lofts and West Side Flats in downtown St. Paul. “I think we are bullish on the rail,” says Sherman, but, he adds: “We would have done those investments in downtown St. Paul without the light rail.”

Sherman’s rehab of the 1970s-era Riverside Plaza in Minneapolis is on the Met Council’s list, but does not have a listed cost. It was no small project: Sherman put the budget at $160 million.

Veteran developer Jim Stanton of Coon Rapids-based Shamrock Development wrapped up his new Stonebridge Lofts, a 164-unit condo building, near the Guthrie Theater in Minneapolis, this spring. The Met Council has the project on its list twice, listing it a second time under its previous name, Park Vista.

Was light rail a factor in building the condo project?

“No, it wasn’t,” says Stanton bluntly. “It might be handy, but I didn’t base any decision on that particular thing.”