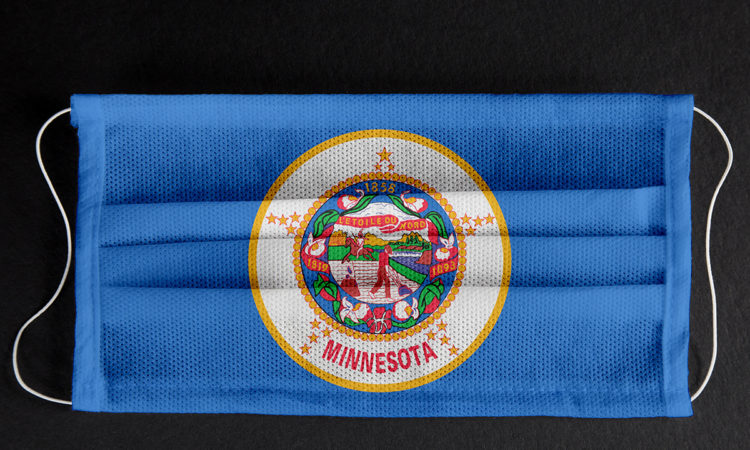 Though Minnesota and Wisconsin took different approaches to combatting Covid-19, their death rates are comparable. What happened?
By Greta Kaul
February 06, 2021

Minnesotans who have watched the bar scene across the border from the Twin Cities in Hudson, Wisconsin remain relatively lively during parts of the Covid-19 pandemic when their own state’s watering holes were closed might be wondering: Why are the Covid-19 death rates in Minnesota and Wisconsin so similar?

As of Thursday, Wisconsin had recorded 6,549 deaths due to Covid-19, compared to 6,319 deaths in Minnesota. When you adjust that for the size of the two states’ populations (Wisconsin is slightly larger), the rates work out to 112 Covid-19 deaths per 100,000 residents in both states.

Throughout much of the pandemic, many Minnesotans have perceived the public health restrictions in Wisconsin to be more lax than their own state’s: whereas Minnesota Gov. Tim Walz implemented a statewide stay-at-home order early on and another “pause” that closed some businesses in the fall, his counterpart, Tony Evers, in Wisconsin, saw some of his similar efforts struck down by the state’s courts, leading to more of a patchwork of local restrictions on some public health measures in lieu of statewide ones.

Is it just a matter of Wisconsin undercounting its deaths?  If Minnesota were testing for Covid-19 more aggressively than Wisconsin, it could make Minnesota’s death rate appear higher.

That doesn’t seem likely in this case, said Dr. Dimitri Drekonja, an associate professor of medicine in the University of Minnesota’s Division of Infectious Diseases and International Medicine.

“Those are not hugely different,” Drekonja said. “You kind of expect that from two states that have similar populations, similar cultural norms.”

An analysis from the Star Tribune this week on Minnesota’s excess mortalities found that the increase in deaths in 2020 over 2019 was overwhelmingly caused by Covid-19, with a smaller increase in deaths due to overdoses. While there’s been some speculation that social isolation during Covid-19 might cause a rise in suicides, that number was flat.

How different are the states’ restrictions, really?

While the perception in Minnesota has often been that Wisconsin’s Covid-19 restrictions have been looser than its own, is that actually the case?

Wisconsin, like Minnesota, has had a statewide mask mandate. This week, after the state’s legislature voted to repeal it, Evers issued another one.

In terms of how the states stack up otherwise, in November, as the pandemic spun out of control in the upper Midwest, the New York Times used research from Oxford University to rank the strictness of states’ response to Covid-19.

But all the focus on the state response ignores what’s going on at the local level and residents’ behavior, said Oguzhan Alagoz, a University of Wisconsin professor who has studied Wisconsin’s public health response.

Wisconsin may not have had orders as restrictive at the state level, but its most populous counties, Milwaukee and Dane (the latter home to Madison) had their own public health measures designed to decrease gatherings that could transmit Covid-19. Not only that, but people have by-and-large followed them, Alagoz said.

Even if statewide social distancing measures were stricter in Minnesota for stretches of the pandemic, it’s much harder for the state to enforce guidelines around private gatherings in people’s homes: Minnesota discouraged them, but they definitely still happened.

“If you look at the mobility data, it is probably much higher adherence to social distancing than many of the places in Minnesota,” he said.

“What people don’t seem to realize is a lot of it is not really ‘what are the official rules on the book,’ it’s ‘what are people doing on the ground,’” he said. “If you ask me, if I drive through a small rural town in Minnesota and a small rural town in Wisconsin, it would be pretty difficult if you weren’t looking at the license plates or the weirdly horizontal stoplights in Wisconsin to tell you were in a different state.”

In Minnesota, he’s noticed a difference in the Twin Cities metro versus farther away in traveling for his kids’ ski competitions.

“Hyland Hills in Bloomington, almost everyone is wearing a mask,” he said.

That’s less the case the further you go from the cities, he’s observed. “Yes they have signs up saying wear a mask, the official policy is you should be masked to ride a lift, but no one says a thing,” he said.

When medical researchers study interventions, they talk not just about what the intervention does, but what its uptake is, Drekonja said; how many people have adopted it. You can compare policies that seem different, but if people are behaving similarly regardless of policy, you can’t be too shocked to see similar results.

If you’re looking to compare Minnesota and Wisconsin, too, for that matter, to states with fewer restrictions, a better comparison might be the Dakotas, Alagoz said; states that were much more hesitant to enact Covid-19 restrictions at the state or local level.

But even that’s simplistic. People want to think of these situations as black and white, and they aren’t, Alagoz said. It’s really tough to draw a line between state policies and death counts clearly, because every state has its own unique features, Alagoz said.

“When you have more urban areas, more mass transportation, the effect of social distancing there is going to be much different than when you enact it in a rural area,” Alagoz said.

All the metro-rural and state-to-state differences are generalizations to some degree: many residents of small towns in both Minnesota and Wisconsin are following social distancing measures, and if you had visited Rapid City, South Dakota in September, as this reporter did, you would have found many people wearing masks, and some not.

“This is why it’s very simplistic to basically say this is a binary one or zero, either we shut down or do not shut down. We have all these gray zones,” Alagoz said.