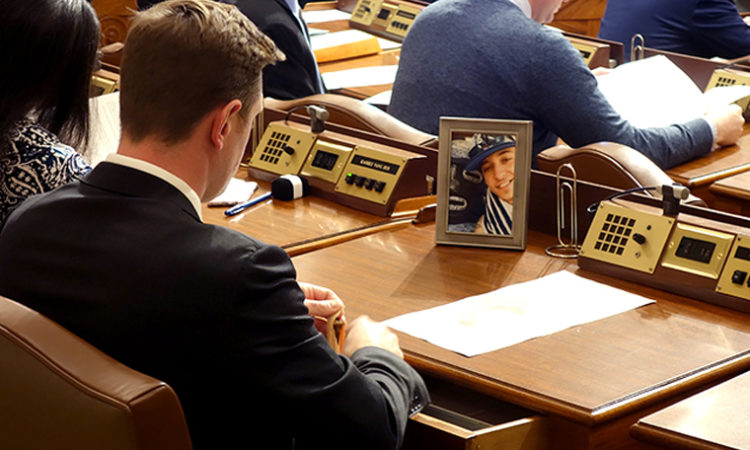 Alec Smith’s parents were on hand at the Minnesota Capitol earlier this week to tell his story one more time, part of an effort to pass a package of bills to stop price gouging and bring some transparency to the insulin market.
January 23, 2019

It was two months after their son died in 2017 that Nicole Smith-Holt and James Holt, Jr. first told his story to a reporter.

A television station in Rochester was doing a piece on the unaffordability of insulin for diabetics like their son, Alec Smith. The couple related how Alec, who was working as a restaurant manager and had hopes of opening his own restaurant one day, died in his Minneapolis apartment from ketoacidosis after rationing his insulin.

When he turned 26, Alec was no longer covered by Nicole’s health insurance and did not have enough in the bank to cover his next prescription for insulin and supplies, which by then cost him $1,300 a month. His salary at the time was $35,000 a year, which was too much to qualify for state medical assistance but not enough to allow him to find a policy on the individual market he could afford.

After that first TV interview, Nicole Smith Holt says, Alec’s story has taken on a life of its own. “It’s traveled all around the world,” she said. “His story has become the face of the insulin affordability issue.”

The couple was on hand at the Minnesota Capitol Tuesday to tell Alec’s story one more time, part of an effort to pass four bills at the Legislature aimed at bringing price transparency and anti-gouging regulation to the insulin market.

In recent months, Alec’s parents have appeared whenever asked, including at a roundtable discussion of the issue in December sponsored by Sen. Matt Little, DFL-Lakeville. And during the 2018 campaign, they stood with DFL candidates Erin Murphy and Keith Ellison when both made the issue part of their platforms.

That story has resonated, both with elected officials and the public. After being sworn in earlier this month, Ellison began his remarks by saying, “Let me tell you about Alec Smith,” and Alec was also the centerpiece of a Washington Post Magazine cover story titled “Insulin Shock: What Happens When a Lifesaving Drug Becomes Intolerably Expensive.” His story was even featured on the fact-checking website Snopes. “Did Alex [sic] Smith Die At Age 26 Because He Couldn’t Afford Insulin?” Snopes’ verdict: “True.”

The problem with insulin

The price of insulin, the only product that keeps diabetics alive, has jumped 585 percent over the past 14 years, Little said Tuesday. That represents an increase for one-month’s supply from $170 to $1,400, prices that are not justified given the fact that makers didn’t invest in research and development for the product and don’t advertise, said Little.

Part of the problem is that only three manufacturers make most of the insulin in the U.S. and all have been able to prevent the substance from being available to generic manufacturers by slightly changing its formula over the years, a wrinkle in U.S. patent law that isn’t the case in Europe, where diabetics do have access to the lower-cost generic versions. 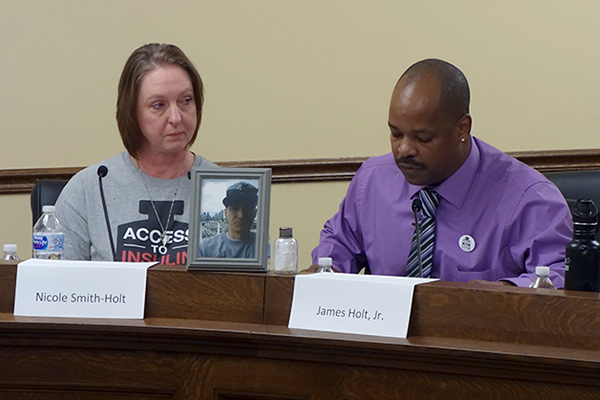 James Holt, Jr. speaking during a roundtable discussion in December sponsored by Sen. Matt Little. A picture of their son, Alex Smith, is on the dais. (Photo by Peter Callaghan/MinnPost)

There is also an issue with the practices of pharmacy benefit managers, the companies that work for insurance companies to negotiate prices with drug makers. To compete for business, drug makers often publish high list prices and then offer discounts to the benefit managers. While those with insurance pay the discounted price, those without are often made to pay the artificially high list price.

Insurance companies have also changed the type and brand of insulin on their preferred lists, requiring doctors to reissue prescriptions and patients to risk not having prescriptions filled after such changes occur.

Nick McGee, the director of public affairs for PhRMA, the association that represents pharmaceutical companies, said the companies are willing to work with legislators “on solutions that enhance the competitive marketplace, lower costs for patients and promote continued medical innovation.”

But McGee said the concerns raised at the Legislature “misrepresents the dynamics” of the marketplace, specific regarding discounts and rebates. “These dynamics can actually lower the net price of insulin by 70 percent or more. Unfortunately, patients often aren’t benefiting directly because the price they pay at the pharmacy – set by their insurer – isn’t tied to the discounted price,” McGee said.

Making sure ‘it doesn’t happen to anyone else’

Each day when he sits at his desk at the back of the House of Representatives chamber, newly elected DFL Rep. Michael Howard thinks about Alec Smith. Alec’s parents are constituents of the Richfield-based lawmaker, and Howard keeps a photo of Alec on his desk.

“They have such a powerful and heartbreaking story and they keep telling it,” Howard said of Nicole Smith-Holt and James Holt, Jr. “That’s what I’m so impressed about is they will tell Alec’s story to anyone who will listen in the hopes that they can affect and drive some change and make sure it doesn’t happen to anyone else.”

Howard said he got to know Alec’s parents while working on the Murphy campaign. Once he was elected in November, he said he asked if they would be comfortable with having his photograph on his desk, so “I could remind myself of the importance but also, generate conversations with my colleagues. I’ve already had several ask, ‘Who’s on your desk?’ It sparks a conversation … and hopefully drive the Legislature to take action this year.”

Howard is the prime sponsor of what he is calling the “Alec Smith Emergency Insulin Act.” It would set up a program under which diabetics unable to afford insulin could get prescriptions filled on an emergency basis. Pharmacies could get reimbursed from a fund filled with some type of fee assessed to drug makers, similar to the proposals to tap opioid makers for the ill-effects of addiction. Howard said the fees are a way to hold drug makers accountable and require them to share in the solution.

“Never again. Never again should someone lose their life simply because they can’t afford the insulin they need to survive,” Howard said. 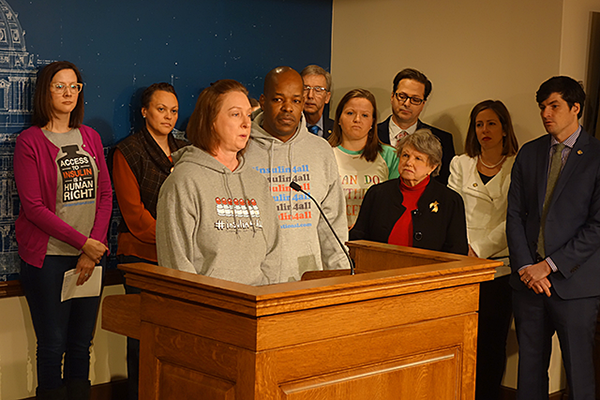 Other measures being introduced would require the reporting of prices charged by insulin makers and pharmacies and justifications for price increases; make insurance companies disclose the brands of insulin their plans cover; and bar insurance companies from pulling coverage of any type of product during an insurance plan year. (The bills are filed as Senate File 366 , SF 365,  and House File 288.)

Perhaps the most-sweeping proposal, part of another bill, SF 364, would empower the state Department of Health to collect and analyze pricing data and determine reasonable prices. The department could then cap prices at levels it determines provide reasonable profits while keeping a lid on increases.

PhARMA’s McGee said the organization was troubled by the price caps measure. “We believe ideas like giving the government broad authority to set prices aren’t the right solution and would be harmful to innovation and patients’ access,” he said. “Instead, insurers should share more of the discounts they receive directly with patients. Providing access to discounted prices at the point of sale could dramatically lower patients’ out-of-pocket costs.”

In addition to legislative action, the state of Minnesota filed a federal lawsuit late last year against the three big producers of insulin — Sanofi-Aventis, Novo Nordisk and Eli Lilly — challenging the rebate and discount system that the state claims inflates the cost of insulin and increases profits for both the drug makers and pharmacy benefit managers. The suit, filed in New Jersey, was initiated by former Attorney General Lori Swanson but will be continued by Ellison.

The bills have bipartisan support, including two key Republicans in the Senate, where the GOP currently has a two-vote majority: Sen. Scott Jensen, R-Chaska, and Sen. Jim Abeler, R-Anoka, who is a chiropractor.

Jensen said Senate Republicans are open to the discussion, but he acknowledged that there are members of the caucus who oppose additional regulation. “That’s the big one I’m hearing,” he said.

As Little noted Tuesday,“Anytime you are limiting someone’s ability to make money, there appears to be political problems. Yes, they’re going to fight this, but that’s why we’re here because it just doesn’t seem like they care about people with diabetes.”

Said Howard: “I fully expect there will be some headwinds from folks who say, ‘Wait a minute, this is too complicated. But make no mistake, that complexity works to the advantage of those with a vested interest in maintaining the status quo, those making huge profits while Minnesotans suffer.”

Jensen, a family doctor for 35 years, praised those with diabetes for raising awareness of the cost crisis around insulin. “We all owe a debt of gratitude to all the people here today because they’re trying to shine a bright light on something that needs to be addressed,” he said at Tuesday’s press conference.

Yet Jensen notes that the problems with drug pricing go far beyond insulin. Drug prices have grown from less than 10 percent of health care expenditures to almost 30 percent over two decades, while hospital cost share has dropped from 34 percent to 17 percent.

“Health care is an enormous parasite that has an appetite that won’t be quenched,” Jensen said. “The spotlight on insulin will simply serve to spotlight the fact that we have to put a spotlight on pharmacy in general. It’s insulin today, but on a broader market we have to look at the entire industry of pharmacy.”

One of those trying to raise awareness on Tuesday was Concordia University student Alexis Stanley, whose mother has turned down advancement because she fears losing her current insurance that covers Stanley’s insulin and supplies.

Stanley said she worries about the time when she, like Alec Smith, will be too old to be covered by that policy. “I’d like to make a difference,” the 19-year-old said, “but I can’t do that if I’m dead. This disease is real. None of us asked for it. So why is our life their profit?”