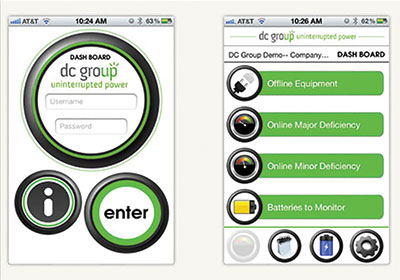 The company fuels the energy behind power supply systems and is on a steady growth trajectory.
May 02, 2014

1. Do it right. Take the time to perfect what you do. Fix any internal ruptures early on, before even thinking about expanding. “I’ve seen many companies have this diabolical, we’re-going-to-conquer-the-world strategy. They might do it for a couple of years, but they don’t have the infrastructure,” Frank says. Trying to go too big, too fast can lead to collapse.

2. Listen to the customer. Look at their needs and identify where service is lacking or could be improved. What do they want to make their jobs and lives easier?

3. Be unique. Offer them something they’ve never seen before, whether it’s a product or a service. Show them that your company is indispensable.

Jon Frank considers himself a maverick. His company, DC Group, has been growing almost nonstop since he conducted a major overhaul of the way it does business. It wasn’t an obvious step at the time, but it was the right one.

DC Group services uninterruptible power supply (UPS) systems for critical industries like hospitals and major data centers. If everything runs right, you’ll never even know they’re there. But whenever there’s a flux in the main power, the UPS kicks in. That can happen 50 to 100 times every day. It’s a safeguard to ensure medical devices are powered to save lives and that Facebook stays online to save your social life.

Founded in 1991 by Frank and his father, the Minneapolis-based DC Group started out working for the manufacturers of these power supply systems. About a decade ago, Frank decided things could be better.

“In the industrial area, it’s really black and white; you get what you pay for. There was no salesmanship to raise the bar on customer service,” he says. So he switched gears and instead of working for the manufacturer, he started working for the customer. By sitting down with clients and finding out exactly what they needed—and wanted—to make their jobs easier, Frank discovered the gap in the market.

He retooled DC Group and steered it to grow into that gap. He added a sales department and he standardized operations internally by going totally digital. He then created D-tech, a mobile app that allows site managers to access an online database of service reports (replacing the file cabinets filled with paper reports), to see real-time diagnostics and to keep track of inventory.

The “bells and whistles” were key to attracting and keeping clients—who until then had also only worked with manufacturers and, despite a desire to modernize, were wary of an independent servicer. He countered their apprehension: “Well, if we weren’t any good, the manufacturer wouldn’t use us.”

Eventually, he won them over. DC’s clientele includes Fortune 500 companies, hospitals and government entities. The company has been on Inc.’s Fast 500/5,000 list six times and has plans to grow more. In 2008, during the transition, DC took in $7.3 million in revenue and had 59 employees. In 2013, it had grown 325 percent, with $31 million in revenue and an employee pool of 175 nationwide.

Frank will tell you that the secret to managing growth is to go with your gut. Though he didn’t chart a long-term strategy, he spent a considerable amount of time building and perfecting the company’s infrastructure. Growth wasn’t the endgame, he says; providing a top-notch service experience and cementing a good reputation in the industry was.

“I put quality before growth,” he says. “It is important to me that things are done right. . . . I’d rather have integrity, and if that means not getting the figure we had in mind, then that’s what it means.”

Once he felt DC was properly equipped, he took a few calculated risks. Instead of expanding with smaller, more local businesses, he went after enterprise companies that operate nationwide—companies like Google, AT&T and Microsoft. In so doing, he could also offer them centralized control under one contract for a discounted price. Soon he had clients and technicians everywhere.

“We’re the backbone of the technology industry,” Frank says. “We’re giving it its juice, making sure it’s protected and that it runs. People don’t know the gravity of what we do.”

Not bad for a company built out of a once-condemned building.