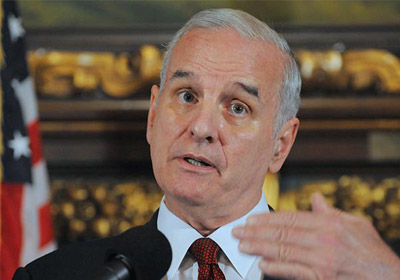 The $14 million provision included in Governor Mark Dayton’s budget funds the equivalent of about 218 full-time employees in the Department of Human Services.
April 12, 2014

Disability and long-term care advocates were triumphant at the Capitol Monday, as the DFL-controlled Legislature and Governor Mark Dayton agreed to support calls for a long-needed 5 percent boost in their funding.

The agreement was a breakthrough in health and human services budget negotiations this session, but the increase has also left little wiggle room for other spending priorities in that arena this year, exposing fracturing priorities between the Legislature and the governor.

The deal means an additional $84 million will be spent this year to boost the paychecks of people providing long-term care and care for the disabled in community-based settings rather than nursing homes. Advocates of the of the so-called 5 percent campaign said the increase would help cut back on turnover in those jobs and give workers the same raise that nursing home staff saw in the 2013 budget proposal.

Legislators are debating how to spend a $1.2 billion budget surplus this year. About half of the surplus has already been spent on tax cuts and cushioning the state’s rainy-day budget reserves.

Steve Larson, senior policy director at The Arc Minnesota and a lead advocate of the funding increase, said the movement was the result of months of pressure. The group held multiple Capitol rallies and enlisted a bipartisan group of more than 100 legislators to sponsor the proposal. Legislators have been seen all session sporting buttons with the number five to represent support for the campaign.

“The pressure was put on and it worked,” Larson said. “There has been continued momentum all year and we felt pretty confident we were going to get lawmakers on board in some way.”

There wasn’t agreement from the start. Initial budget bills from House Democrats and Dayton only funded the campaign at about 4 percent, arguing the group got a 1 percent increase in their budget last year, bringing them to the full 5 percent. But advocates argued the effort this year was separate from last year’s action.

“Leadership just decided they wanted to go with the 5 percent so they could be treated equally with nursing homes,” said DFL Representative Tom Huntley, chair of the House Health and Human Services Finance Committee. “I think they are underpaid to start with, even after the 5 percent. They could make more money at Wal-Mart in a lot of cases than they could doing this really tough work.”

But the proceedings of the day also revealed a potential bargaining chip for legislative Democrats in health and human services negotiations with Dayton’s administration.

Both the House and the Senate left out a so-called “supplemental salary” provision in their budgets. The $14 million provision included in Dayton’s budget funds the equivalent of about 218 full-time employees in the Department of Human Services (DHS), according to a March 26 letter from DHS Commissioner Lucinda Jesson.

Most of those workers are employed in in mental health services and at the Minnesota Sex Offender Program (MSOP).  The two legislative budget bills also leave out about $3 million in funding to help pay for U.S. federal Judge Donovan Frank’s effort to review civil commitment cases at MSOP as part of a class-action lawsuit.

“We are going in there with a bargaining position,” Huntley said.

Jesson has urged Huntley to reconsider the position. “Because of the large number of [full-time equivalent] reductions, DHS would have to consider program closures to reduce spending,” Jesson wrote in the letter, noting that could mean closing all Community Behavioral Health Hospitals, the Child Adolescent Behavioral Health Services program and all Intensive Residential Treatment Services facilities.

“There’s not enough money in the bill to do everything. I’d be shocked if we go home laying off over 200 state employees, either in sex offender programs or anywhere in the state,” GOP Representative Jim Abeler, the former chair of the House Health and Human Services Committee, said. “Did you ever think we’d see the day that [state union jobs] would be used as a bargaining chip by Democrats?”

Senate Health and Human Services Division Chairman Tony Lourey said their bill simply reflects diverging priorities between the Legislature and the governor. The Senate is also calling for an additional increase in funding for nursing homes at risk of closure. That provision is not in the House or the governor’s proposal.

“I think that the administration has ways of working with us to help accommodate their needs,” Lourey said. “I consider it a three-way negotiation. It has to pass the House and it has to pass the Senate, but it has to be signed by the governor. I consider all three proposals are in play.”