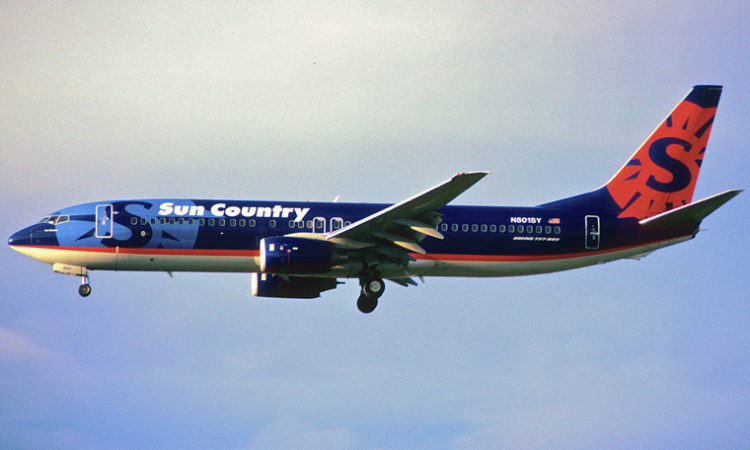 Apollo Global Management, which has never owned an airline in its nearly three decades of operation, will be acquiring Sun Country for an undisclosed sum.
By Sam Schaust
December 14, 2017

The Davis family, who in 2011 purchased Sun Country Airlines for $34 million, announced on Thursday that a deal had been reached to sell the carrier to a New York-based investment firm.

Apollo Global Management has agreed to buy the Eagan-based airline for an undisclosed sum. The deal reportedly has been in the works for months, according to the Star Tribune.

Marty Davis, who has co-owned Sun Country along with his brother Mitch Davis, told the Star Tribune they had been looking to sell the carrier to someone who could help it flourish. “It’s been a good journey,” he said, “but the airline needs to grow and it needs a hands-on operator.”

The deal for Sun Country, which is expected to close in the next few months, is not expected to displace the carrier from its Minnesota home. Jude Bricker, who took over as CEO of the airline last July, will also keep his position once the acquisition is completed, Apollo said.

“I look forward to working with Apollo to further enhance and grow Sun Country’s business,” Bricker said in a statement.

Apollo has never owned an airline in its 27 years of operation. The firm deals in a variety of markets with its largest focus being the leisure industry. Among its major investments are in the AMC Entertainment movie theatre chain, Charter Communications, Harrah’s Entertainment casino line, and the Norwegian Cruise Lines.

“Sun Country presents compelling opportunities for innovation, efficiency and growth,” said Antoine Manfakh, partner at Apollo, in a statement. “We look forward to supporting CEO Jude Bricker in delivering the next chapter of Sun Country’s growth.”

Since taking over this summer, Bricker has made several significant changes to the airline, namely the addition of carry-on bag fees and upping the number of seats it offers on its Boeing 737 planes. Those changes brought Sun Country, which services approximately 2.5 million customers annually, closer in line to the no-frills model used by its discount carrier competition, such as Frontier and Spirit airlines.

Yet, in August, Marty Davis said that Sun Country had no intention of taking on the feel of an ultralow-cost carrier. “We don’t want to nickel and dime customers,” he said. “We want to stabilize [the company] for long-term growth by finding the right rhythm between our pricing and customer service.”

In a sign of support, Sun Country's pilots said the acquisition should help the airline in the long-term. Captain Brian Roseen, chairman of the Sun Country Airlines Master Executive Council (MEC) of the Air Line Pilots Association, told TCB: “We support management's desire to increase the Sun Country fleet and provide new jobs and opportunities for our pilots.”

Roseen continued to say he was eager to know more about the new owner's plans for Sun Country.

In a prepared remarks, Marty Davis said the decision to sell to Apollo was attributable to its track record of building companies up for long-term growth. “With Jude at the helm, along with the dedicated employees who make Sun Country what it is today,” he said, “we are confident the company is well-positioned for continued expansion and its evolution beyond its Minnesota base.”