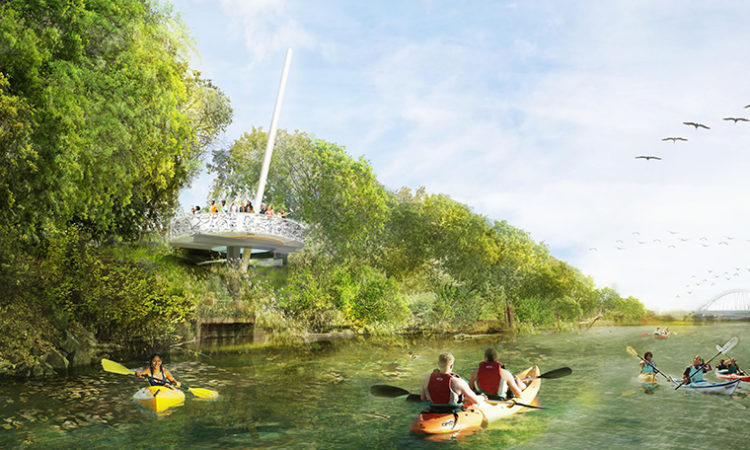 An artist's rendering of the Great Northern Gateway Overlook

The RiverFirst Campaign from the Minneapolis Parks Foundation has raised $16.7 million towards its goal of $17.9 million to create “transformative parks” on the city’s upper Mississippi riverfront. That brings the campaign, launched in 2015, to 93 percent of its goal.

To date, the campaign’s development efforts have been mostly under the radar, largely targeting higher net worth donors. But now the foundation is inviting anyone in the community to contribute. The Richard M. Schulze Family Foundation is providing a matching grant of $250,000 to RiverFirst; the foundation will match gifts until the total reaches $250,000 before Dec. 31. Schulze was the founder and longtime CEO of Richfield-based Fortune 500 electronics retailer Best Buy Co. Inc.

On Tuesday, the Minneapolis Parks Foundation and the Minneapolis Park and Recreation Board shared updated images of the Great Northern Gateway Overlook to give a more detailed sense of the plans. The new overlook will be located at the east end of 26th Avenue North. The overlook is designed to “perch like a nest above the riverbank” and will include a 50-foot tall beacon.

RiverFirst funds will go towards the overlook and the Water Works project near St. Anthony Falls and the Stone Arch Bridge. The Water Works plan will include a park pavilion with a restaurant, restored historic mill remnants and a gathering/performance space.

The Water Works project has a budget of $29.9 million; of that total, $16.4 million will come from private contributions through the campaign. The Great Northern Greenway Overlook is slated to cost $4.5 million with $1.5 million of the budget being drawn from the campaign.

Both projects are expected to break ground yet this year.

The General Mills Foundation kicked off the campaign in January 2016 with its $3 million gift, contributed in honor of the company’s 150th anniversary Minneapolis riverfront.

Charlotte, N.C.-based Bank of America Corp. opened its first Minnesota branches in 2015 and continues to expand its presence here. The Bank of America gift was announced in November 2018.

The Pohlad Family Foundation is also listed among contributors who donated $1 million or more to the campaign.