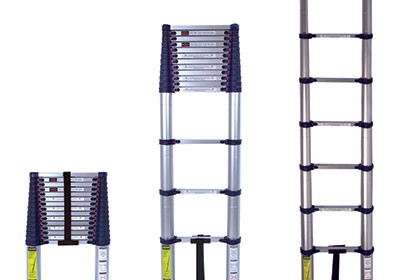 Its revenue jumped after it was able to persuade Sherwin-Williams to take its telescoping ladder.
April 03, 2014

When you think of Sherwin-Williams you think paint, not ladders. But Mitch Kieffer, CEO of Minneapolis-based Core Distribution, makers of the Xtend+Climb Telescoping Ladder and other hardware products, thought the company should extend its thinking. So after much persistence he got himself a meeting with buyers at corporate headquarters in Cleveland. The timing turned out to be perfect.

“We approached them for five or six years and never got anywhere, but when we finally got in front of them, they really got behind what we were offering,” says Kieffer, a personable and talkative presence. “We created a rack near their register, and developed four products for them. It made sense for them. They’re a paint store. Most of their focus is in back of the store, not at the front near the register. We gave them that, and it was a big hit for them. We did four times the business that was projected, and now have 18 different rep groups around the country for coverage of Sherwin-Williams.”

The company today sells a variety of patented products that serve primarily home needs, from ladders to stools and walkers. It imports the products from China and Israel, and ships them to a warehouse in Inglewood, Calif., for domestic fulfillment. The Xtend+Climb Ladder is its top performer, accounting for the bulk of the company’s approximately $25 million in annual revenue.

It all started with one SKU, and a home office in Kieffer’s carriage house near Lake Calhoun. “I spent 18 months developing the telescoping ladder and literally knocking on doors doing presentations.”

He caught his first break locally with Ace Hardware, which he pitched store by store, here in Minnesota. When enough stores accepted the product, the corporate parent started paying the invoices. For Kieffer, who has an MBA from Columbia and was handling the administrative side through QuickBooks, that was a big relief. “That was our first experience with corporate sales and a big break.”

As Kieffer went around making his presentations, he realized something key about the mindset of buyers: They’re not looking to be a hero. It’s too risky.

So Kieffer settled in to a Rod Carew groove, offering his product at trade shows, refining his demo and promising tidy margins with low exposure to loss. He caught another break, this time with TrueValue, through a trade show in Las Vegas. At that time, all the store owners attended the shows, and Kieffer was ready to dazzle. He put together a video, put it on CD and had a 30-minute loop demonstrating the Xtend+Climb Ladder that could be viewed at the company’s booth. It was a hit.

“We had a terrific show and we sold in to a lot of TrueValue stores. That’s how we got our beachhead to really start selling things,” he says.

In that ramp-up period Kieffer met with a buyer from Home Depot five times, and five times was told no. But he got smart feedback from the rep on design and packaging. Kieffer listened and made adjustments, and today is proud of the flexibility he can offer retailers. “What we did several years later is we shipped it inside the same kind of box but with a stand and a rack, so the store actually sets the rack up in front of the consumer by the register. We could adapt packaging and colors and branding to what the retailer needed.” Home Depot later became a customer.

“We got lucky that we didn’t get the big orders right away. That forced us to go small and do everything ourselves, and that gave us time to refine our business. In retrospect it would have killed us to get into Home Depot right away. The goal is to keep the same SRP [selling retail price] across your distribution, and big retailers want you to sell for cheaper prices. So we got lucky that we were able to grow like we did.”