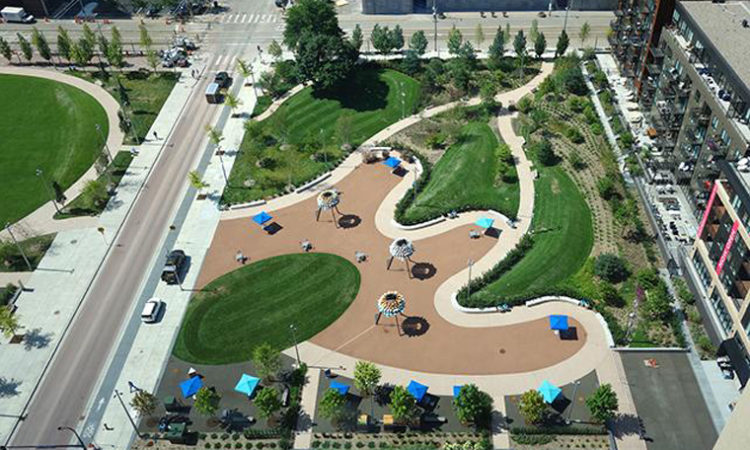 “The vibrancy that we now have on the street which was previously an ocean of surface parking lots is something to most definitely marvel at,” said Council Member Jacob Frey.
By Peter Callaghan
August 04, 2017

When asked to talk about all the development completed, under way or planned in the part of Minneapolis boosters call East Town, longtime developer George Sherman begins with a story about how much the present differs from the past.

It was 30 years ago, Sherman says, when Burlington Northern, through its real estate subsidiary Glacier Park Company, was trying to unload 100 acres of land on the west bank of the Mississippi River. It stretched from what is now the Guthrie Theater to the Plymouth Avenue Bridge.

The price tag? $21 million. But when Sherman tried to persuade the city to buy it he said he had several City Council members reply, “Who’d want to live on the riverfront?” It was voted down. Sherman said he bought the 15 acres he could afford, and over time the area has been redeveloped for condos, apartments and hotels.

But Sherman said the development always stopped at Washington Avenue.

“We saw almost nothing hop over the avenue,” Sherman said last week during a Minneapolis-sponsored event to brag a little about what has happened in the last four years. Sherman is just one of the developers who has already invested — or is in process of investing — $569 million in private money in offices space, retail, apartments and hotels.

Whatever came first, all agree: Area is transformed

While others on the program couldn’t completely agree whether the first domino was the Vikings stadium or the Commons park, they said the resulting effect has transformed the area still called by many Downtown East.

Meeting in a window-walled room on the top floor of one of the two new Wells Fargo buildings, a pair of Minneapolis elected officials and some private developers and promoters gathered for a discussion of redevelopment of the eastern edge of downtown. The location allowed a lot of what they were talking about to be seen.

To the left is U.S. Bank Stadium. Immediately south is the 4.2 acre Commons park. To the right lay the apartments known as Edition. Beneath visitors’ feet is the regional headquarters for 5,000 bank employees. Behind is another office building and a hotel. Beyond those toward the river is a construction site for more new apartments and a Trader Joe’s.

All totaled, the square of land from Chicago Avenue to 5th Avenue S. and from Washington Avenue S. to 5th Street — land that doesn’t include the stadium itself — has seen $569 million in private construction and $91 million investment by government. When built-and-under-construction projects are completed, the city estimates there will be 1.28 million square feet of new office space, 56,000 square feet of retail space, 2,000 parking stalls, 375 units of housing, 347 hotel rooms, two restaurants, one grocery store and four-plus acres of park.

The city estimates that property taxes generated by that development will be $14.1 million in 2018 with $3.5 million going to the city. 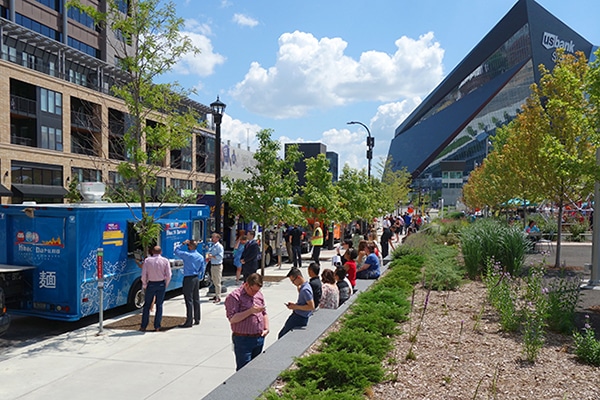 While some demolitions occurred, most notably the former Star Tribune buildings and the Metrodome, much of the new construction replaced surface parking lots that had thwarted the city’s hopes for renewal that began when the previous covered stadium opened in 1982.

It all remains controversial — the $348 million in state money and $150 million in public money for the stadium itself, the city’s $62 million financing of land and design for the park and a share of construction of a parking garage, whether the public or the Vikings benefit most from the park. But it is hard to deny that a lot has happened in the last four years that wouldn’t have happened without the interlinked public and private projects.

“Strap in, we have some things to say about how awesome all of this is,” said Mayor Betsy Hodges. “Minneapolis has a great story to tell, one that few if any other cities can tell: the kind of rapid transformation and dramatic return on investment in the span of our years that is unheard of anywhere else.

“You look out these windows and you try to remember what was here before, namely an unlovely and long unloved landscape that included various buildings that had been abandoned or their owners, like the Star Tribune, that had been looking to relocate for years, and surface parking lots as far as the eye could see.”

Redeveloping it had been talked about for decades with little to show for it, Hodges said. She credited Wells Fargo and developer The Ryan Companies with a plan that not only developed the bank’s buildings but looked at a broader redevelopment plan. That coincided with the state stadium legislation that required a public plaza.

Hodges said a key suggestion was to reorient that plaza from an initial north-south configuration to the east-west layout that was built. The shift created the building sites that became the bank headquarters overlooking the park and created the development partnership that included the city and the Minnesota Sport Facilities Authority.

“What emerged is what you now see,” she said with a sweep of her hand toward the view from the top floor.

Hodges was on the City Council for much of the planning and was mayor for the fundraising and implementation of the Commons design. Sharing the credit was first-term City Council Member Jacob Frey, whose Ward 3 contains the area and who has been the council lead on the Commons since he took office. And while he is one of challengers to Hodges’ re-election, that was set aside for this day.

“The vibrancy that we now have on the street which was previously an ocean of surface parking lots is something to most definitely marvel at,” Frey said. And he touted the mixed-use nature of the plan as a break from the “old model of city planning, which was ‘all right let’s have the entertainment over here, the residential over there and the commercial in a different location.’ “ 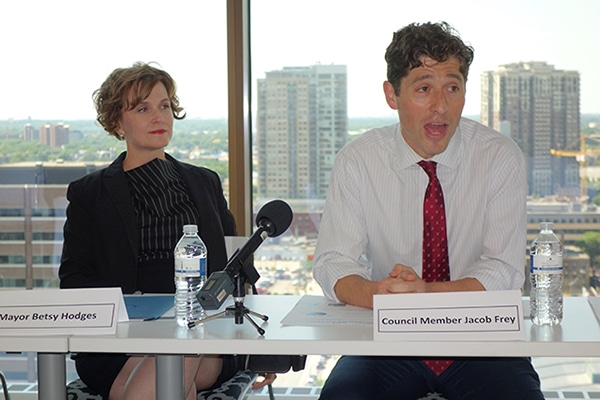 Mayor Betsy Hodges listened as Council Member Jacob Frey touted the mixed-use nature of the plan as a break from the “old model of city planning.” (Photo by Peter Callaghan/MinnPost)

“In Downtown East we said we want all of it,” Frey said. “We want residential, commercial, retail and entertainment all on the same blocks. And we most definitely have done that.” Frey called the estimate of $569 million in private investment as a conservative count that doesn’t include new hotel and condo construction north of Washington Avenue or the planned developments near Hennepin County Medical Center.

“You want to talk about that number, it’s well in advance of a billion,” Frey said.

Back when the area was what Frey termed “a whole lot of dead space,” there were not a lot of people willing to invest. Mike Ryan, an executive with Ryan Companies, said the public investment therefore was a critical element in overcoming reservations. And both Hodges and Frey said they think the private investment shows that the public money was well spent and will be returned to the city in economic activity and taxes.

What about Elliot Park?

Dan Collison has a combination of jobs that might be unique. He is the lead pastor at First Covenant Church and a business development director for the Downtown Council and executive director of the East Town Business Partners. That makes him concerned both with promoting the redevelopment of the area and making sure the it also benefits the people in Elliot Park who lived there before it began accelerating.

“I came downtown to be a pastor at a church that was almost out of business,” Collison said. “It rebirthed by sharing the block with multiple organizations; we have eight nonprofits.” That work is getting a new addition with the affordable housing project called East Town Apartments — 169 units for those at 50 to 60 percent of area median income.

“None of that would have been possible had this investment not taken place,” he said. “But one of the first questions when this type of investment comes is, can those who are here stay here?” Of the estimated 10,000 residents of the larger area, 7,000 were there before the new stadium was built. 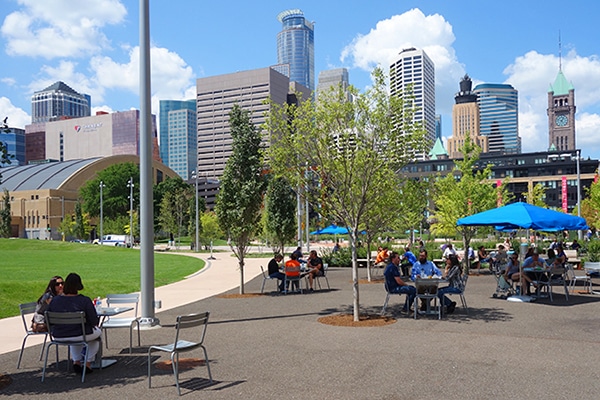 A recent lunch hour at the 4.2 acre Commons park. (Photo by Peter Callaghan/MinnPost)

Collison said the key to avoiding displacement was that parking lots, not occupied buildings, were the locations for much of the work. But there was still work to be done to stitch together Elliot Park, with average incomes of $20,000 to $25,000 a year, and the new residents, with incomes averaging in the $80,000 to $100,000 range.

“I want everyone to know it is benefiting human beings. People can move and bike and walk safely on this side of town because of public and private investment,” Collison said. The people who lived in the area for years “were pleased — a little scared — but pleased to have the stadium and absolutely delighted to see the mixed-use development and the park.”

Sherman, who is in the midst of renovating Thresher Square for a hotel and building on the same block 180 apartments with a Trader Joe’s on the streetfront, said he estimates that the $569 million spent so far is just a quarter of what the broader neighborhood will see over the next 10 years.

The renovated Armory will open in time for the Super Bowl; Thrivent is in the midst of planning to develop two surface parking lots it owns. The city will try again to sell a vacant parcel on Washington now that Mortenson Development has backed out of a hotel project. A lot across the street is in line for another hotel. A mixed-income apartment project is planned for Park Avenue. Ryan will soon announce tenants for a building on what is called Block One, which includes land next to the new stadium parking ramp and the air rights above.

But that momentum not only has proved the early investors right and earned them a nice profit, it has ended the risky period for the area.

“The pioneering for this whole part of town is kind of over,” he said. “From here to the riverfront, those blocks are going to go one block after another.”