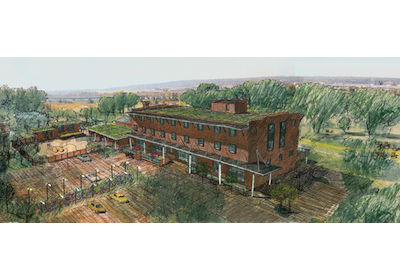 St. Paul resident Tracy Sides received $1 million through a local contest to make her idea of a food, culture, and nature center in St. Paul a reality.

The St. Paul Foundation, a sponsor of the Forever St. Paul Challenge contest, awarded $1 million to fund the “Urban Oasis” project—which will transform existing space at the Bruce Vento Nature Sanctuary in St. Paul. Sides also received $1,000 from the foundation for submitting the winning idea.

Sides envisioned an urban meeting area for her “Food, Nature, and Culture: Build an ‘Urban Oasis’” concept. Her plan for the urban center includes commercial kitchen space for catering companies, food truck owners, and entrepreneurs wanting to introduce their health-conscious products. Additionally, classrooms would be available for community members to learn how to grow, preserve, and cook different foods. Sides also envisioned a worker-owned food-processing cooperative for produce grown locally in gardens and at nearby farms.

“I'm so excited about seeing this idea become a reality because everybody wins—with our ‘Urban Oasis’ food hub and event center we'll create jobs, improve health, and foster a sense of community among people and this uniquely St. Paul place,” Sides said in a statement. “And the city wins because bringing the ‘Urban Oasis’ to life will showcase St. Paul not only as a creative, equitable, thriving, and sustainable city, but also as a national leader in local food system development.”

Forever St. Paul Challenge applicants were asked to come up with an idea to answer the question, “What would you do with $1 million to make St. Paul great?” Approximately 946 ideas were submitted for the contest, which the St. Paul Foundation, in partnership with the Minnesota Idea Open (an initiative which hosts contests for Minnesota residents to develop solutions to important problems), narrowed to 30 semifinalists. An independent panel of nine judges chose three finalist ideas. In August, the contest was opened to public voting to help select the winning idea.

“We are excited to support the winning idea and help it become a reality for St. Paul,” Carleen Rhodes, president and CEO of The St. Paul Foundation, said in a statement. “As a community foundation, we found the Forever St. Paul Challenge to be a fun and different way to connect with the communities we serve. It was inspiring to see individuals and organizations get excited about their ideas and come together to share that enthusiasm and dream big for St. Paul.”

“I commend her for her hard work and the city looks forward to working as a partner to make her project become a reality,” Coleman said in a statement. “The St. Paul Foundation’s Forever St. Paul Challenge brought together our entire community to address critical issues, and I’m thrilled to see community members support a project that aligns perfectly with a community need, vision, and long-term master plans for the park.”

Hahm said the winning idea would draw attention to local, natural resources—such as the Mississippi River—and may lead to other improvements in the area.

“The Bruce Vento Nature Sanctuary has tremendous potential, and I strongly believe that with a lot of hard work, this ‘Urban Oasis’ concept that Tracy has developed can thrive and help shape the way this park looks for decades into the future.”