One Consumer Reports study found that more expensive care doesn’t equate to better care in the Twin Cities; a second study ranked Entira Family Clinic in White Bear Lake as the best provider of care for patients with diabetes and cardiovascular disease.
September 07, 2012 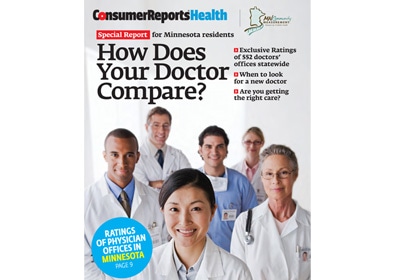 Consumer Reports has released two reports regarding Minnesota health care—one that compares the cost and quality of 18 primary care doctor groups in the Twin Cities, and another that assigns ratings to 552 groups for performance related to diabetes and cardiovascular disease.

For the cost-and-quality study, Consumer Reports used data from Bloomington-based HealthPartners regarding Twin Cities physician groups that participate in the insurer’s network. The data pertains to quality of care, patient satisfaction, and cost, and each of the 18 physician groups received between one and four points for quality and affordability. HealthPartners provided the data for the physician groups, and its costs methodology has been vetted by a group of providers, purchasers, and consumer advocates, according to Consumer Reports.

In a separate but related study, Consumer Reports partnered with nonprofit Minnesota Community Measurement to assign ratings to 552 Minnesota physician groups regarding quality of care for diabetes and cardiovascular disease. (Cost was not a factor in the ratings, and the study was not restricted to those within the HealthPartners network.)

The ratings are based on the percentage of patients who meet goals for managing the two conditions—by controlling blood pressure, cholesterol levels, and blood sugar levels, among other measures.

Of the 37 practices that received Consumer Reports’ highest marks in both the diabetes and cardiovascular disease categories, 11 belong to Park Nicollet, eight to Allina Medical, six to Entira Family Clinics, and three to HealthPartners. While most of the top-performing practices are located in the Twin Cities, some from other parts of the state received high marks, as well. For example, The Mankato Clinic in Mapleton, a southeastern Minnesota city, received high ratings in both categories.

Results of the study appear in a special insert in Consumer Reports magazine, and a digital copy can be downloaded here.

“We are hopeful that Minnesota residents will use these independent findings to help them select physician practices that are the best match for their priorities and needs—and to work with their doctors to improve their quality of care,” John Santa, director of the Consumer Reports Health Ratings Center, said in a statement. “Excellent care does not need to be the most expensive care, and expensive care is not always the best quality.”