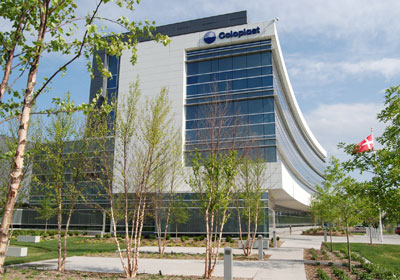 The Coloplast Corporation is a global medical device company based on the other side of the world in Humlebaek, Denmark. But the company’s North American headquarters stand on West River Road in north Minneapolis. Coloplast’s global Urology Care business, which is led out of the Minneapolis office, is a key component of the company’s global growth.

Coloplast acquired the urology business of Mentor Minnesota Inc. in 2006 for $463 million. At the time, the company’s North American headquarters was based in Marietta, Georgia. Although Coloplast weighed options across the country, it ultimately opted to relocate its North American headquarters to Minneapolis. The company invested $33.5 million to build a new campus— completed in 2009—including three connected buildings, anchored by a five-story office tower.

Coloplast currently has 310 employees in Minneapolis and 150 employees in Mankato, where the company produces skin care products. The company has 10,000 employees globally, but is planning to significantly expand by adding another 3,000 staffers.

Company executives are projecting growth for its operations here, but declined to provide an estimate for the number of new jobs in Minneapolis.

“We are looking to significantly enhance our presence here in the U.S. The U.S. is a global growth driver for the overall global business for Coloplast,” said Ed Veome, Coloplast’s North American leader of its Chronic Care division. “We will expect to continue to expand in the headquarters.”

For its fiscal year ending September 30, 2015, Coloplast reported revenue of approximately $2.1 billion. The Urology Care division currently accounts for about 10 percent of the company’s revenue. Coloplast has been posting double-digit sales growth for every year since 2012.

“There has been quite a lot of growth in the urology business since we acquired Mentor in 2006,” said Steffen Hovard, global leader of Urology Care for Coloplast.

The U.S. is also growing market for its products as it looks to expand. “We’ve had very nice growth in the U.S.,” added Hovard.

Veome said that the metro’s history as a “strong med-tech hub” was a key factor in selecting Minneapolis as the North American headquarters because it “gave us access to a deep talent pool.”

In 2014, the company had to pay the city of Minneapolis $600,000 for not hitting job targets at its campus. The city provided financing assistance through tax increment financing for the project. But the company has since added jobs in Minneapolis.

“The company is anticipating continued steady business growth, and along with that, continued employment opportunities and community investments in Minneapolis,” said Hovard.

“We continue to invest in innovation and obviously R&D is a significant part of that,” said Steffen.

What is now Coloplast’s urology group began in Minneapolis in 1969 with the founding of Mentor, which started as a small medical company with four employees. The company relocated its headquarters to California in 1985 following an acquisition. Mentor Minnesota Inc. sold its urology business to Coloplast in 2006. In 2009, what is now Mentor Worldwide was acquired by New Jersey-based Johnson & Johnson, a conglomerate with medical device, pharmaceutical and consumer products divisions.

Hovard said that Coloplast is connected to the local medical business community. Hovard serves on the board of directors for the Golden Valley-based Medical Alley Association, a trade group for Minnesota medical companies.

“We like to be part of and engaged in the communities that we’re in,” said Hovard.