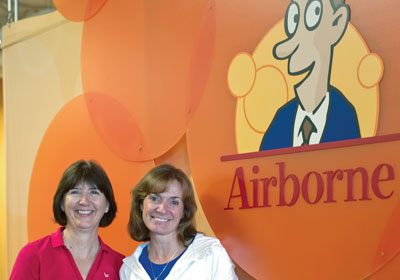 Its legal troubles behind it and new management (and ownership) in place, supplement maker Airborne’s future is no longer up in the air.
August 11, 2010

Then there were the legal issues with state and federal governments—and class-action attorneys—regarding product claims.

Enter Marti Morfitt. As CEO of CNS, the Eden Prairie–based maker of Breathe Right nasal strips, she had turned around another Minnesota maker of over-the-counter health products, positioning it for a successful sale in 2006 to pharmaceutical giant GlaxoSmithKline.

Morfitt hopes to achieve something similar at Airborne, now a Minneapolis-headquartered company with 20 employees and roughly $75 million in sales. “This is a great brand and a great business,” she says. “Its fundamentals are strong; its consumers are loyal and have only good things to say about the business. Retailers love the product because it’s a significant part of that category, it’s profitable, and it turns [over] well.”

Airborne makes a drug-free dietary supplement with 17 vitamins (including A, C, and E) and zinc, ginger, and echinacea. Available in powder form, chewable lozenges, and effervescent tablets, the supplement claims to support the body’s immune system. The products are now available in four fruit flavors.

California teacher Victoria Knight-McDowell developed Airborne’s product in the mid-1990s to protect her health. She and her husband, Rider, led the company to some early success, landing placements at Trader Joe’s, Longs Drugs, and other retailers.

But through the years, Airborne had had a rocky ride. The McDowells sold the company to a private equity firm in 2005, then repurchased it three years later. In 2007, Airborne faced a class-action lawsuit and U.S. Federal Trade Commission charges that it had overstated its product’s health benefits. After settling those claims, Airborne had to deal with the FTC and attorneys general in 32 states concerning its advertising and labeling. That issue was settled at the end of 2008. Airborne says that its legal troubles are now behind it.

“That was really about a company being founded by a schoolteacher and a screenwriter, who had great confidence and energy for the business but a limited understanding of the [Food and Drug Administration] rules,” Morfitt says. “They made some errors that were born of not understanding how the industry works. There was a perception that the product doesn’t work. No. It’s just that the company was talking about the product in a way that was not allowable by the FDA.”

In 2008, Airborne moved to Minnesota to be near its manufacturer, Plymouth-based Amerilab Technologies. The McDowells also hired new management, including several former CNS employees. Morfitt, who cofounded the Minneapolis-headquartered turnaround consulting firm River Rock Partners in 2008, agreed in March 2009 to prescribe some treatments.

After analyzing the company and its business processes, Morfitt believed that Airborne’s most glaring problem was that it had dramatically slashed its marketing budget, which she believed had resulted in a 60 percent plunge in sales over two years.

One of the first moves Morfitt and Airborne’s management made was to focus spending on marketing. The fruits of that effort were a new ad campaign, including a TV commercial. Featuring “Packaging Guy,” the spot showed the Airborne package caricature stepping off the box and interacting with his human “family,” who present various stresses. The ad’s tagline: “It’s good for you when life is not.” The commercial ran nationally on network and cable television during the fall and winter.

With the advertising budget restored, Morfitt and her executive team halted the sales drop; company revenue grew 30 percent in 2009 over 2008. Airborne is now the market leader in the $250 million immune health sector, according to New York–based consumer research firm Nielsen.

With Airborne’s future looking rosier, Morfitt and Airborne CFO Darran Spence lined up its sale in October 2009 to GF Capital Private Equity Fund of New York. Morfitt also invested personally in the company and became its CEO. The McDowells are no longer involved in Airborne.

“We are working toward building this business to its full potential in core business growth and new products,” says Morfitt, pointing to two new items in the pipeline that Airborne expects to be ready for shipment by the summer of 2011. “We’ve built a brand that is about immune support. If we build out that brand with new products, there is significant potential to continue to grow.”

Morfitt rounded out her executive team this spring by hiring Trader. She brings strategic planning, marketing, and retail experience from roles at Pillsbury and CNS—and, most recently, as general manager of Lakewinds Natural Foods, a co-op in the western suburbs.

“In five years, we can be four or five times the size we are now,” Trader believes.