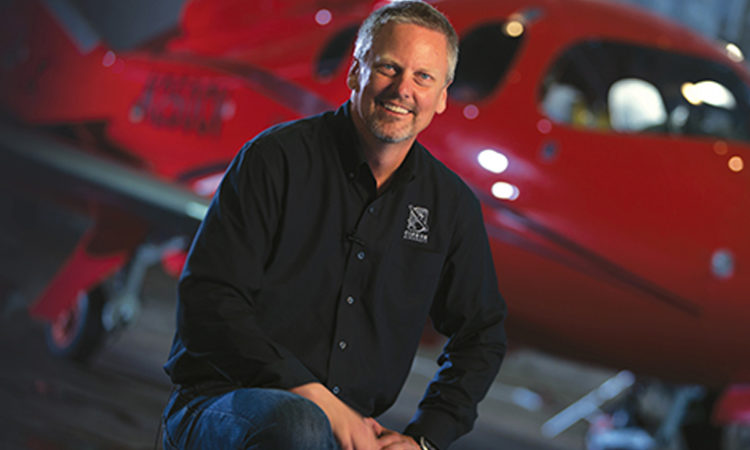 More than 30 years after founding the company with his brother, and a decade after becoming its sole leader, Klapmeier will transition into a senior advisory role.
By Amanda Ostuni
December 19, 2018

The co-founder and CEO of Cirrus Aircraft, Dale Klapmeier, announced he will step down from the top executive role sometime within the first half of 2019. He will transition into a senior advisory role, Cirrus said Wednesday.

Without the day-to-day operations on his shoulders, Klapmeier is anticipating he will have more time to work out long-term strategic opportunities for the company.

“Re-imagining personal transportation has been our lifelong mission at Cirrus Aircraft,” Klapmeier said in a statement. “We’ve changed the face of aviation over the past 30 years – from delivering more than 7,000 of the world’s best-selling high-performance piston aircraft, to fundamentally rethinking how we travel… to transforming our business into a lifestyle company that defines our path ahead.”

Klapmeier founded Cirrus Aircraft initially as Cirrus Design with his brother Alan Klapmeier in 1984, after graduating from the University of Wisconsin–Stevens Point. Out of the gate, the company focused on licensing plane design for production in Israel, as TCB noted a profile of Dale Klapmeier for his Minnesota Business Hall of Fame induction in 2015.

In 1994, Klapmeier moved the company from Wisconsin to Duluth, and began manufacturing its own planes, including the Cirrus SR20, which was the first certified aircraft on the market with a whole airframe parachute system.

“We were able to pull this off—kids that started in a barn in southern Wisconsin,” Kleipman told TCB three years ago. “We were able to build an extraordinary team of talent that made it possible to take the step into certified production aircraft.”

In 2001, Bahrain-based Arcapita assumed majority ownership of Cirrus, and in 2009, the company was re-named Cirrus Aircraft. That same year, Alan Klapmeier left Cirrus and Dale Klapmeier took over sole leadership.

Since then Dale Klapmeier has steered the company through the repercussions of the Great Recession and other ups and downs.

Under Klapmeier’s leadership, Cirrus opened its first aircraft test facility, the Vision Center, in Knoxville, Tennessee. Meanwhile, the company has continued to introduce new planes, most notably the award-winning Vision Jet, which was the world’s first single-engine personal jet certified by the Federal Aviation Administration.

The search for Klapmeier’s replacement as CEO is underway. The company said it will look both internally and externally for a new leader. A successor is expected to be found within the first half of the new year.

“I could not be more confident in the team and I am excited for what lies ahead for the entire Cirrus family,” Klapmeier said in prepared remarks. “For Cirrus Aircraft employees, partners and owners around the world, the best is yet to come.”