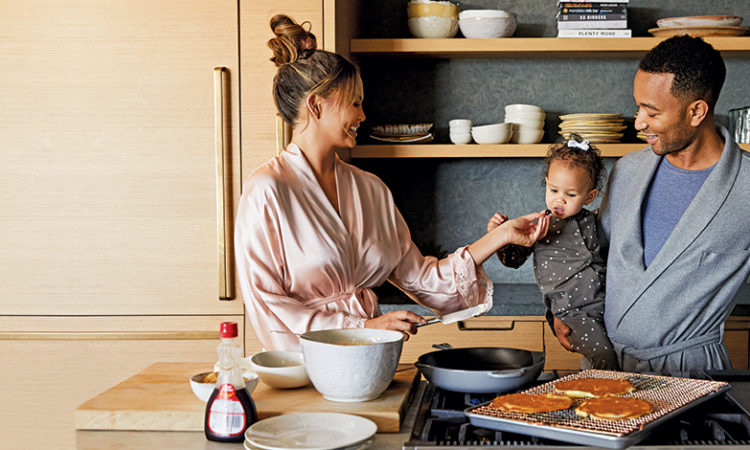 Chrissy Teigen is Right on Target

Target once again proves its knack for launching the right collaboration at the right time.
September 14, 2018

My mom thinks she’s friends with Chrissy Teigen. She tells me when Teigen gets a haircut, the silly song about headbands she made husband John Legend sing on her Instagram, what she’s making for dinner. She refers to her as, simply, “Chrissy.” Because, obviously.

I asked Mom how she came to be so enthralled by the model-turned-cookbook author and social media superstar. “I do not really know!” my mom replied via text. “I think it might have been when she was pregnant with Luna. Hard to remember. We’ve been close for so long.”

The thing is, 20.2 million on Instagram, and another 10.6 million on Twitter feel the exact same way about Teigen, whose “realness” does not come across as an act. She'll breast feed her daughter’s baby doll along with her real baby— to please her oldest, Luna (3 million likes on Instagram). She cops to posting pics that make her look better than her kids. She goofs around at fancy dinners. She doesn’t try to act like her life is not fabulous because, guys, it’s really fabulous. But in addition to the red carpet moments, she brings us John Legend—who recently became one of just 15 people and the first black man to achieve EGOT status, winning an Emmy in addition to his Grammy, Oscar, and Tony—singing about poopy booties while changing his daughter’s diaper. Hard to believe that would have happened without Teigen's encouragement. She brings out the funny—and everyone, including her husband, can’t help but smile.

But no one is smiling wider today than Target. The Minneapolis-based retailer announced at its fall meeting on Thursday, before 30,000 employees, an exclusive partnership with Teigen. The Cravings by Chrissy Teigen kitchen and tabletop collection launches Sept. 30 at Target stores and target.com. It's timed to coincide with the release of her second cookbook, Cravings: Hungry for More.

“I’M A TARGET TEAM MEMBER,” Teigen posted on Instagram along with a selfie including Legend, daughter Luna and Chief Merchandising Officer Mark Tritton with a sea of red and kahaki clad employees behind them at Target Center. She wore red; Legend dressed in khaki. More than a half million people “liked” that shot, one of four she posted on Thursday involving Target.

That’s better-than-prime-time reach these days. And while I don’t consider myself as close with Teigen as my mother does, I buy that she is excited about more than the Target paycheck. It’s full circle: Teigen’s very first modeling gig was for a Target swimsuit campaign.

“I remember they cast a younger girl as my little sister! We shot the campaign in an inflatable above-ground pool and I pretended my ‘little sister’ was spraying me with a hose,” Teigen said in an article on Target’s news site. “I think it was used in Target’s weekly ads, but I’ve actually never seen the photo! Please find it for me, Target!”

And you just know a team was immediately tasked with finding that photo for Chrissy (who also stared in Target’s 2016 holiday campaign). Can’t you just see the red and khaki crew brushing right past Fixer Upper’s Joanna Gaines (whose Hearth & Hand with Magnoia home collection is another Target exclusive) to get to Chrissy?

At a time when Target has proven it doesn’t need celebrities to drive new private label lines, with the launch of several smart collections with legs—including Universal Thread and Goodfellow & Co. for men; Cat & Jack for kids; A New Day, Joy Lab, and this weekend’s anticipated entry, Prologue, a modern line of basics designed to appeal to Everlane fans, for women—Target’s latest partnerships feel more authentic, more relationship-driven, and less about creating a weekend sell-out frenzy.

Teigen says she and her daughter make weekly Target runs. And we believe her.

Teigen’s Target collection includes more than 40 items ranging from $4 drinking glasses to $140 for a 12-piece cookware set. She says the “Go To” knife is her “everything.”

“It was the first thing we created. I have so many knives in my own kitchen, but always found myself gravitating towards my 7-inch chef’s and serrated knives. I always wished they would morph into one, so we did just that. It slices juicy tomatoes, steak and rustic loaves of bread perfectly. I truly love it,” she says in the article on Target's news site.

Then she added, “I think I’ll cry when people start tagging me in Instagram photos of them filled with their delicious food!”

My mother, and legions of other Chrissy fans, will be standing by with tissues.