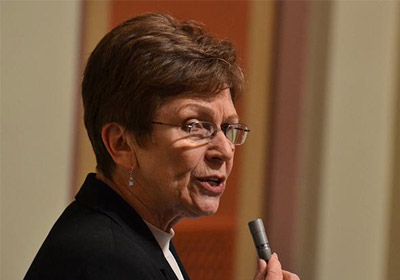 House Capital Investment Chairwoman Alice Hausman has introduced a $125 million proposal that pays cash for a handful of construction projects out of the state’s $1.2 billion surplus.
May 03, 2014

For some DFLers in the Minnesota Legislature, $1 billion isn’t a magic number.

For more than a decade, that’s been the status-quo cap on bonding proposals—even-year construction project packages on the state of Minnesota’s credit card.  As in previous sessions, current GOP and DFL legislative leadership have agreed to a $1 billion biennial cap.

But with extra money on this year’s bottom line, DFL legislators are finding ways to make that number go up without technically breaking their word.

House Capital Investment Chairwoman Alice Hausman has introduced a $125 million proposal that pays cash for a handful of construction projects out of the state’s $1.2 billion surplus. That’s on top of the $1 billion bonding cap ($150 million last session, $850 million this year).

Senate Democrats are still crafting their bonding bill, but Majority Leader Tom Bakk says they will pitch even more cash than the House into construction projects.

Republicans have criticized Democrats for spending more from the surplus rather than returning it in tax breaks. House Minority Leader Kurt Daudt said it’s “possible” the cash bill could get tangled up in broader bonding negotiations, but he plans to wait until he sees the final list of projects.

Lowering the bar for divisive projects

Traditional bonding bills require a three-fifths majority; the DFL is two votes short in the Senate and eight short in the House. In other words, for borrowing, Dems must lure GOP votes.

Cash projects only require a simple majority, and Democrats have comfortable margins there.

Hausman’s cash bill includes some projects that have clashed philosophically with Republicans.

Argues Dean, “Those are also dollars that could be going for lots of other good priorities in health and human services and education. It’s a priority decision. We think that we can fund the priorities of the capital investment needs within the $850 million.”

Despite the bonding-busting debate, proposals are missing full Capitol restoration funding, which Republicans support. The House bill includes a $15 million renovations placeholder, but the Department of Administration says the project needs $126 million this year.

Hausman says one reason for cash bonding is an out-of-date cap. “There is getting to be a feeling—because of a backlog of projects and because interest rates are coming in low—that it’s still a good year to be a bit more aggressive on bonding, but we have this psychological barrier with $1 billion,” Hausman said. “That psychological barrier is really hurting our state right now.”

There’s some precedent for paying for capital investment projects in cash.

Sitting on a nearly $2 million budget surplus in 1998, Republican Gov. Arne Carlson proposed the state’s first $1 billion bonding bill. Not only did that bill start the trend of $1 billion bonding packages, legislators also converted it into half-bonds, half-cash.

Former DFL Senate Majority Leader Roger Moe, who negotiated opposite Carlson, says sometimes projects are too volatile to be pass through traditional borrowing. He offered transit as an example.

“That’s just the political reality,” Moe said. “[Transit] is more of a rural and urban differential than a partisan one, but anything that gets the job done makes sense.”

The debate then was similar to the one lawmakers are having today: Is it better fiscal policy to spend the surplus on one-time projects, or should the money go back into Minnesotans' pockets via tax breaks?

Says current Senate Majority Leader David Hann: “Because there’s a so-called surplus shouldn’t be a license to spend more money. Democrats want to spend every dollar and every penny they can get their hands on.”

Jay Kiedrowski, a senior fellow at the University of Minnesota’s Humphrey School of Public Affairs, is more on board with one-time spending.

“Capital improvements are going to last for a long time, and theories suggest you should pay for it over the long term so that this generation isn’t paying for something that’s used by the next generation,” he said. “But clearly, one of the better uses of excess funds—if you aren’t going to put them in the reserve—is on one-time projects. It’s the ongoing spending that gets you in trouble in the next couple of years.”

Dean acknowledges that it’s common to spend some cash on capital projects that don’t meet bonding requirements. For example, “you can bond for a hockey rink but you can’t bond for a Zamboni,” says the Republican.

Kiedrowski notes the state’s debt policy allows it to pass more than a $1 billion bonding bill. “There’s nothing magic about the billion number,” he said.

Dayton, who earlier this year unveiled a $986 million bonding proposal on top of 2013's $150 million, has asked DFL leaders to break their handshake agreement with Republicans to not top the $1 billion biennial total. He argues interest rates are low and projects demand is high, making it unnecessary to spend cash.

Both Hann and Daudt say they will not bust the $850 million cap.

As this year’s earlier intra-DFL dust-ups demonstrated, the party going alone must sometimes deal-make with itself.

Hausman said the cash bill still needs to represent the whole state to get metro, rural and suburban Democratic votes.

Hausman says the cash list could get larger, especially if other legislators insist on full Capitol restoration funding. Dayton would also like to see full funding for St. Peter security hospital upgrades, which is included in his bill but not the House list of projects. Once the Senate releases its projects, the two chambers will have to work out their differences in conference committee.

“That’s still not going to be quite enough because of these big projects the governor wanted that didn’t fit in our bill,” Hausman said. “We could have even more cash or we could decide to go higher than $850 million in bonding.”